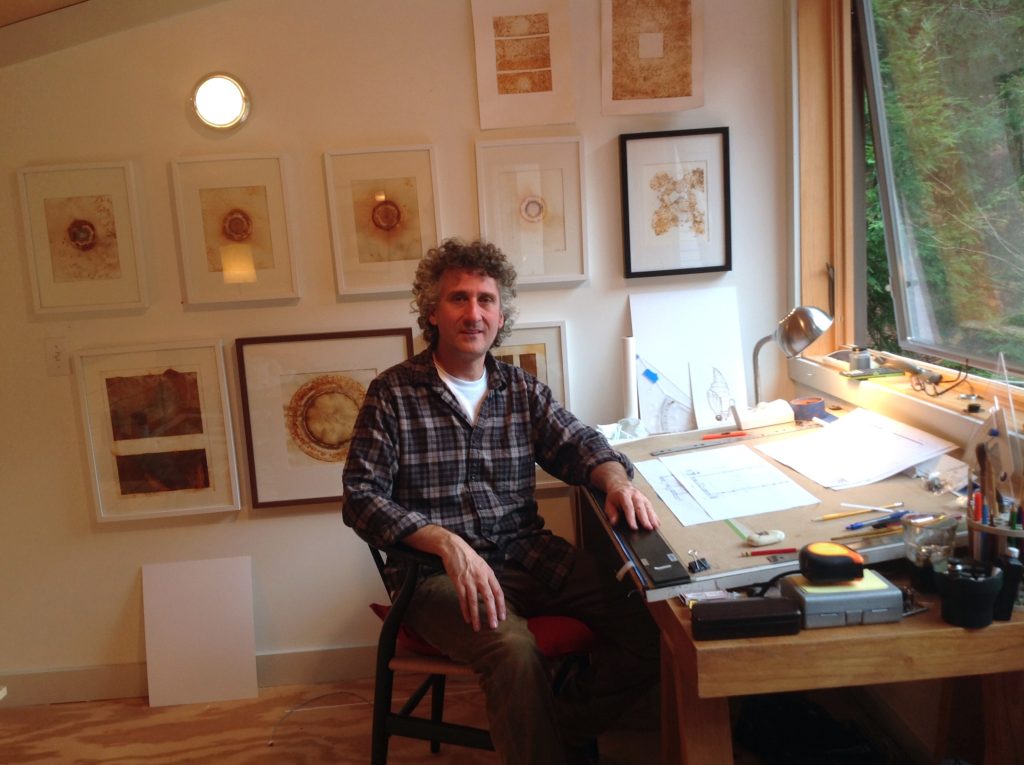 Ted Sheridan is more architect that artist, having designed the cozy studio attached to the house that he and Amy Masters share. He went into architecture because of his love of drawing which he has done since he was young: technical drawing and line drawing in pencil. “Even though computers have taken over the traditional drawing and drafting, I still hand draw a lot of my projects,” he says. As far as his artwork is concerned: “architecture is so controlled and precise, I was looking for ways to work in a medium that would work against that and be unpredictable, not be in control all the time.”

So he developed a style of print by working with iron powders and magnets on thick tough, cotton paper. The iron powder is finely ground and a grey color when its produced. He moves the powder around the paper, dragging it around using the magnets like a brush, getting a dry pattern that he thinks is interesting. Then he floods the paper with water. “It’s unpredictable because sometimes the iron powder moves and I get all these geometric shapes”.

Is that his only project as an artist? “I do a lot of watercolors and I love it but I found working with the iron opened a lot of doors for me. One of the things I had always tried to achieve with watercolor was impressions with flow and mass, abstract compositions, big fields of color colliding. One of things I found with the rust prints is they were evocative of geology, the heaviness of the earth and the power of water, flow and force. These were packing a punch in terms of conveying those impressions that I had been trying to create with watercolor. In architectural drawing, you’re always thinking about the lines that you’re drawing that are making something else (a building). Working with the iron and the water was really direct”.

One piece takes three weeks to develop – a total time of one month to complete and Ted has about 35 pieces available to sell.

“We’re still in the city, so it’s nice to work on a piece and then leave it and go back to the city. it’s nice to see how the piece has been rusting, while we’ve been gone.”

He just did a show at the Commons Gallery, is working on larger pieces and looking around for a place to show next summer. He will also be participating in the AMR Open Studios Tour in the Catskills next year.