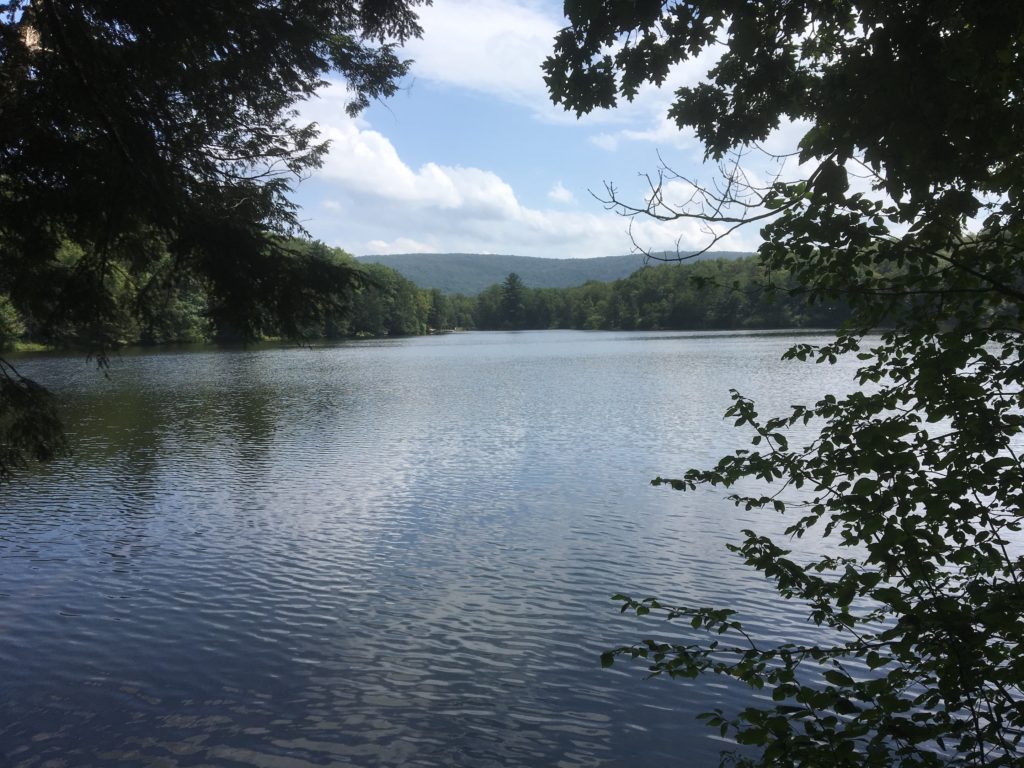 The Finger Lakes Trail wends through the Catskills, beginning at the western edge of the Slide Mountain Wilderness and continuing on to Downsville and way beyond, stretching for about 500 miles.

A few miles’ worth of the Catskills’ portion of the FL trail goes past Big Pond, and Little Pond (pictured above). The trail to Little Pond begins across the road from Big Pond’s small beach – and it’s even smaller parking lot – and forms a loop around Little Pond that’s made up of two trails: The Little Pond Trail and Touch-me-not Trail. END_OF_DOCUMENT_TOKEN_TO_BE_REPLACED 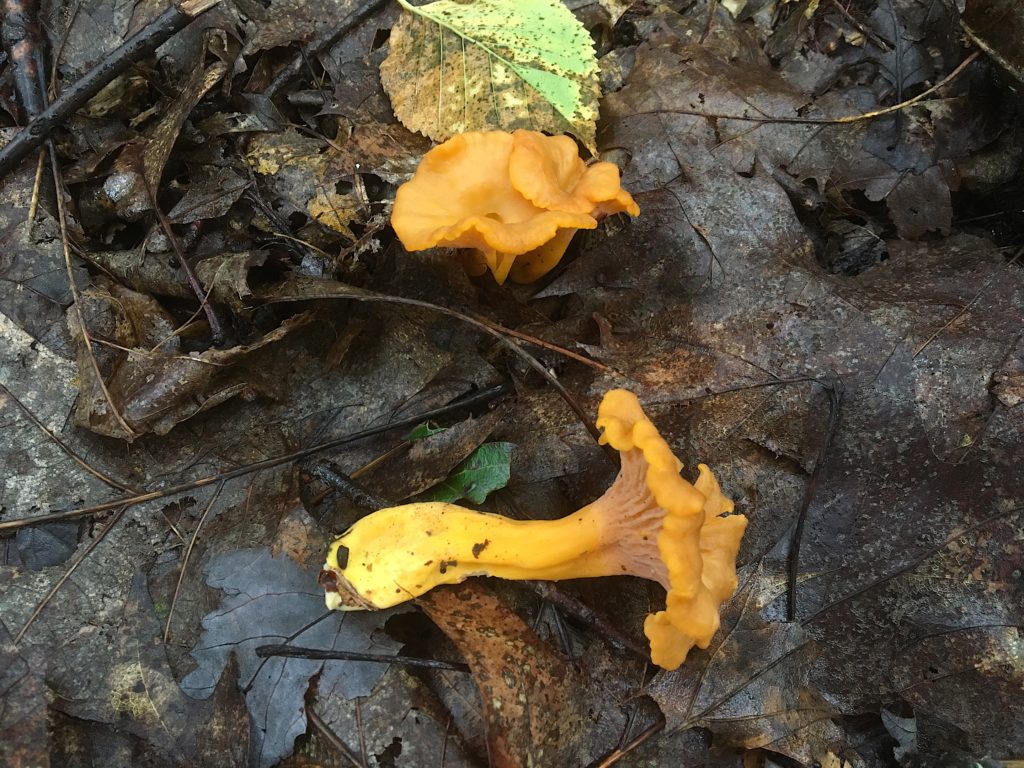 Chanterelles are in the same family as the northeastern Black Trumpets (Craterellus), but they have a few toxic look-a-likes, so they’re much trickier to identify than Black Trumpets. When you’re foraging for mushrooms, a positive identification is essential before you even think about eating. For example, there are plenty of bright orange mushrooms in the forest that you should not eat and so if there is any confusion, forget it. The intricacies of mushroom hunting are so varied and convoluted that, for the layman, most mushrooms are not worth the risk of misidentification. Rest assured that mycology – the study of fungi –  is a lifetime of learning and that most of what you find in the forest should be left alone.

So – to identify these chanterelles pictured here, as I did with the boletes I found two years ago, I sought the opinions of at least two experienced foragers to help identify them. END_OF_DOCUMENT_TOKEN_TO_BE_REPLACED

Partly cloudy with rain showers and a cool breeze in the trees. A high of 75F. Chanterelles decorate the forest like jewels. 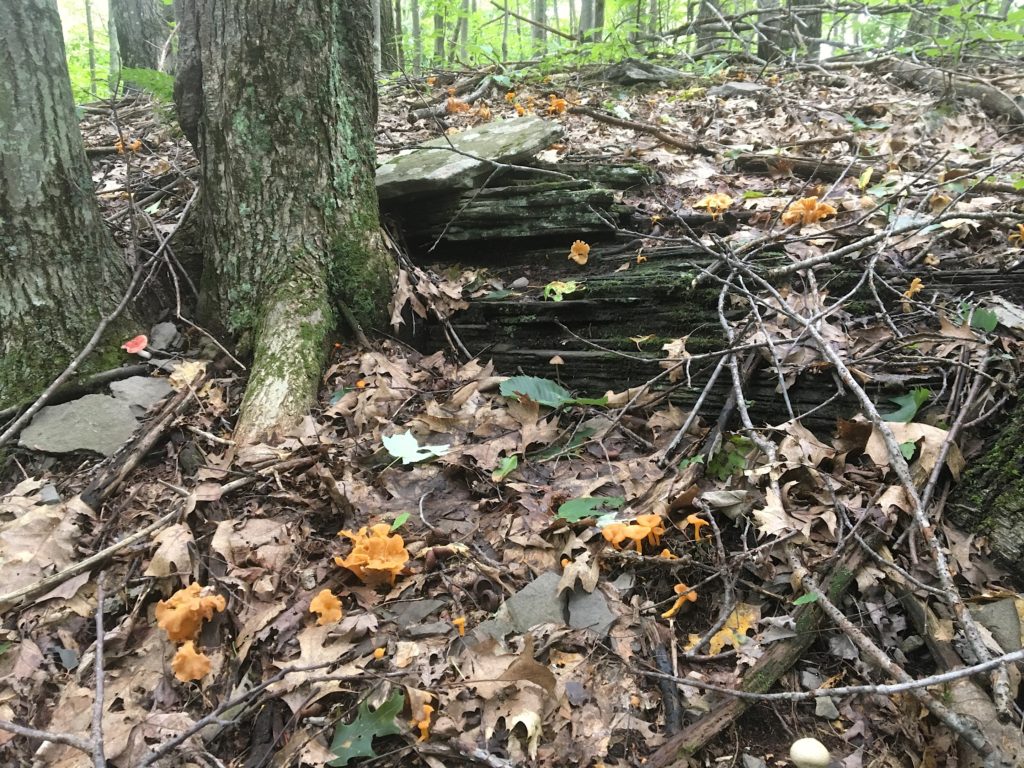 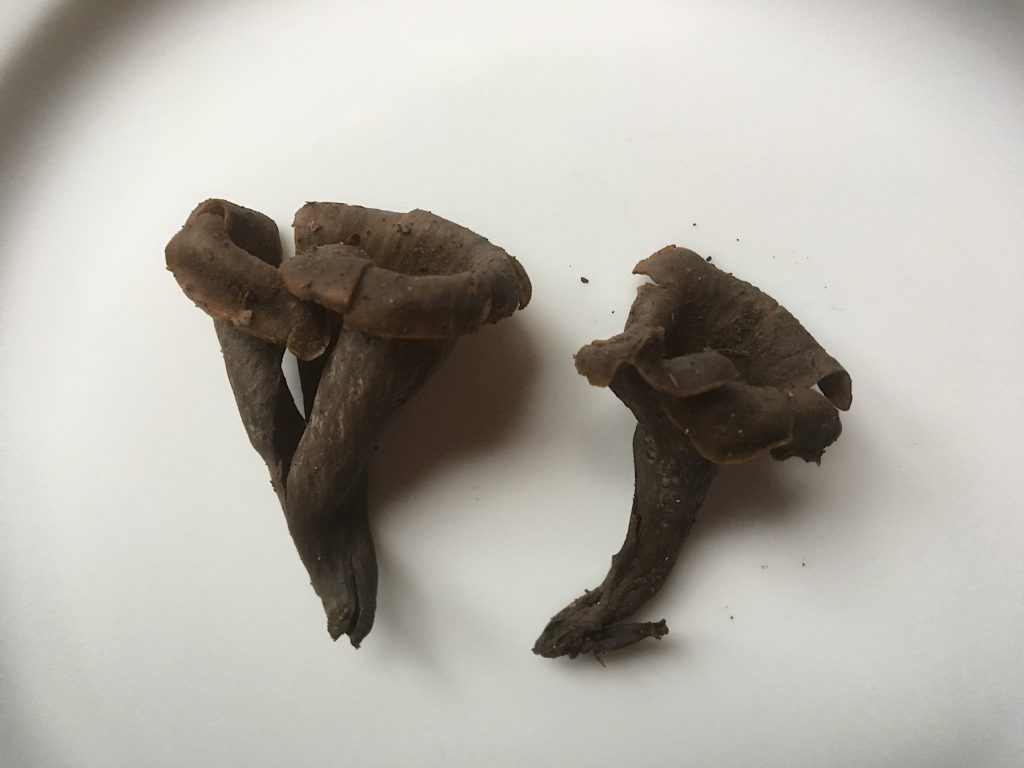 Like Lion’s Mane that I wrote about last year, Black Trumpet mushrooms are easy for the novice forager to identify because they don’t have any toxic look-a-likes. Plus, like Lion’s Mane they are absolutely delicious: earthy, aromatic and deeply flavorful, possibly one of the best smelling and tasting mushrooms out of all the top edibles.

To the layman, they could possibly look like, perhaps Devil’s Urn, little, round cups that grow on rotting wood but even then, the Devil’s Urn only appears in spring. Wood Ear could also be considered similar, but wood ear looks like, well, a brownish/black, flattened ear. There are black boletes, but they have pores not gills. It should be noted here that if you’re going to learn about mushrooms, a pocket guide is essential and you should have a good few year’s worth of mushroom-hunting experience before you start thinking about eating anything without at least two positive ID’s from experts. A novice should always have a mentor. Plus, most important, mushrooms affect people in different ways. Some people can’t even tolerate edible mushrooms and you may have an allergy of which you are unaware. END_OF_DOCUMENT_TOKEN_TO_BE_REPLACED

Dark and gloomy for most of the day with a high of 75F and very humid. Intermittent rain showers flooding roads and filling reservoirs over their brim. Soggy. 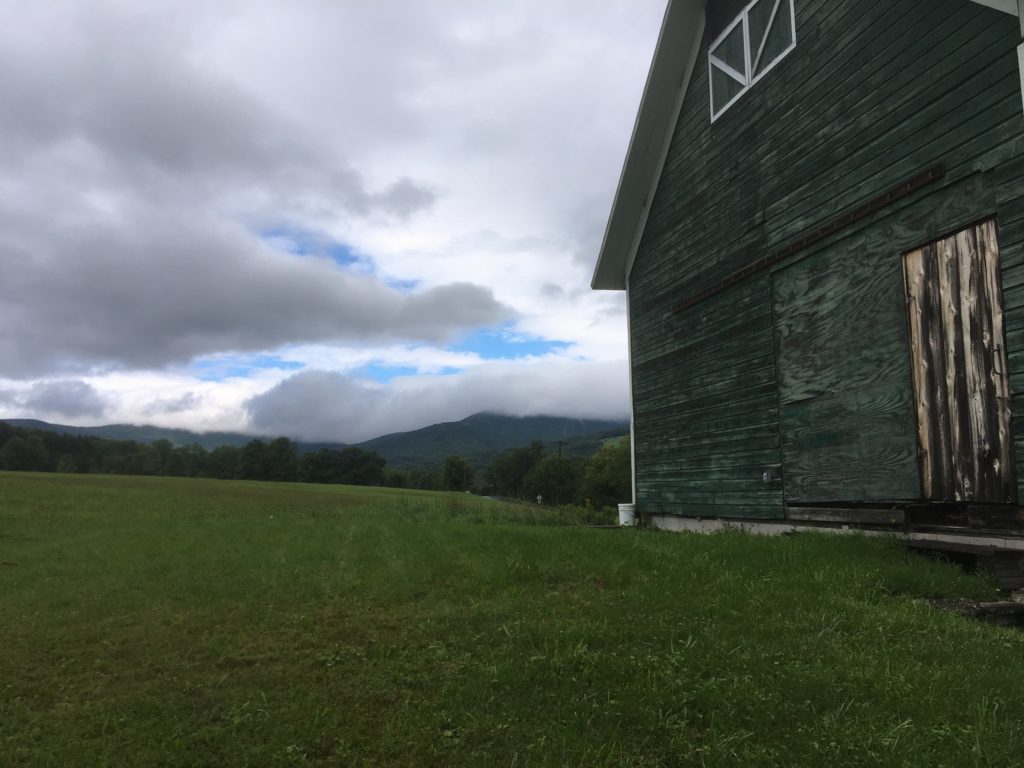 A rainy, soggy morning with a brief interlude of warming sun around midday with brief periods of sunshine, returning to torrential rain and thunderstorms late afternoon. A high of 80F. 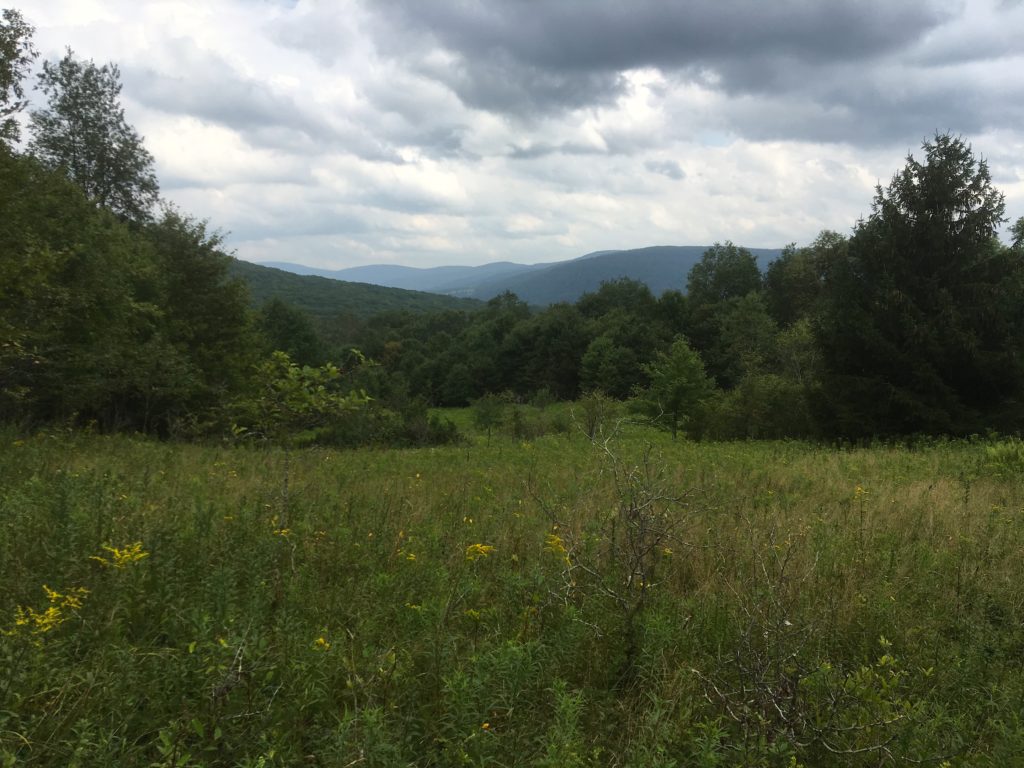 A dull, foggy, humid start rising to an 87F high by late afternoon with blazing sun. Hordes of post-rain mushrooms stage a revolution on the forest floor. 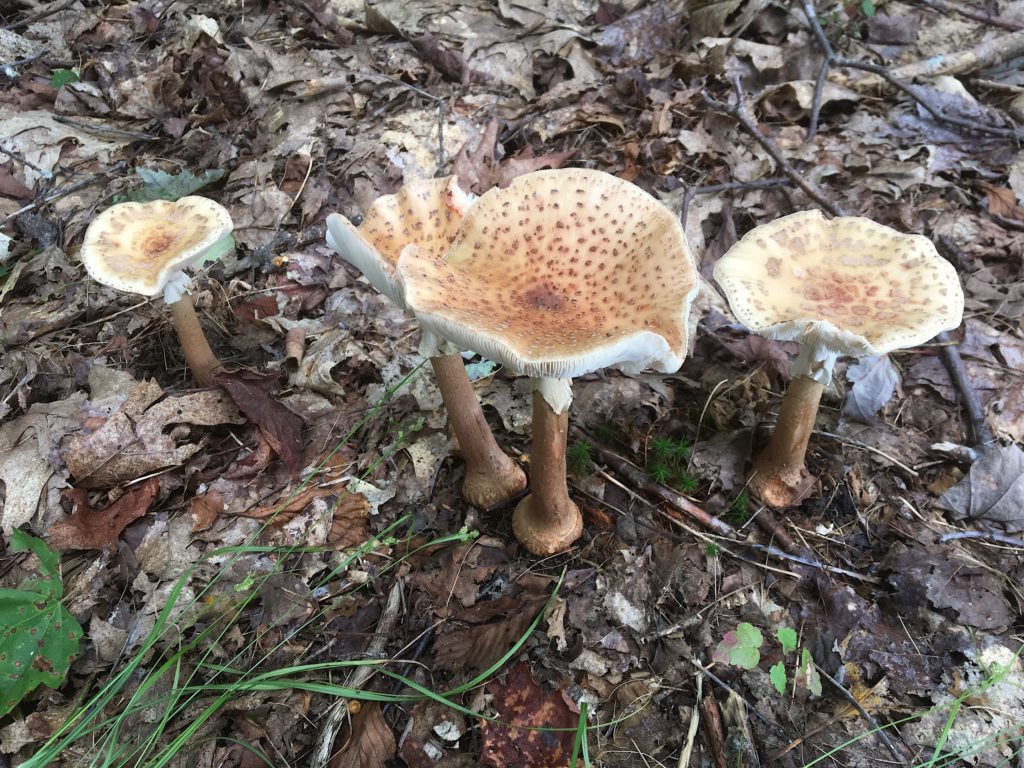 “I remember when you went for a job and there were signs saying WOMEN NOT WANTED or MEN ONLY or BOYS ONLY”.

Reportedly, this year the US has had a record number of female political candidates running for office. Joyce St. George is one of these women. Joyce was a guest on my radio show on April 30th and we talked about some aspects of her career, being a woman in politics, her career in law enforcement, her run for state senate and what she does to unwind (she also practices and teaches karate here in the Catskills).

Joyce is a powerhouse with an intimidating resume. She began her career in the 1970s, when she became the first female investigator to serve in the New York State Attorney General’s Special Prosecutor’s Office on Anti-Corruption. Following the dramatic testimony of Frank Serpico, Joyce and her colleagues rooted out corruption within the criminal justice system in NYC, investigating police officers, judges and district attorneys. That was only the beginning of her career and I’m wondering why nobody’s made a movie about Joyce herself.

Joyce is approachable, affable and engaging with a big heart. With her husband Frank Canavan, she works with the Margaretville Food Pantry that serves 500 local families. Joyce was hired by FEMA to provide crisis services in Delaware County following the floods from Hurricane Irene and Tropical Storm Lee, and served on the Flood Mitigation Council for the area.

A high of 81F and overcast with brief flashes of sunshine and afternoon thunder storms. 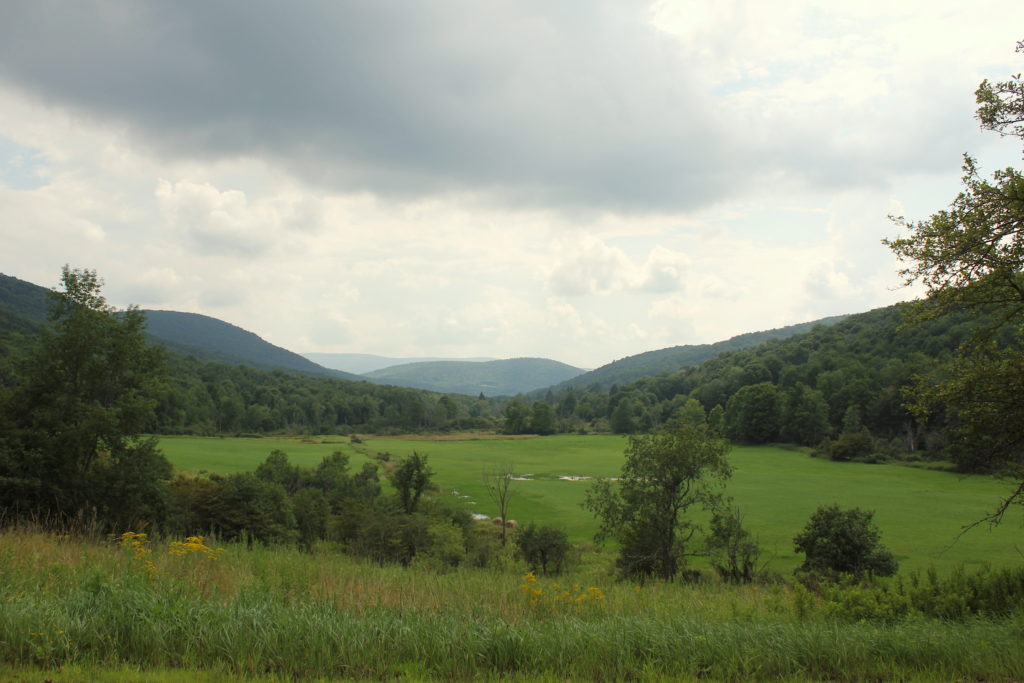 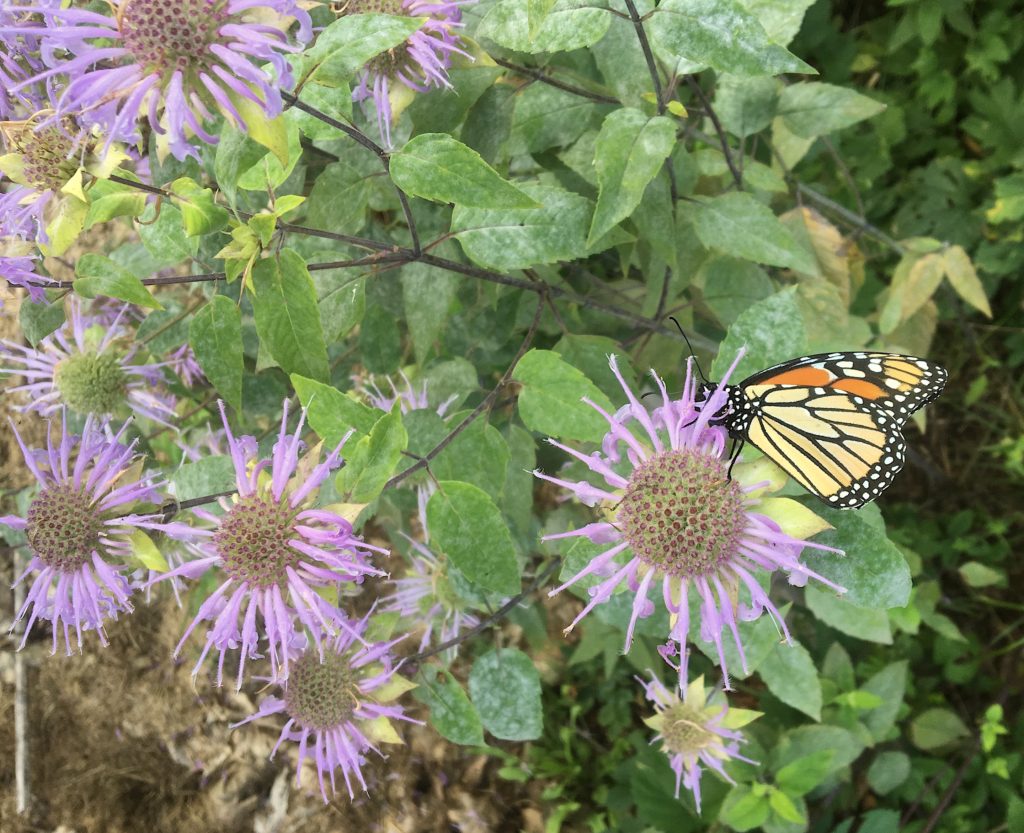 Early morning sun barely breaking through thick fog. Overcast and humid with periods of break out sun, a torrential afternoon shower, and a high of 83F. The Catskills is a rain forest, consisting of a innumerable number of creeks, streams and rivers in a world that is running out of fresh water. 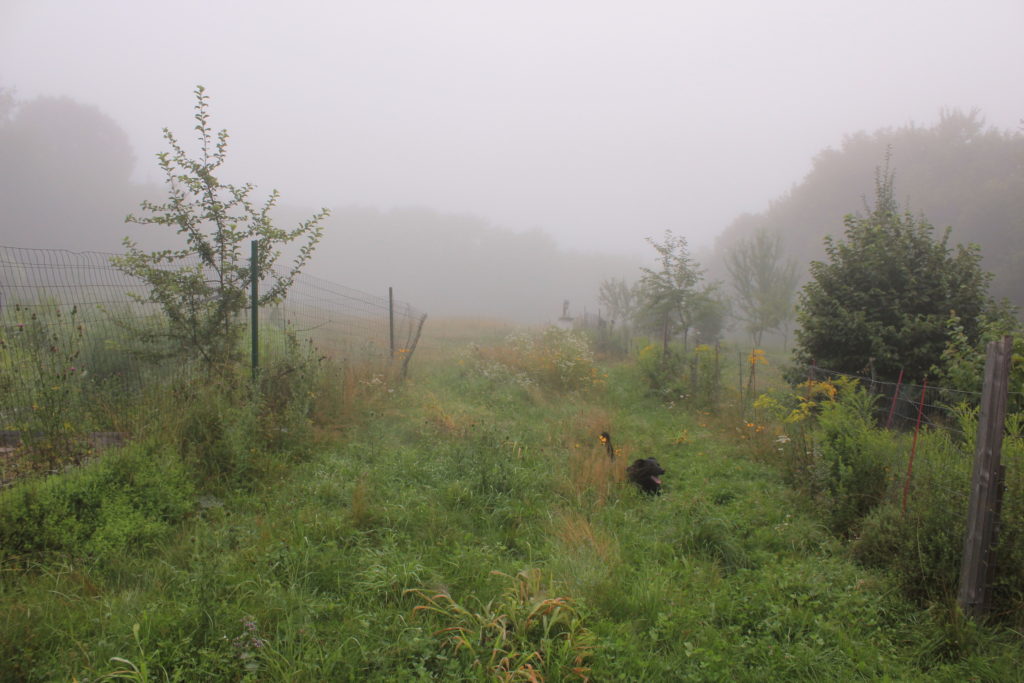 Humid with a high of 87F with a mix of sun and clouds with afternoon thunder storms clearing up by evening. 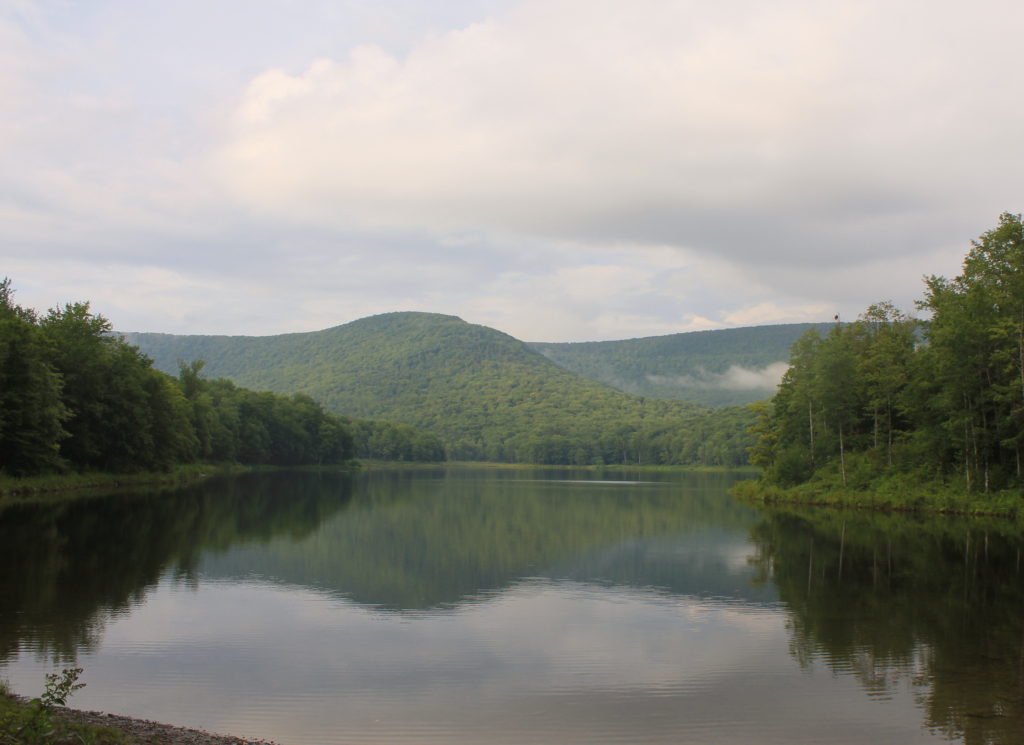 I discovered the American writer Linda Leaming when I read her book, Married to Bhutan in which she describes her life in Bhutan after she first went there to teach English twenty years ago. Her story was extraordinarily familiar to mine. Like Linda, I also moved to another country to work, married a foreigner and ended up making a home in an unfamiliar mountainous region – The Catskills – but Bhutan is more or less the exact opposite of America. Although what the two countries have in common is a populace that works very hard, there are so many striking differences – like their happiness despite the comparative lack of convenience. Americans are devoted to the pursuit of happiness, but the Bhutanese actually have actually achieved it. Bhutan’s secret to happiness is time plus the nurture of its environment, which comes at the expense of the aforementioned convenience. Americans can learn a lot from both the Bhutanese and the people of the Catskills (more on that later).

This podcast was taped back in 2012, one of my first interviews conducted on WIOX and the one that has received the most feedback. I hope you find it as fascinating as I do all these years later. Find her husband’s artwork here.

A foggy start to the day and a high of 90F and humid with cloud sailing through a hazy sky like apparitions. 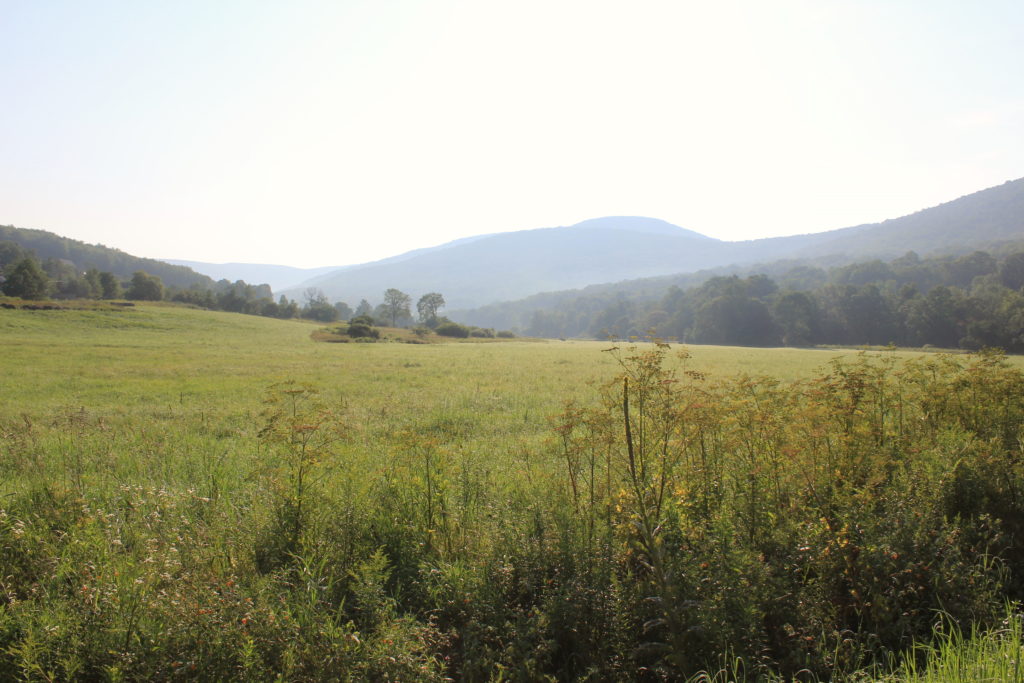 After a week of torrential rain, a day of blazing sun. A high of about 90F on the mountain tops. 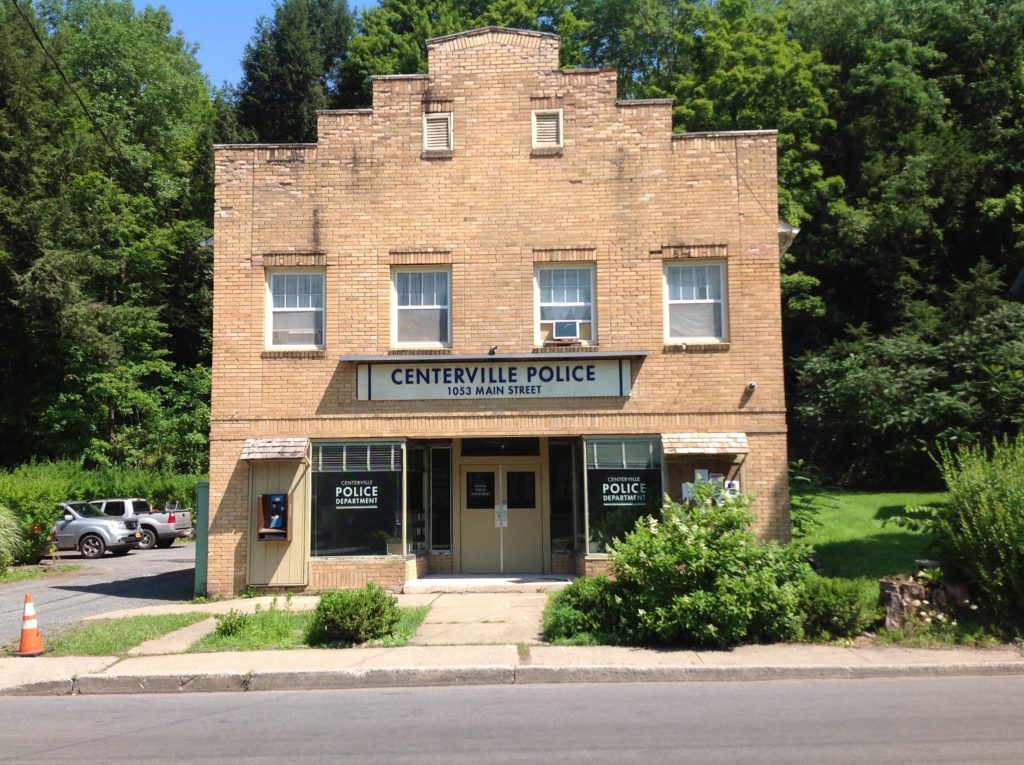 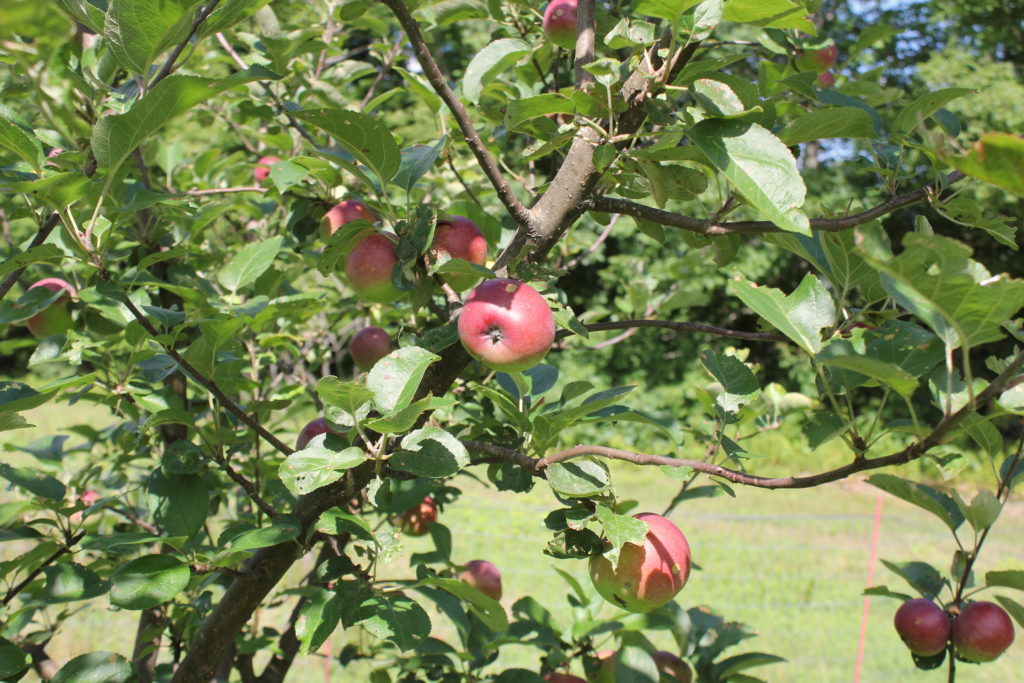 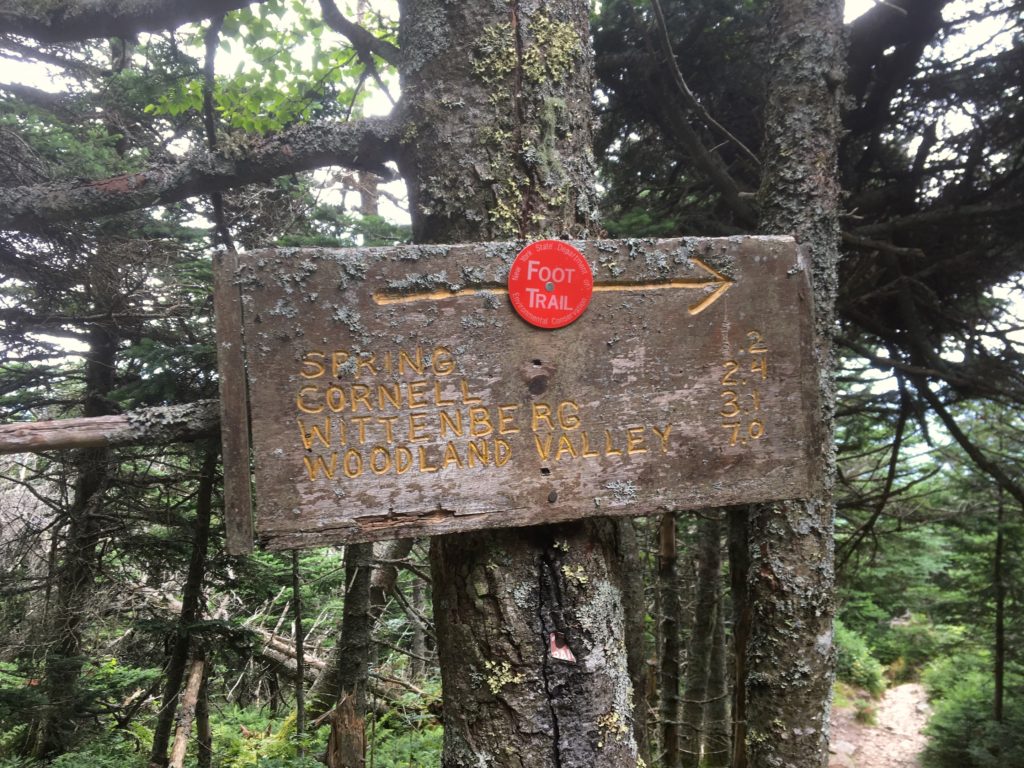 John Burroughs couldn’t have picked a range of mountains to frequent that’s more demanding for the hiker, but according to the DEC it’s the most popular range in the Catskills Forest Preserve. It’s probably popular because it has the most interesting network of trail hikes, but it’s extremely challenging in parts, the Slide Trail (between the summits of Slide and Cornell) feeling like a craggy, sheer rock-face covered in trees. END_OF_DOCUMENT_TOKEN_TO_BE_REPLACED 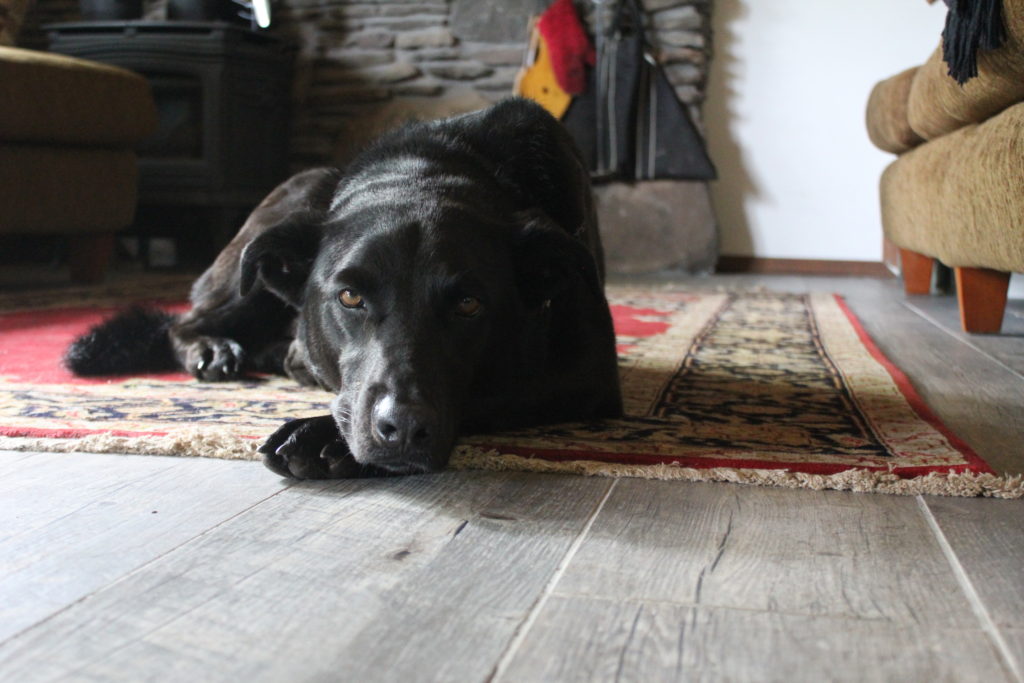 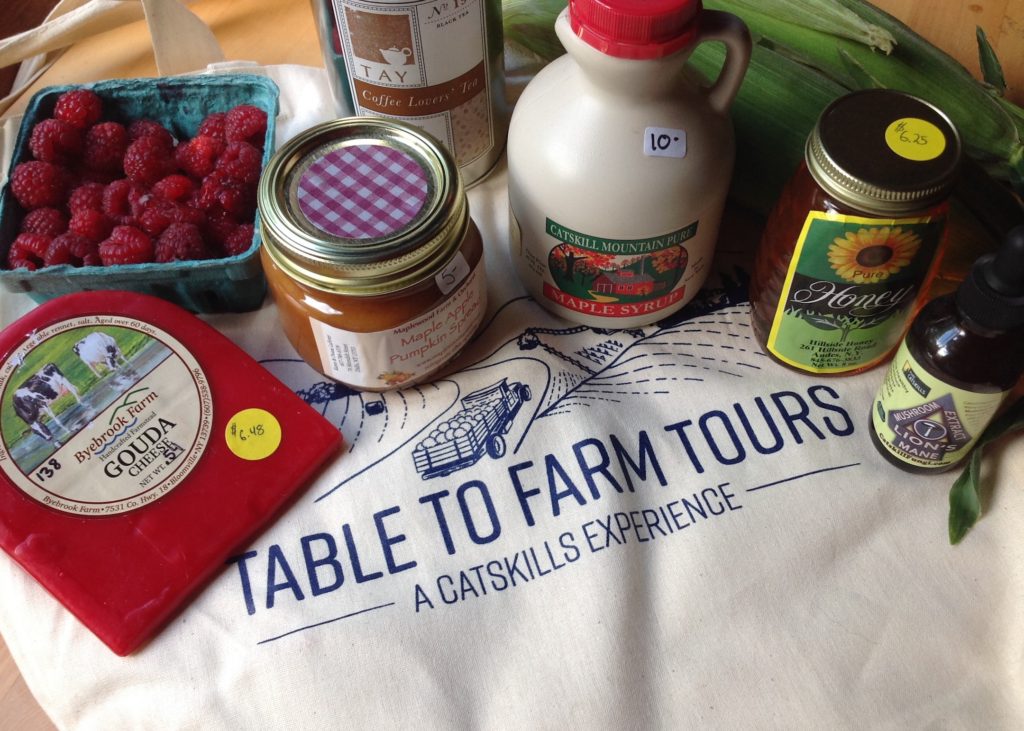 Three pitstops to farm stores on the Table to Farm Tours today: Catskills Regional Harvest, a food business incubator, farm store and event space run by Nicole Day Gray, Burnett Farm stand in Bovina and Burn Ayr Farm, which is actually past Bovina and closer to Delhi, with a small inn on site that’s set on the babbling Little Delaware River. END_OF_DOCUMENT_TOKEN_TO_BE_REPLACED

After a 71F, rainy, humid, overcast morning a late blooming day rising to a high of 82F and dry at 5pm. Update: more rain later on. 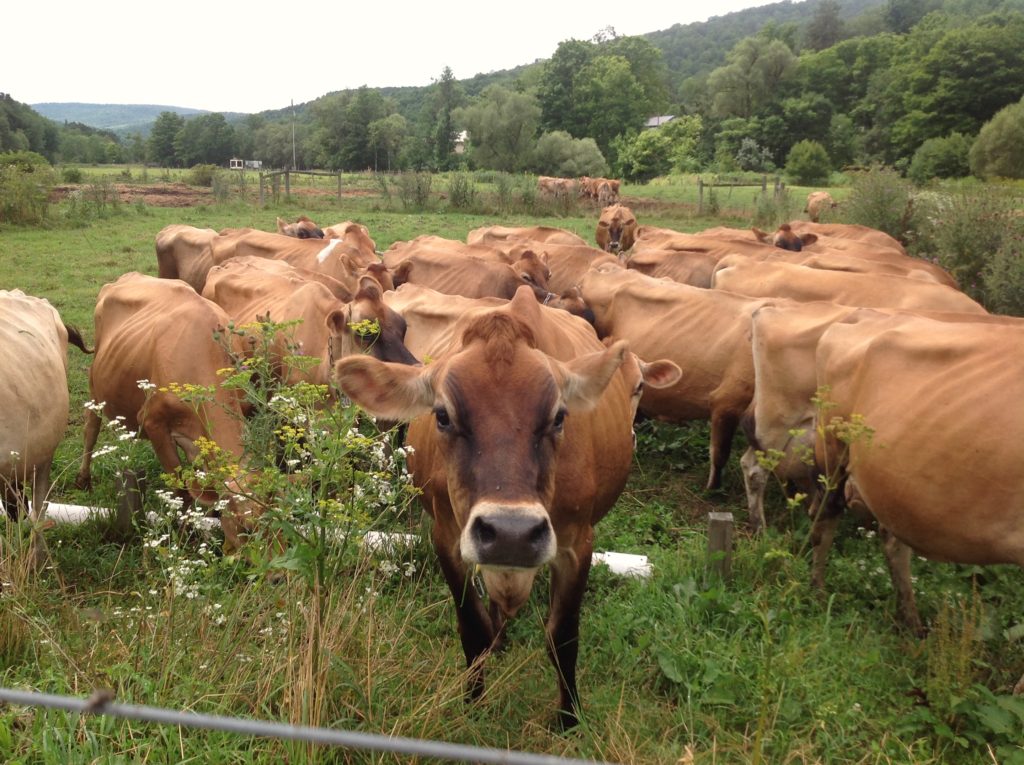