A balmy high of 54F, sunny and warm, with soggy ground and deep, rushing rivers. 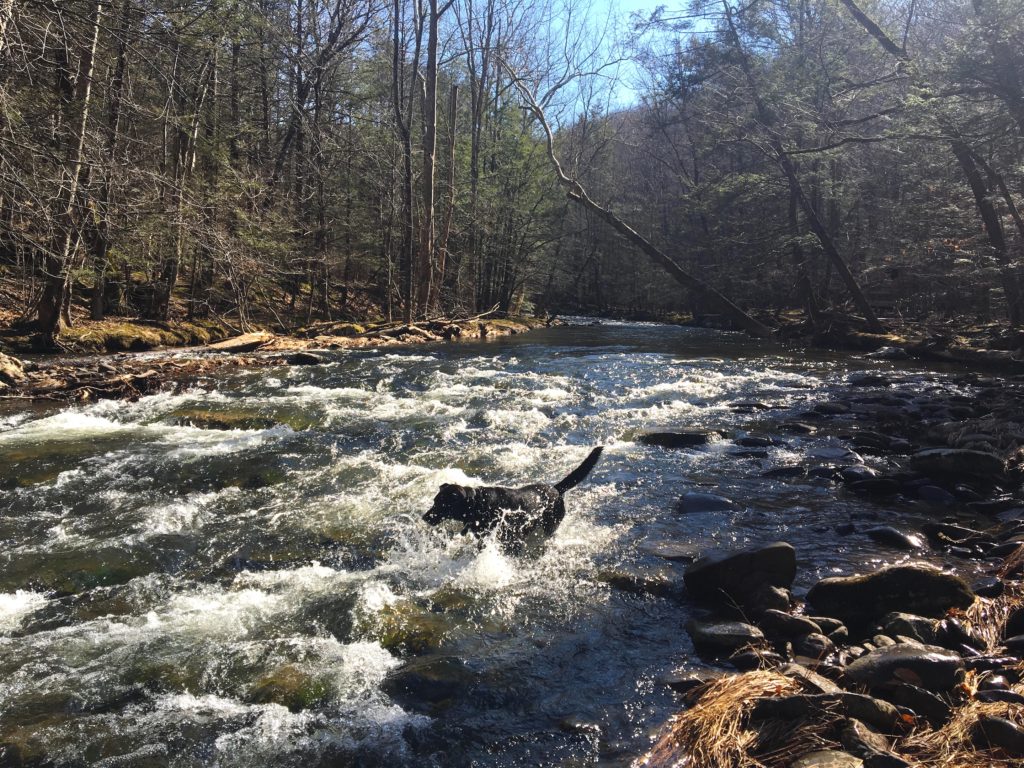 Overnight rain continues into morning. Heavily overcast with rippling cloud and light snow caps on the tips of mountains. More rain, and a high of 37F. 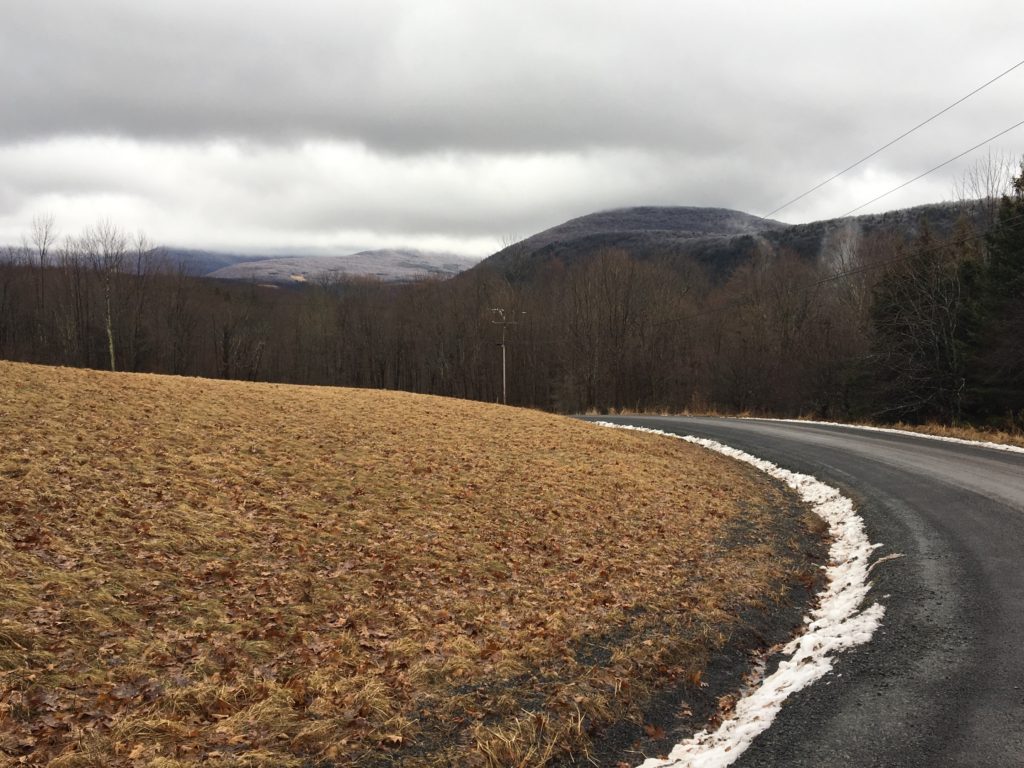 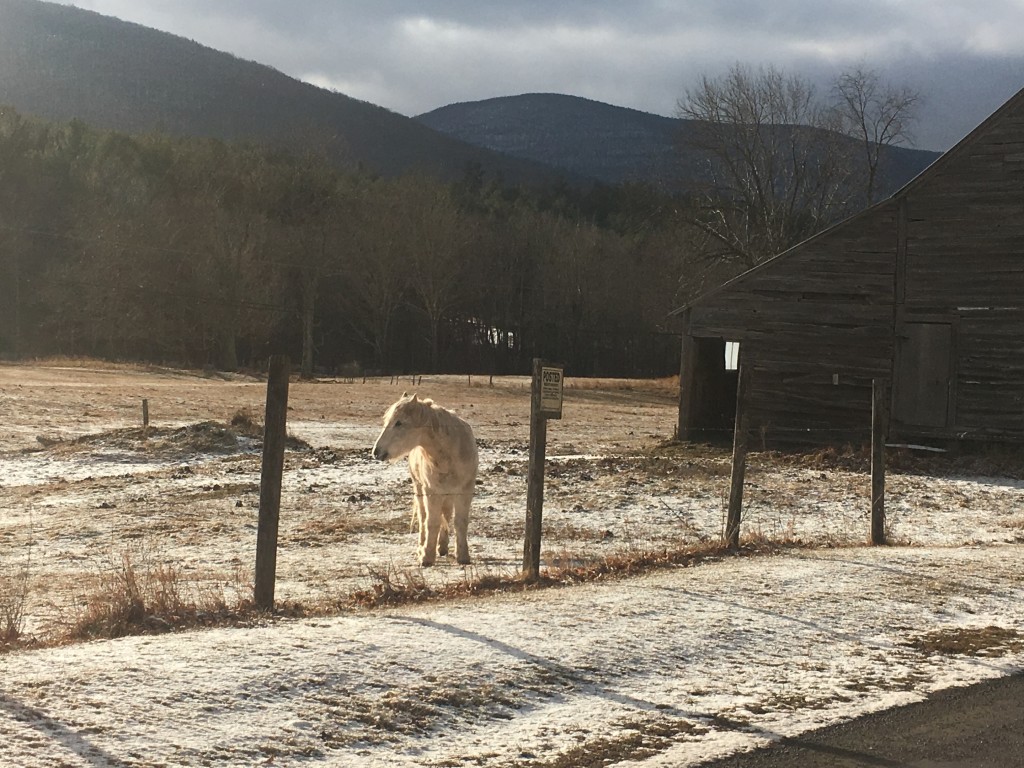 It’s been an interesting week, in terms of weather. We’ve had high temperatures that have dried laundry in hours, rain, freezing low temperatures, snow and then more soaking rain. It’s still a bit squidgy out there today as the snow melts. Upstate Dispatch has been transformed into an editing suite most of the week, with the highly addictive ProTools, preparing a podcast series.

Here are some of the week’s links and happenings, locally and internationally.

Fly fishing clinic at Westkill Brewery Sunday February 25th. Beer and fishing? The two go together like cheese and biscuits.

Miss Mustard Seed’s Milk Paint 101 Class at Hudson Valley Vintage in Rhinebeck, NY. Milk Paint has been around for over a thousand years and contains only five 100% natural ingredients. Leave the class with a painted project.

Yoga in the Catskills: near Phoenicia, NY.

Progress made in sustainable agriculture in Holland from National Geographic. “How The Netherlands Feeds The World”. And hydroponic greens grown by AeroFarms in Newark.

The Greenhorns and their farmer’s almanac.

A high of 34F with crunchy snow underfoot and an afternoon snow storm that dumped several inches of powder. Yesterday laundry day. Today not so much. 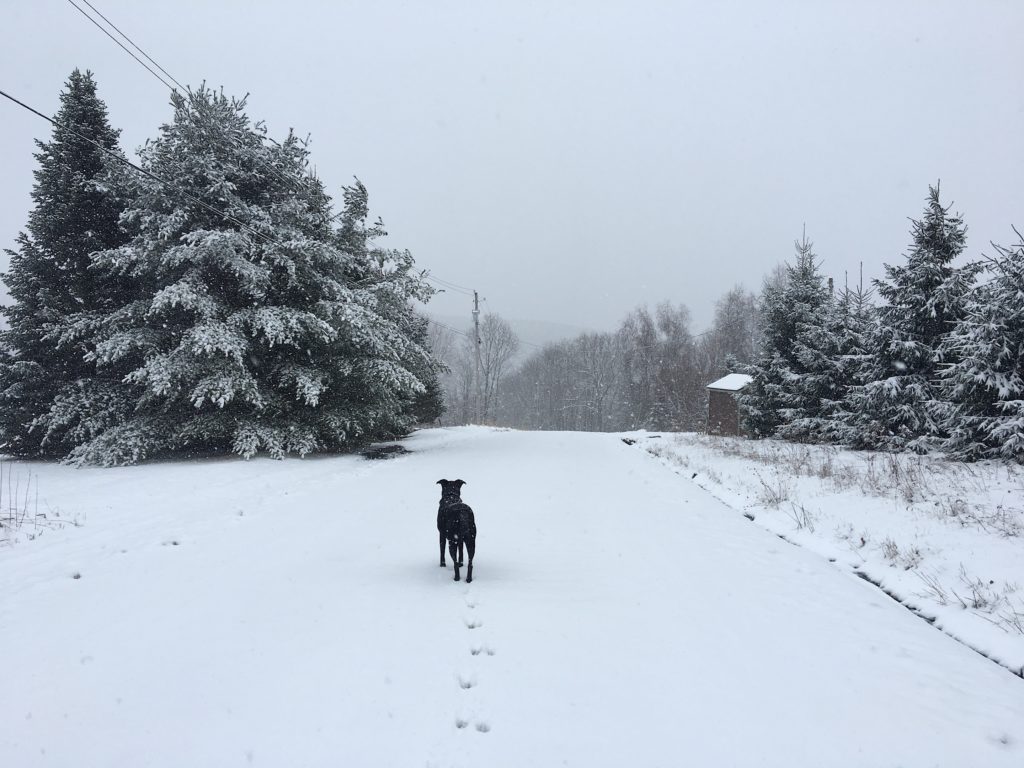 An even more balmy day after yesterday’s high of 62F. Humid and cloudy with lunchtime sunshine, a strong breeze and a high of 74F. Laundry weather for one day. 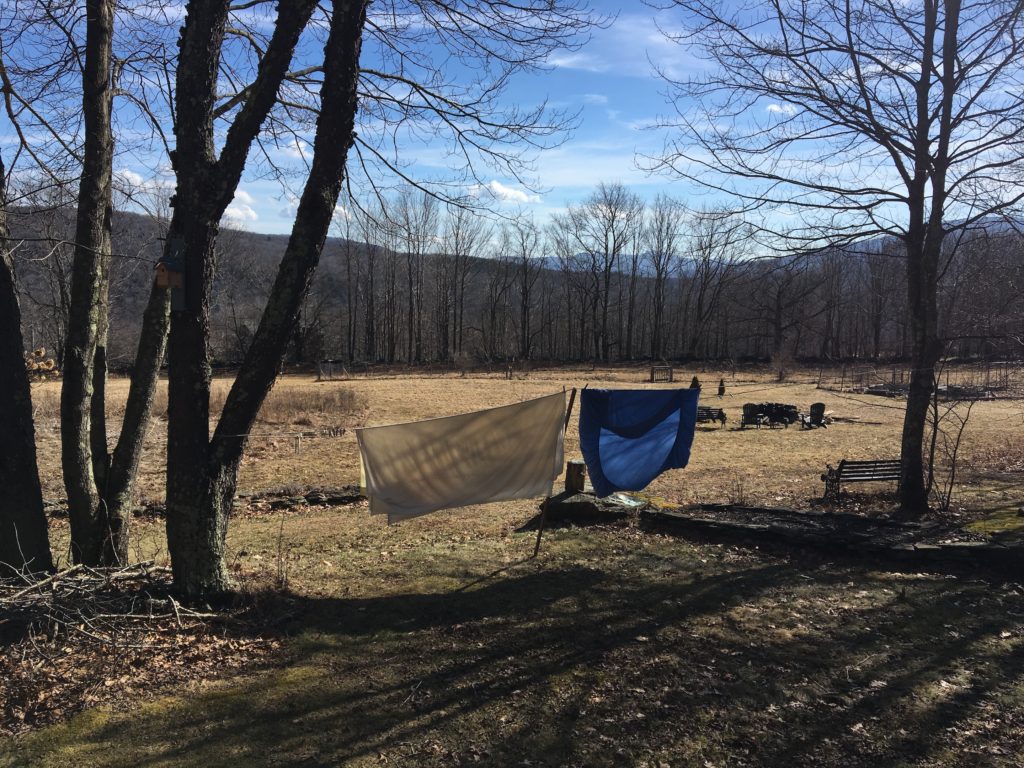 For the sixth anniversary of my radio show, I’m turning some of my interviews with the most interesting guests into podcasts. Click on the orange arrow above to hear the podcast.

On Christmas 2014, I interviewed Mike Cioffi of the now famous Phoenicia Diner in Phoenicia on Route 28 in the Catskills. Mike was a fantastic guest talking about growing up in Brooklyn, his love of food, running a business and how he set up the diner.

A high of 41F and overcast with late afternoon rain giving the mountains a thorough soaking. 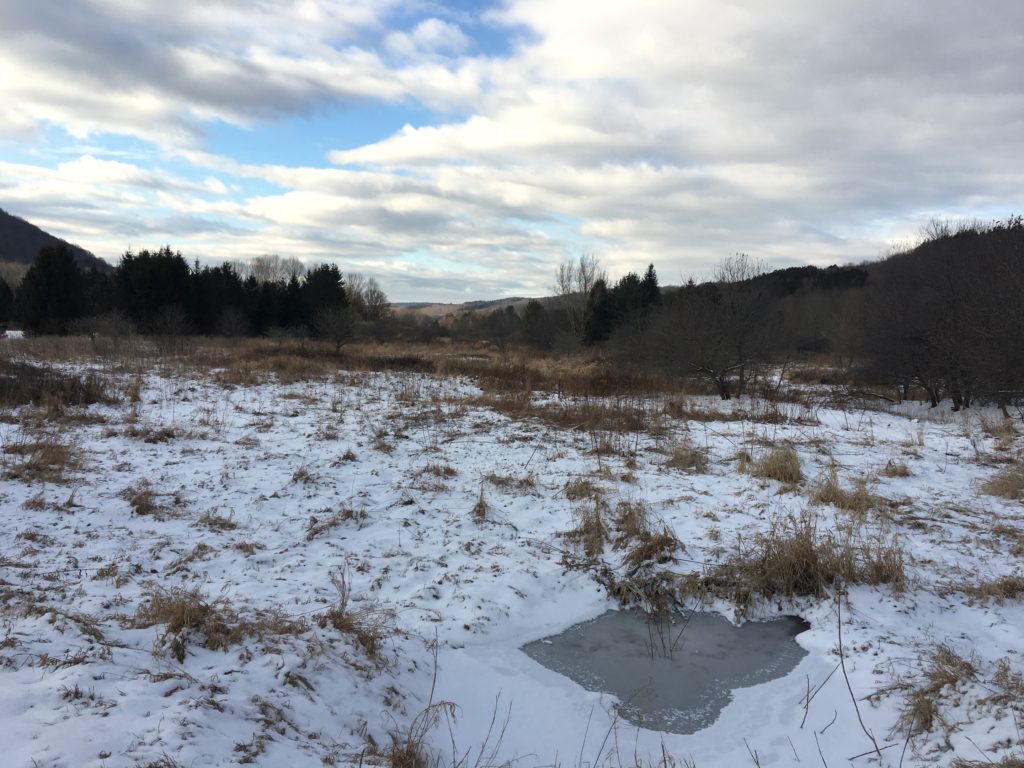 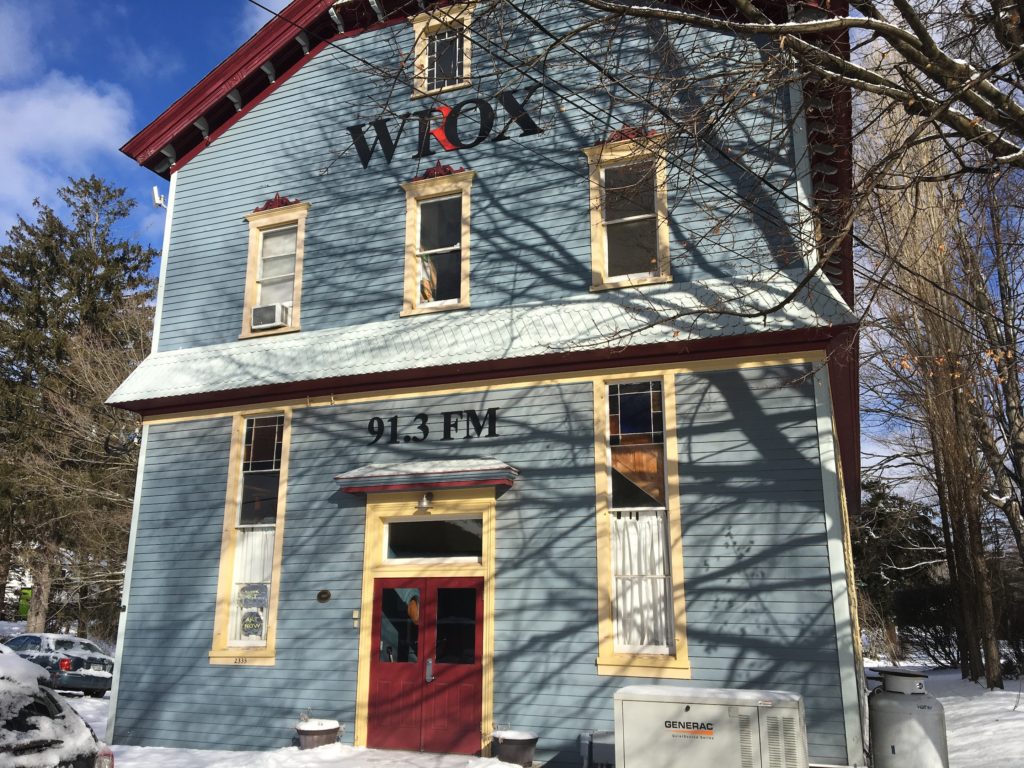 For me, February 22nd, will mark six years of my public radio career on WIOX in Roxbury, Upstate New York. Our “wildly diverse, live and local”, progressive little radio station in the heart of picturesque Catskills is a hive of activity, broadcasting locally on 91.3FM and streaming online on www.wioxradio.org. WIOX is now an NPR affiliate, having partnered with WSKG in Binghamton.

The whole endeavor has been an education and the setting couldn’t be more gorgeous: a converted barn in one of the most picturesque villages in the area. I believe my commute is one of the most documented in the region. A brief history: In late 2011, after spending more than ten years traveling back and forth between the US, Europe, and sometimes the rest of the world, I returned to my house in the Catskills and decided to make a life here. I felt lucky.* END_OF_DOCUMENT_TOKEN_TO_BE_REPLACED 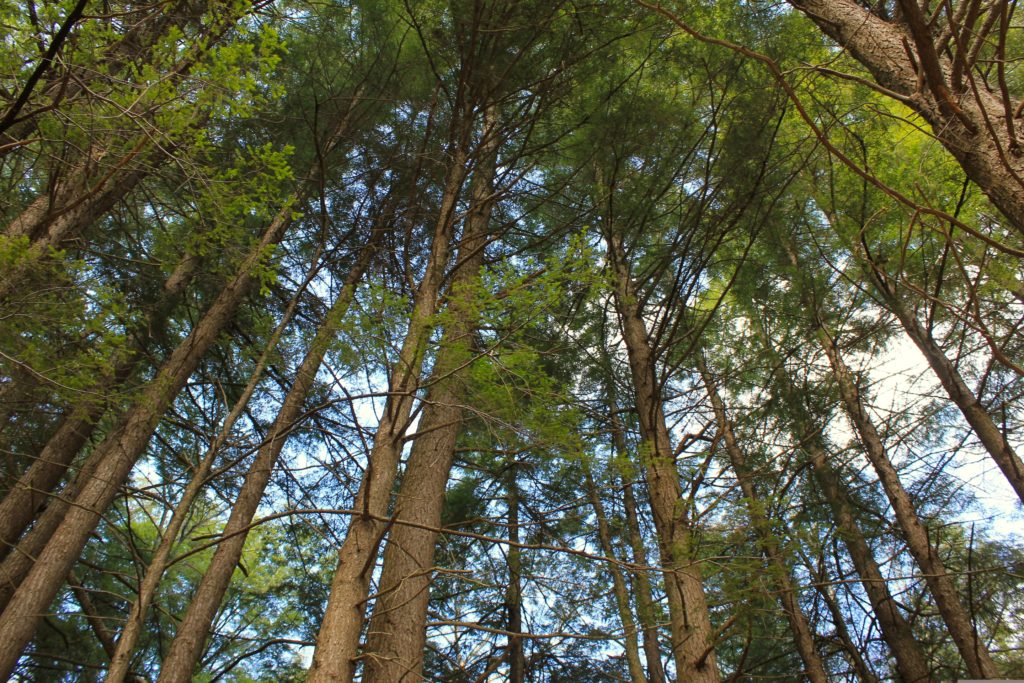 Catskills’ Writer and naturalist John Burroughs (1837-1921) called hemlock forests “…dark, sheltered retreats” and there is an earthy stillness in a hemlock forest that’s incomparable with the rest of the rocky Catskills forest. The trees are tall, majestic statesmen, all going in the same direction, unwavering in their straightness, like woodland sentries guarding over life below them. Hemlock forest floors are a thick, bouncy carpet made of billions of hemlock needles which seems to absorb all the sound, and the bark is a rich brown that soaks up the light. On bright, cloudless, sun-filled days, beams of sunlight break through the hemlock canopy like flashlights pointing from above into the tranquil haven. The smell is intoxicating.

“Their history is of a heroic cast,” wrote Burroughs of the hemlocks. “Ravished and torn by the tanner in his thirst for bark, preyed upon by the lumberman, assaulted and beaten back by the settler, still their spirit has never been broken, their energies never paralyzed.”

Here in the Catskills, again the hemlocks are under attack due to the long march of the Hemlock Wooly Adelgid, a pest that has been ravaging our local population of hemlocks since the 1980s. Signs that your hemlocks are under attack are pretty obvious. If you observe a thick, white foam on the underside of the hemlock leaves, you should send an email to: DSNIDER@CATSKILLCENTER.ORG who works with CRISP, the Catskills Regional Invasive Species Prevention project run by the Catskill Center that is now using biological methods to counter the pests. END_OF_DOCUMENT_TOKEN_TO_BE_REPLACED 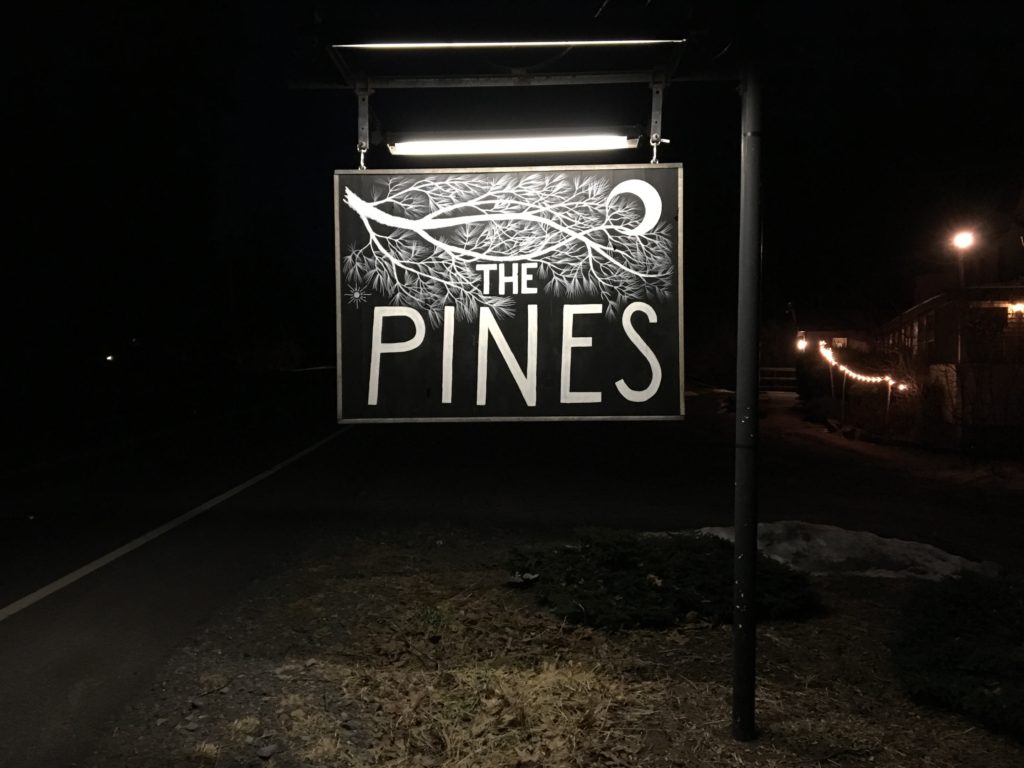 Turns out this local gem is situated just a walk up the road from the crossroads of Wittenberg and Route 212 in Mount Tremper. If you have loved ones coming in on the Pine Hill Trailways bus from New York City, the bus driver will allow them to alight at this crossroads and walk a few minutes up Route 212 to The Pines. Once there, they can drink a lot and have their host drive them back to their digs for the weekend. How convenient is that? END_OF_DOCUMENT_TOKEN_TO_BE_REPLACED 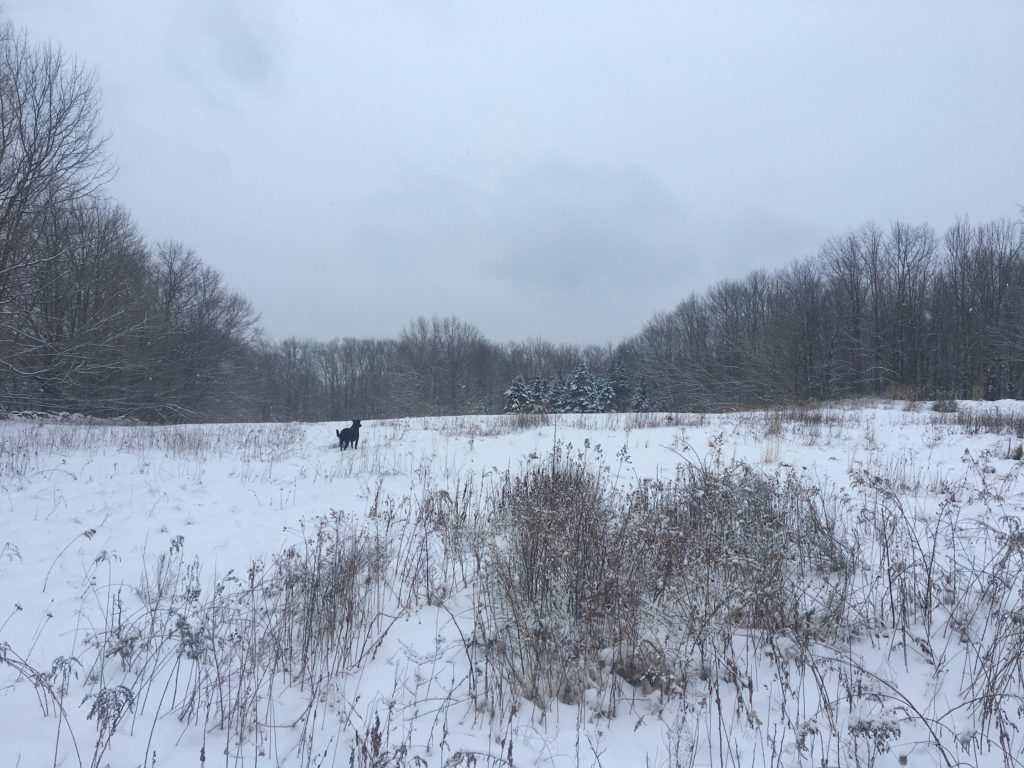 A high of 26F with thick layer of overnight snow balanced perfectly on every branch, nook and cranny. Another flurry of snow mid-morning but clear for the rest of the day. 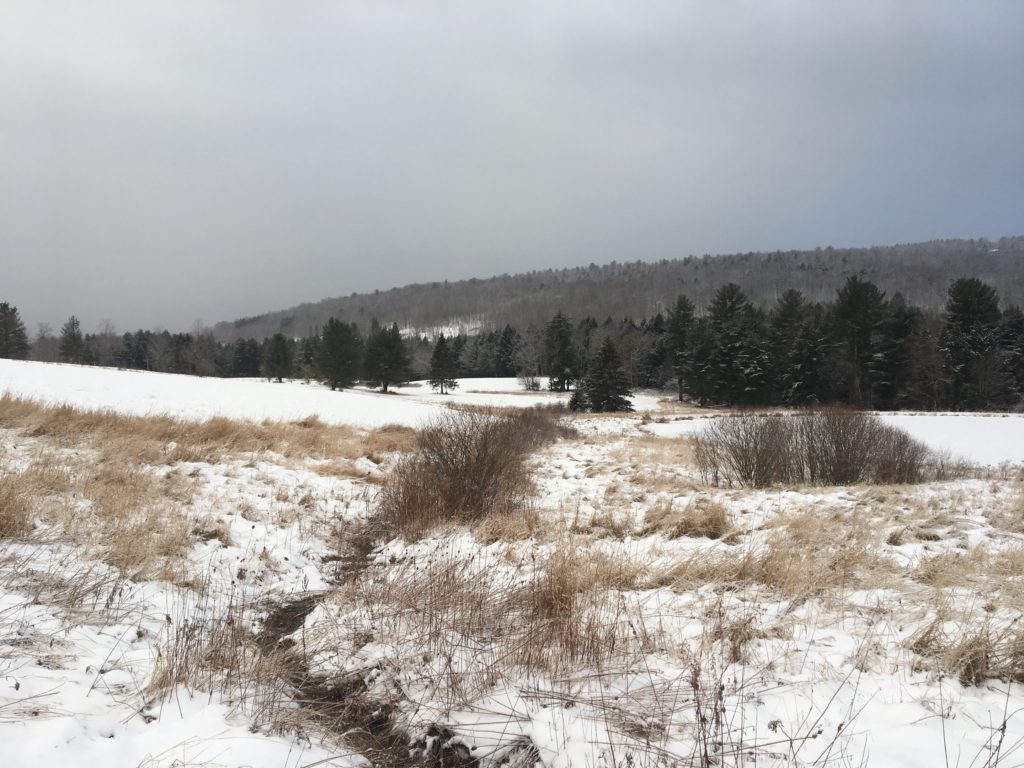 A high of 32F seems remarkably warm, with the peaks enveloped in thick clouds of swirling snow. High winds. 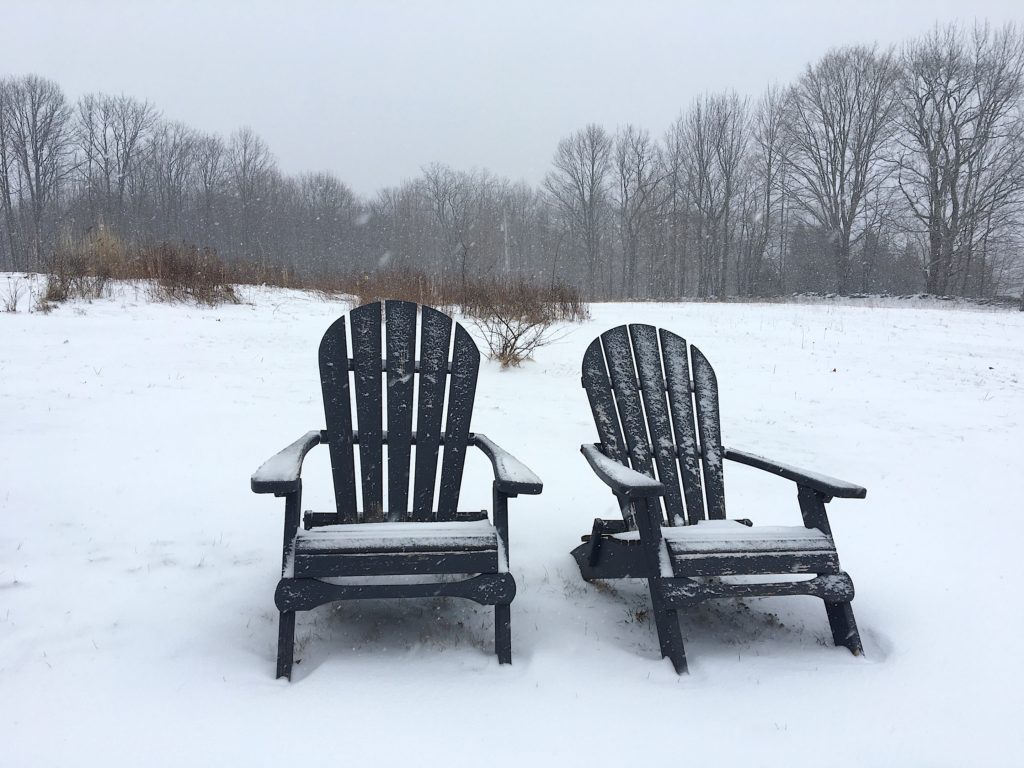 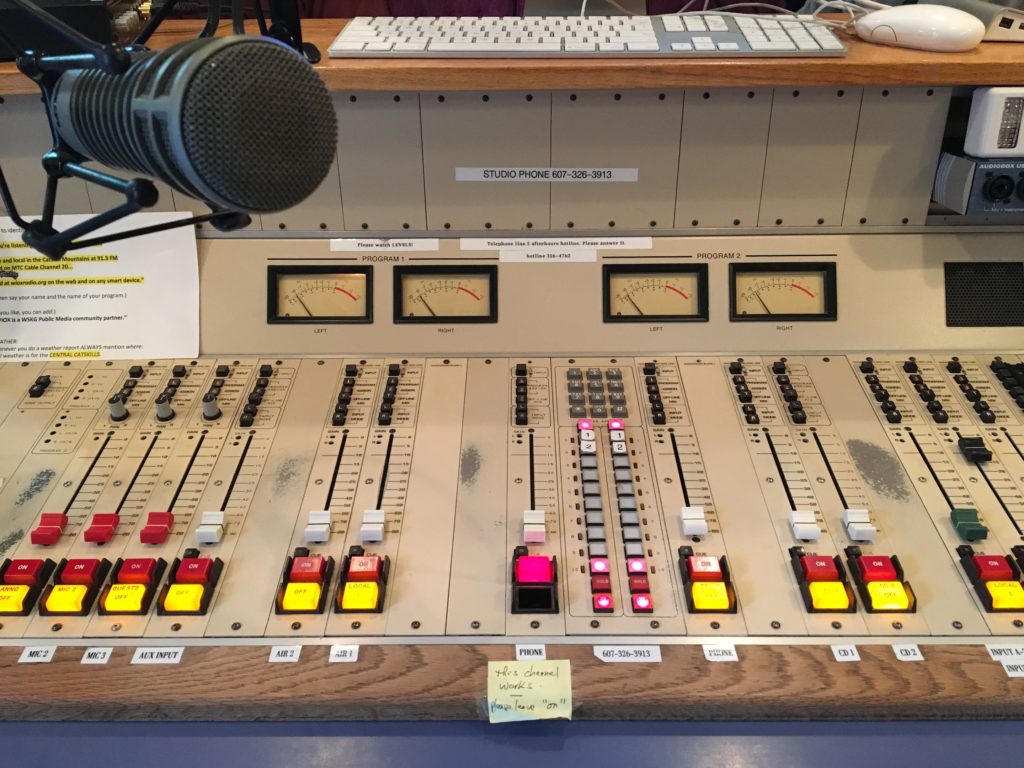 Two separate subjects will be discussed on Monday’s radio show; two that don’t go together at all, except in much warmer weather: burlesque and the outdoors, namely hunting and fishing.

Last year, Brett Rollins, aka Neil O’Fortune, put on a burlesque show at Union Grove Distillery in Arkville that was extremely well-received and very popular with a large crowd. Brett says that he’s had so much warm and positive feedback on the event that he’s putting on another one on in February.

Burlesque has a 100-odd-year history dating back to the musical halls of Victorian England and is mostly irreverent slapstick with music and comedy skits. It came to America around that time, but it’s popularity waned in the mid-twentieth century. It’s most recent revival, called neo-burlesque, has been popular in New York City since about 2001 and, having reported on it for national publications, I’ve witnessed it being remarkably popular with the ladies. It’s a favorite with large groups of women for bachelorette nights and girls’ nights. The art raises the matter of body image for women. Women have been fed the importance of being skinny by the media for so long that we all think that there’s something wrong with our bodies, but in actual fact, we should celebrate our natural form. Fashion magazines are for fashion and not a guide in how a woman’s body should look and its time we stopped torturing ourselves. Diseases like anorexia and bulimia have never been more prevalent. Burlesque acts feature women of all shapes and sizes in fantastically elaborate costumes – a celebration of the female form. Listen in on WIOX on Monday to hear me discuss this with Brett, and Fifi Dupree joining us on the phone, from 9am to 9.30am.

In the second half of the show, from 9.30am to 10am, we’ll be discussing outdoor pursuits fishing and hunting with Ryan Fifield of Fifield Outfitters. How to get the correct permits, NYS rules and regulations and the services that Fifield Outfitters offer.

A high of 24F, with bright sunshine and mostly clear skies. 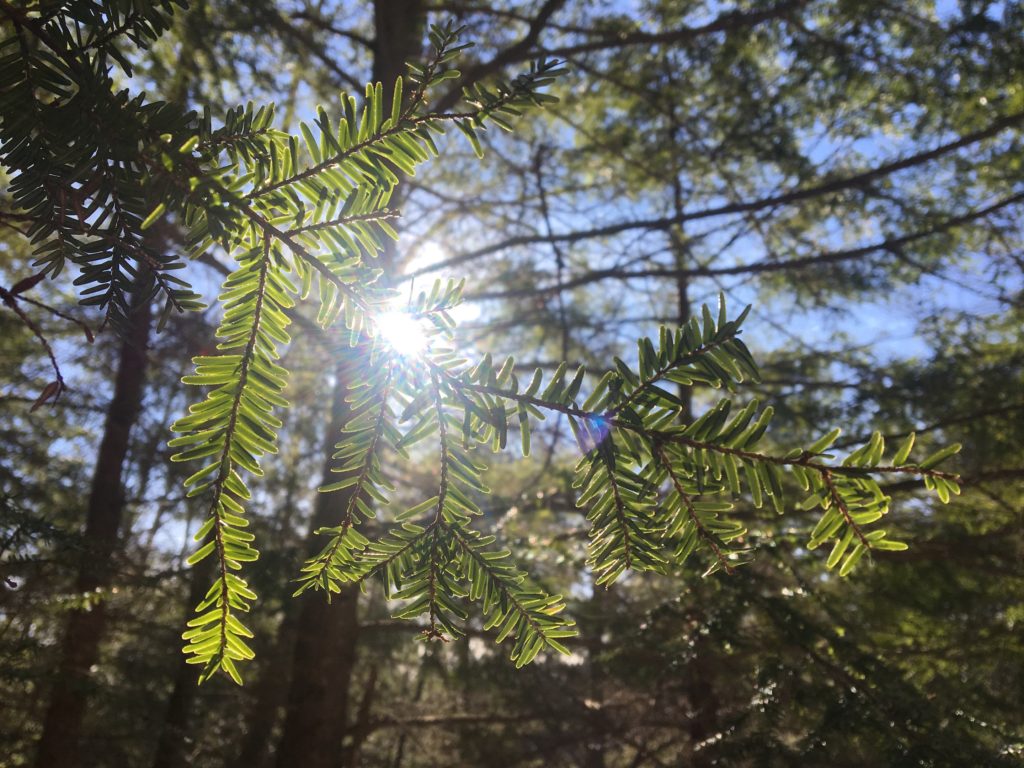 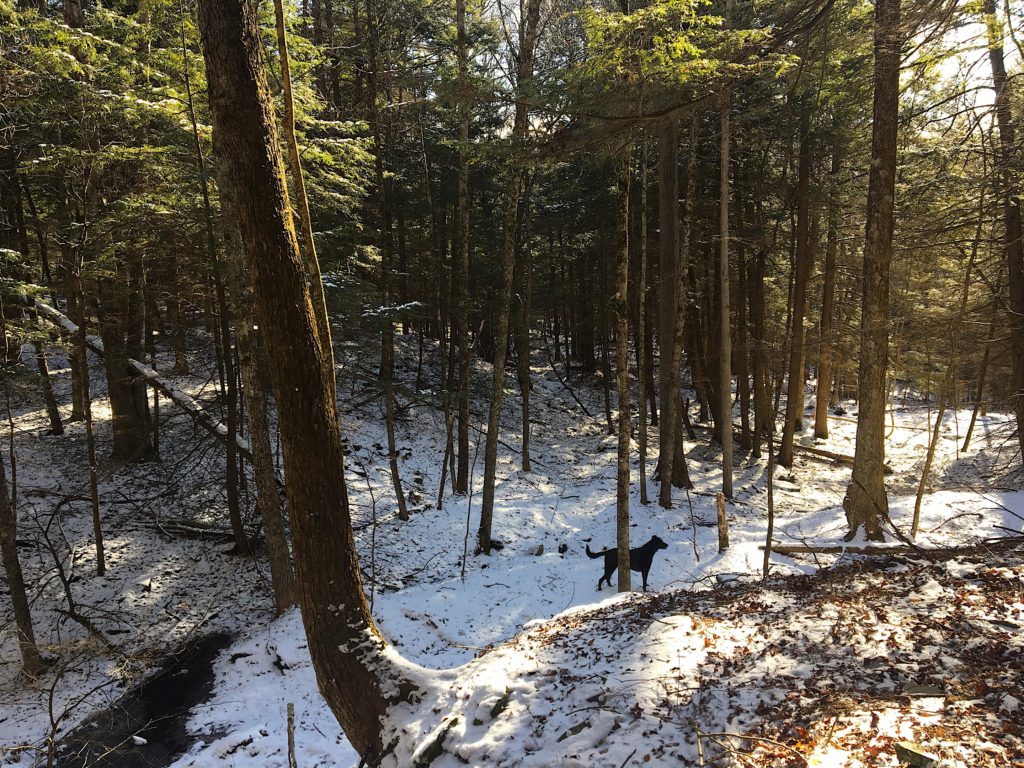 An 18F high, with overnight snow and gusty winds kicking up small snow tornadoes.  A winter wonderland with brief intervals of sunshine. 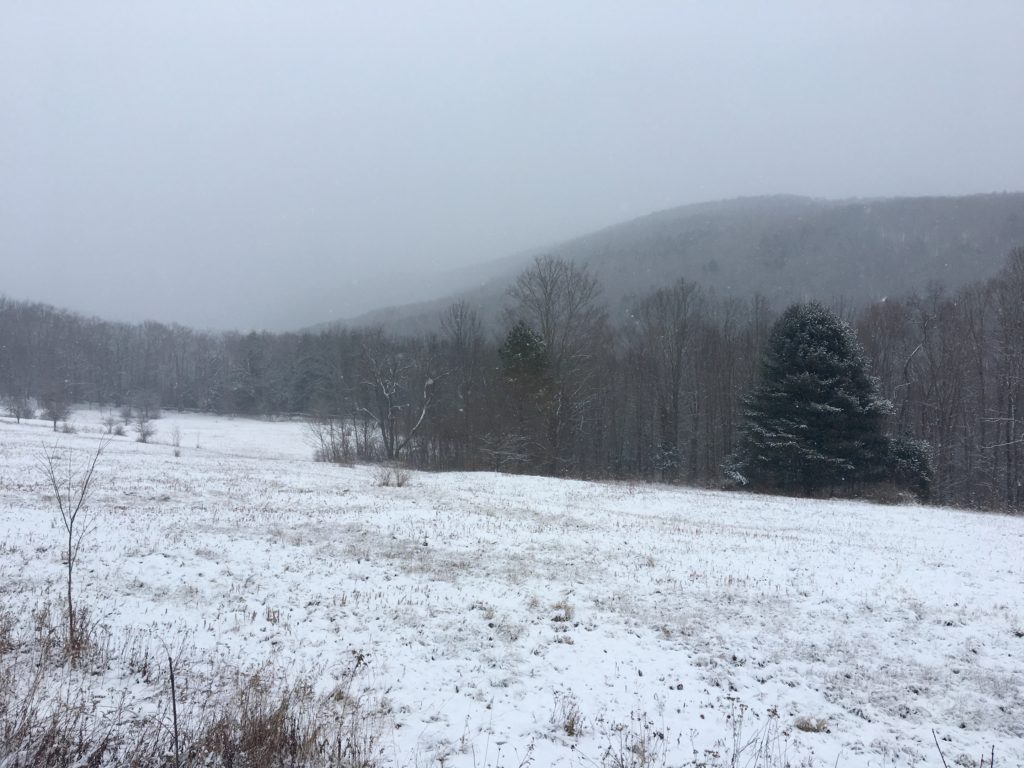 A high of 39F, humid and overcast. A gloomy start to the month. 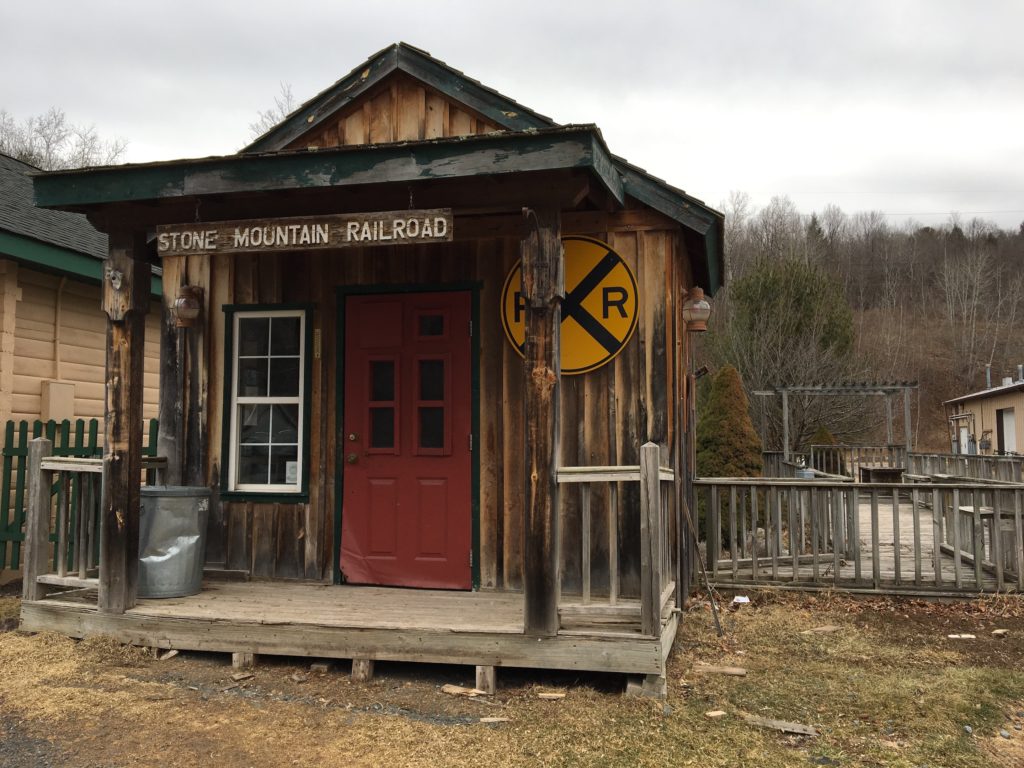 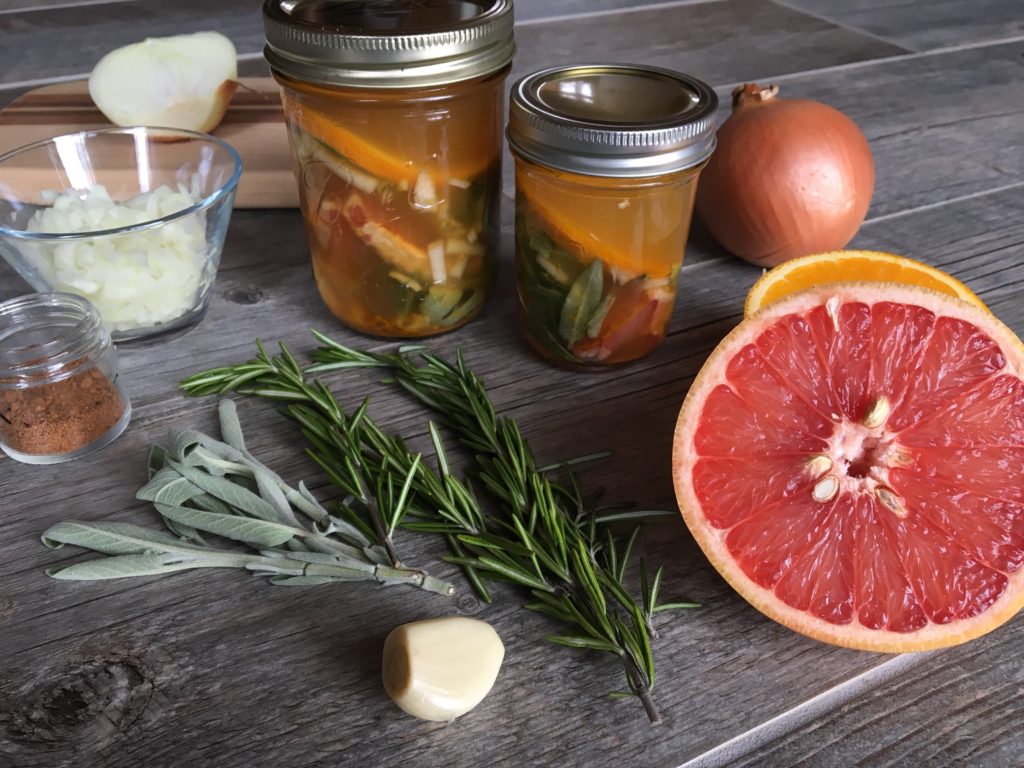 Fire cider is a traditional, ancient folk remedy and winter tonic in which curative roots, herbs and spices are steeped in apple cider vinegar. The basic ingredients of fire cider are garlic, horseradish root, jalapeños, habaneros, ginger and onion. Chop these ingredients finely, put them in a mason jar and cover with apple cider vinegar. To this mix you can add extras like grapefruit, rosemary, garlic, turmeric, ginger, cinnamon, nutmeg, cayenne pepper or really anything that takes your fancy, usually a root or herbs because they steep better than powders.  END_OF_DOCUMENT_TOKEN_TO_BE_REPLACED