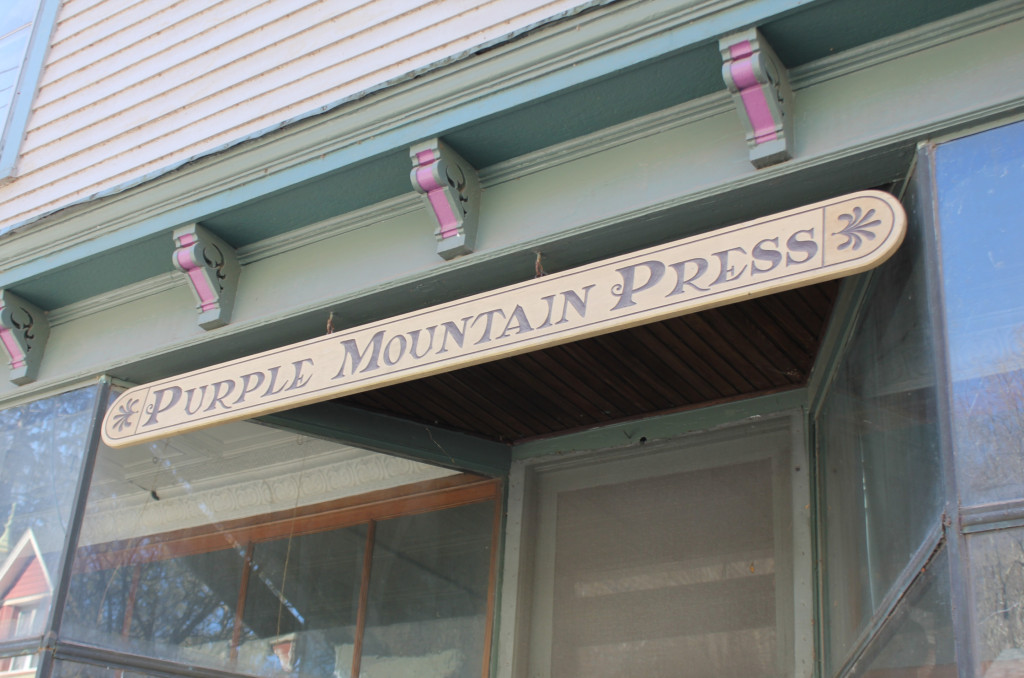 Purple Mountain Press in Fleischmanns, New York publishes hugely popular books of local New York State literature and history including John Burroughs’ book of essays In The Catskills. The office is a smaller structure adjacent to the building that houses the press on Main Street in Fleischmanns. I sat down with publisher Wray Rominger, who is now semi-retired, about the storied publishing house’s achievements and the life of a printer.

We lived in a school bus and came to Woodstock.

Where did you live in a school bus?

We came from Austin Texas, where I was a graduate student from Austin University. We were on the road for two months and I knew a fella in Woodstock that offered us a cabin. He didn’t tell me that the former tenant had had a fire and that there was a hole in the roof. So we had to live in the school bus for another four months until the roof was repaired.

That must have been fun.

Yeah, but right away I got a job on the Woodstock Times. I did a feature a week and laid out the newspaper and sold advertising. It was advertising that brought us to Fleischmanns, because the movie theatre was late with their ad and somebody had to go and pick it up to make the weekly edition and we came up here and fell in love with the village. My wife is German and at that time, summer business here was largely Jewish, Austrian refugees and it was very different than it is now.

Well, when the hotels and motels let out after supper, the street was full of people taking their evening stroll. They were a nice bunch of people, fun loving. They were mostly elderly and their main thing was card playing and drinking coffee and taking evening strolls.

We gradually worked our way into a printing business. A lot of our customers were people I had solicited advertising for the newspaper from, so I had kind of a head start with marketing having known all the restaurant owners and so forth. Gradually over time, we acquired used printing equipment. Then along came the national bicentennial and every little town wanted to have their history printed. There was a huge demand. At that time, the bank here was owned by a Hungarian, Nicolas Diek who had one or two banks and foreign exchanges all over the place, in airports. He would come in once a month to the director’s meetings. He came in one day and seemed to like our operation and asked if we needed anything. I said, “well, Mr Diek, I really need a larger press”. And he said, “well, how much does a press cost”? I told him it would be around $10,000. He said, “well, go and see the banker tomorrow and he will give you the loan”. So, we got the press and three weeks later, we got an order from Diek & Company for $10,000 worth of printing.

So we were off, then, and running and that was in the big building next door. Actually, we really did dream of publishing and it took us until 1985 to get out our first book, which was called The Last of the Handmade Dams: The Story of the Ashokan Reservoir. That book became an instant bestseller. We sold 500 copies in the first couple of weeks and another thousand copies in the first month. I thought: “why isn’t everybody doing this”? That didn’t repeat itself for another 12 years until we published something on the islands of Lake George. We sold 2,000 copies of that in a month there and that book went on to sell 10,000 copies. You never know. I have a good friend who’s a very successful publisher in New York City and he told me that you really don’t know how a book is going to sell. You use your experience in how you rate the potential of a book. We’ve had books that we thought would have limited appeal that have flown out of here. One of them was The Great Hudson River Brick Industry. At one time, the Hudson Valley was the largest brick-making hub in the world. That book went through three printings and will probably be printed again.

I would love to read that book.

We don’t have any copies left.

I might just give you my credit card and just walk out of here with three boxes of books. What’s your favorite book that you’ve published?

My favorite book was a booklet, that was simply called The Mohicans and it was a children’s book. I really enjoyed that book the most. The Mohican Indians lived in the Upper Hudson and Lower Champlain valleys from the southern end of Lake Champlain down as far as Catskill and Red Hook. They were the ones whom Henry Hudson met first in 1609. They were very warmly greeting him. Anyway, Syracuse University Press publishes a lot of books about the Iroquois Nations who were west of the Mohicans. Another university press had published books about the Delaware Indians who were south of the Mohicans, but the Mohicans had fallen through the cracks. We’ve now published about four books on the Mohicans and every one of them has sold well because we don’t have any competition.

What made you go into printing?

Well, working at the newspaper, I learned layout for offset printing. I sometimes had to go to Wappingers Falls, to pick up the paper because that’s where it was printed and I got close to paper printing. It just seemed like I fell into it. I kept our presses until about 1993. We started publishing seriously in 1985. We stopped printing in 1988, but I kept the presses for our catalogs and promotional material.

What did you used to write for the Woodstock Times?

My background is in Studio Art and Art History, so I used to cover the gallery openings there. I used to do human interest features, but Tuesday nights we stayed up all night laying out the newspaper because it was all done photo-mechanically.

I just love the mountains. And we’ve found friendly people here. We even feel closer to the mountains now that we live on this high ridge.

What have you been publishing lately?

Right now, we’re working on one of our best-received books and that was a history of New York City’s water system called Liquid Assets. We published it 13 years ago and sold out of the hard cover edition and two paperback editions, but a lot has happened in the watershed since then and so the author has added a new chapter at around 36 pages. Now, it’s going to be done digitally, so we’re going to have color pictures. So that’s going to be called Liquid Assets Expanded Edition. We expected the text back from the copy editor within the week.

If you retire, who will take over?

I’ve had several people interested in buying. One person is still interested. So we’ll see. Coming up in the spring we have a new edition of our Catskills Geological Guide by Robert Titus. The next edition is co-authored with his wife Johanna. Robert has a column in the Kaatskill Life every quarter. Some of our most successful books are books like Bob Titus’ and he does a lot of lecturing. He’s a dynamite lecturer and he just makes the geology come alive. So he sells the book himself, which is great.

You know, the bookstores, they’re gone. Fifteen years ago, I knew every bookseller from Westchester County to the Canadian border by their first name. I had two booksellers in the Champlain Valley who would give me a kiss when I came with my new list because they knew that our books sold so well.

We started out in the Catskills and Hudson Valley, then in 1990, a retiring publisher in Westchester, Harbor Hill Books specialized in Westchester County, the Adirondacks and The Champlain Valleys, so that just bracketed what we were doing and, all of a sudden, I got his inventory, which was mostly hard cover reprints and when they sold out I did them in paperback and added new books on Catskills, Adirondacks and Champlain Valleys. I had three customers up there that would take a hundred copies of every new book without even seeing it. To call on those customers was like a vacation for us because we would take the ferry across Lake Champlain. I had customers on the western side of Lake Champlain in Vermont. Almost all of those folks are gone now and it’s been a real blow.

Can anybody visit this shop and buy books?

No, I don’t have time for a retail business. I do festivals like Bovina Farm Day and the Memorial Day here in Fleischmanns. We used to do the Fall Festival at Belleayre Mountain and did well over the year, but that dropped off too much too.

Do you do online sales?

Amazon is our biggest customer and we do still deal with Barnes & Noble and the other bookstores that are left.

As we started to publish books about the Champlain Valley we got into colonial military history and that’s really been a part of our business that’s kept up because there are still historical sites for colonial military: The French and Indian War and the Revolutionary War. We sell those books from Maine down to Maryland, and west to Michigan at historic sites. Our best selling book now nationally is The Annotated and Illustrated Journals of Major Robert Rogers. He was in the French Indian war and studying the way the Indians fought. He wrote a manual on rangering, which is still used today by the army rangers, so I sell quite a few of those books on Amazon. I’m assuming that some of them are going to army rangers. 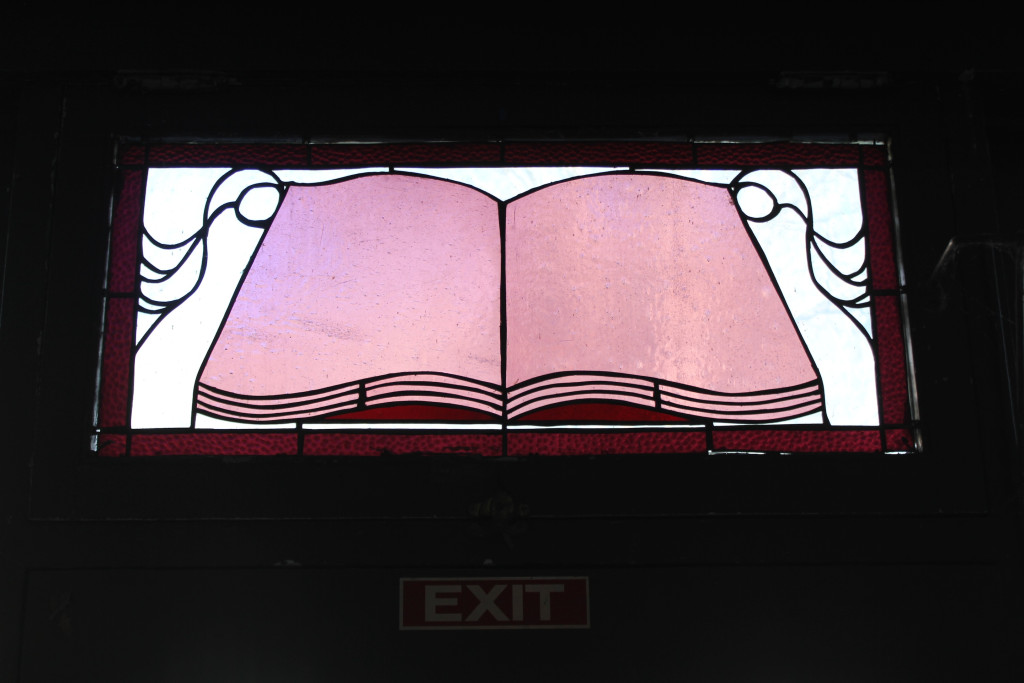 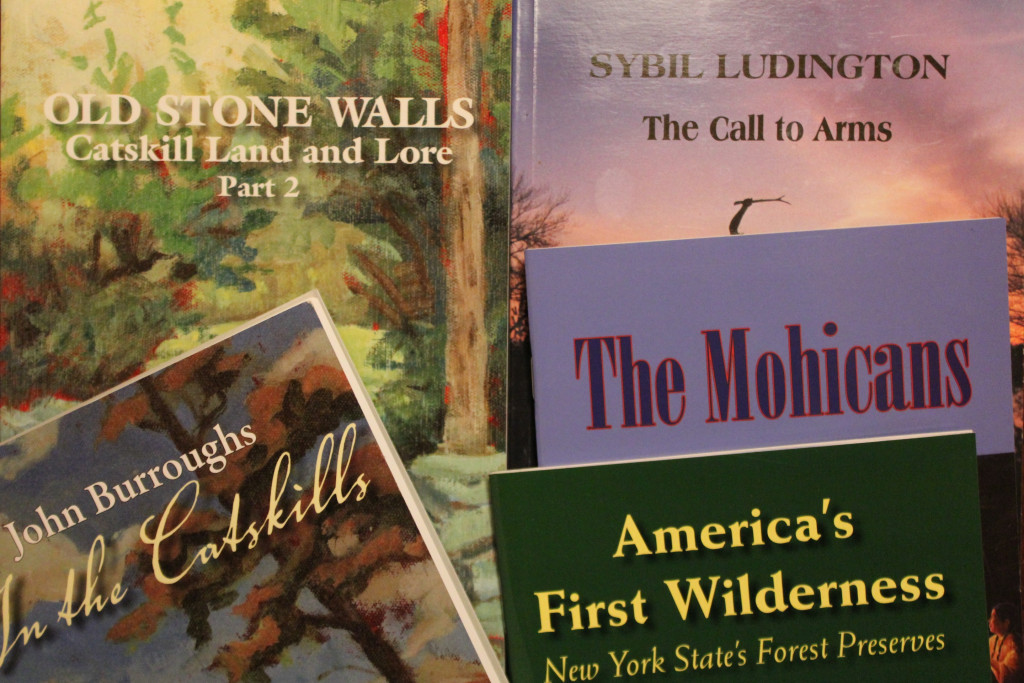