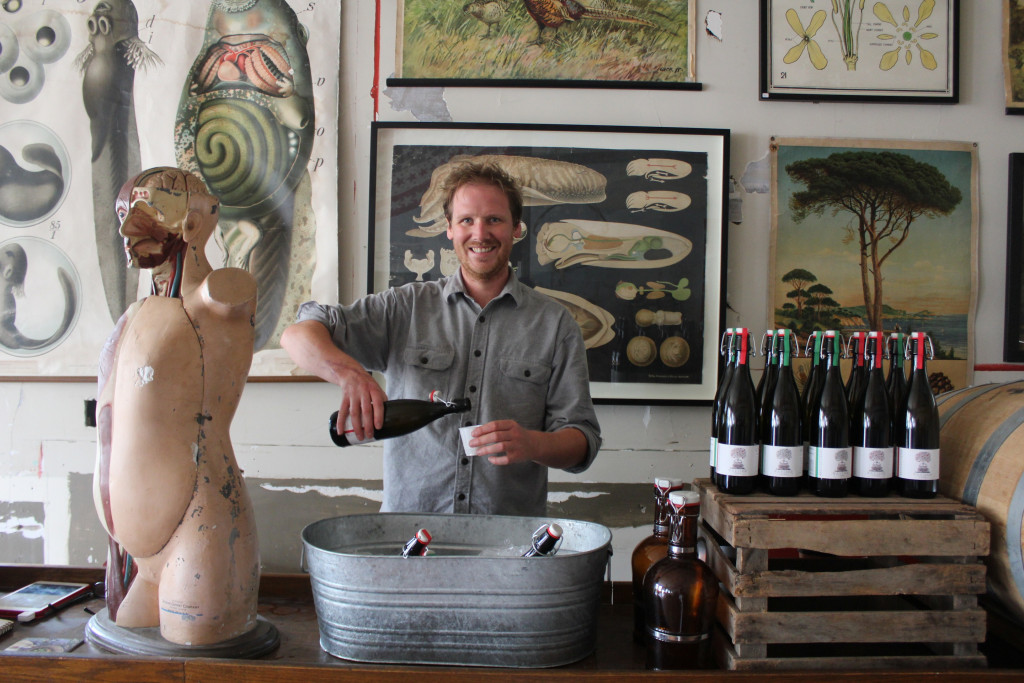 I think we’ve had our house for about six and a half to seven years, right after we got married. Basically, we needed an escape from Manhattan. We started looking around Woodstock and realized that if you went a little bit further you could get a lot more for your money.

What were you doing back in the city?

I was producing and editing film, both documentary and commercial stuff. It’s just that being stuck in an edit room all day, the high pressure, deadlines, late nights: you need an escape from that. My wife’s an attorney so she worked long hours. We got married in a beautiful place in Vermont and we wanted to recreate that beautiful place up here. I grew up in a rural area in England and I’m never happier than when I’m in the countryside. I had to work in New York City, but I didn’t really love it. I was a big fan of London and I quickly learned that I didn’t enjoy New York as much. There wasn’t so much of a social scene with work. In London, your boss would always take you out for a drink on Friday night and you would get to know the people you worked with, but in New York City everyone went home after work. There wasn’t the same camaraderie that I had enjoyed in London and not as much space. It’s slightly more intense and slightly more money-centric. People just live to make money [in NYC] and I think, well what’s the use of money if you can’t enjoy it? Up here, you don’t need very much money but you have everything. Trout fishing, hiking, riding: friends of mine down the road have horses and I go and exercise them. I absolutely adore it.

I had a pretty serious traffic accident and I couldn’t really edit for about a year and a half because my hand was completely out of action. That gave me pause for thought in terms of what I really want to do, my love for this area and the potential in this area.

What made you move from London to NYC?

My wife: we met on a narrative film-editing course. In London, I was in the commercial world and I wanted to get into the documentary filmmaking and she was taking a sabbatical from law. We were long distance for a while and then we realized that we wanted to be with each other and the only real option if she wanted to continue doing law was for me to come here [NYC]. She would have had to retrain in England and had to have taken the bar exams again, whereas I had contacts in NYC so I could work out here.

But now you have an enormous farm.

The farm is actually my business partner Irene’s farm. We have a decent amount of acreage, but the farm is their farm and that’s where the cider press is.

So you have a house?

We bought about 25 acres. It has a beautiful pond, a stream running through it, views and a really simple cabin on it. We wanted something simple because we don’t want to be spending all our time renovating an old Victorian or something. It’s exactly what we wanted.

Where did you get the idea for cider?

Growing up our parents would take us to historical sites and then amazing creameries and wineries. We would be allowed to try anything. Both what it does for community, as in allowing rural communities to survive, but also the difference in flavor you have with these small, regional foods compared to what you get in the supermarket is unbelievable. Actually, the experience of going to these places [in Europe] was a really fond memory of mine and I wanted to recreate that, if I’m honest. Those beautiful memories of being a child sitting under apple trees in Somerset or drinking this completely one-off cider in Normandy or in a beautiful vineyard in the hills up in the North of Italy, you know. It’s that pride in something that’s unique and completely local.

How long have you known your business partner?

About three years and it was really just by luck. I’ve been making cider up here almost as long as I’ve been up here, just for myself. We had an amateur cider contest at Table on Ten. Irene won it and I came second. A friend told us that we should do it professionally. Irene is the head cider maker and I’m the head sales and marketing guy. Not that I’m not making the cider too; I am, because it’s a small team. And I think, right from the beginning of our business, Irene and I both said it had to be fun.

So your business partner has had the orchard for many years?

Yes, on their land there are a couple of really old orchards. They raise these old English heritage variety pigs that get all the spent apples, so it has a fairly low impact environmentally. The biggest thing we have is just the bottles. They are not that environmentally sound because of the glass and the construction method, but they are made in America. So apart from that, there’s next to no waste and the cider press is run on water.

It never gets old. Even if you’ve had a really hard day, you drive home and see the light coming through the mist and think that this is the most beautiful place on earth and feel so lucky. The word freedom is bandied around a lot to the extent that it doesn’t really mean anything, but that’s the best word I can think of when it comes to the Catskills in terms of just being able to walk, fish or ride. Those things are accessible in a way that they’re not in many other places and money still is not the most important thing, you know? If you’re good to your neighbors, they will help you out and vice versa. The people on the whole here are really good and they have been so welcoming and amazing to me as a foreigner.

Yes, me too. So I’ve got a philosophical question: what is work?

It would be interesting to know where that word came from.

Yes, that’s all you need to know really isn’t it?

I wonder if it was sort of post-industrial revolution. I don’t think the Native Americans had a notion of work. I suspect the early settlers here really didn’t have a notion of work as much as “we need to collect enough apples so that we have cider to drink throughout the winter”. I don’t really see what we do as work.

Do you ever have any time off?

Yes. I’m taking a week off to go on holiday with my wife and we make sure we swim pretty much every day. If I can’t swim, I’ll go for a walk at the end of the day even if it’s in the dark. Your own business is almost like a 7-day thing. There’s not a time when you don’t have an email to answer, but it’s fun. Every time I’m on a walk, I find things that I think might go in the cider like a Juneberry or a sugar snap flower. If we infused that in the cider, what would it do?

What plans for the future do you have in terms of farming and producing?

We are hoping to buy some land for the business; [develop] our own root-stock and interesting new varieties; come up with a Catskills native root-stock; experiment with permaculture, so that each orchard is in a different micro-climate, see how that affects the cider. Maybe at some point, we could try honey in our cider from a local source, or put bees in the same fields as the apples for an apple blossom honey mixed with our own cider. It would be cool if we had a taproom that people could enjoy and sit in our orchard. A place where people can come and be inspired, I hope.