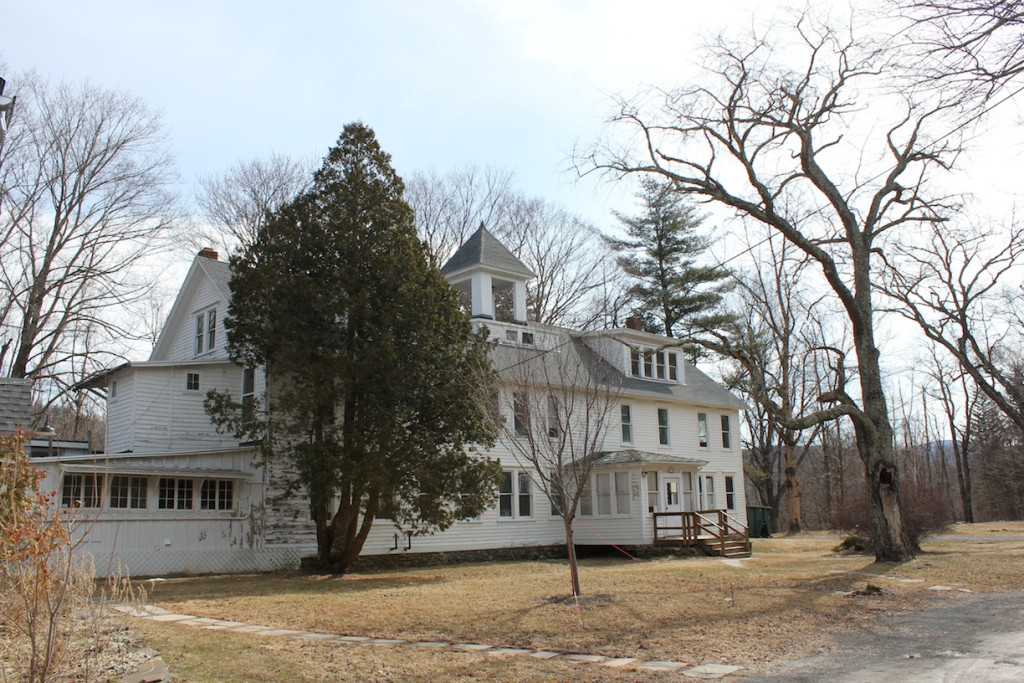 Up the hill behind the train tracks of the DURR opposite The Emerson, a new inn is being fitted out with ten rooms, restaurant, bar and lounge named The Foxfire Mountain House. Most of the furnishings are second-hand items found in the Catskills, with the decorative Moroccan tiling found in a warehouse in Brooklyn. There are still chairs to be sanded, beds to be built and raspberry banquets to be fitted, but proprietor Tim Trojan hopes to be open by June. An adjacent cottage has been ready for a while and has been rented for weekends on AirBNB. Tim owns the inn with his wife Eliza Clark a television producer and Eliza’s daughter Arden Wray, a photographer. He’s been directing the renovation for the past year, but the style has come from his wife Eliza who produced renovation television shows. 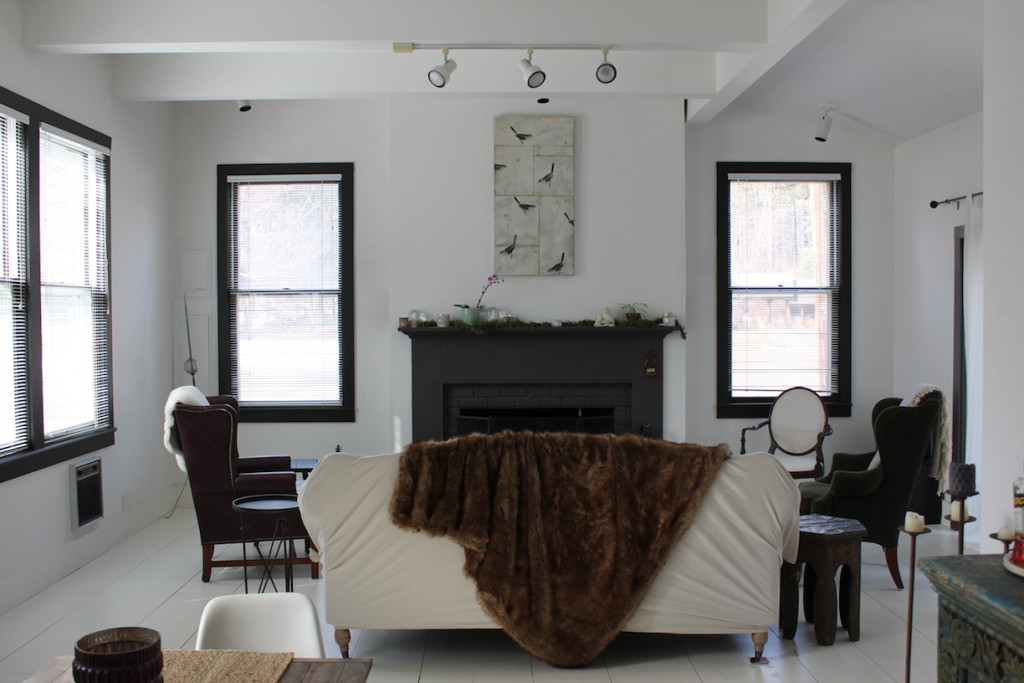 © J.N. Urbanski The main room of the finished cottage

The property was built in about 1885 and has always been some sort of an inn having been owned respectively by the Longyears, Evers and Brewster families for the last 130 years. There’s a fifty-stone cemetery on the property through a stand of pine.

The colors and light of the parlour floor restaurant are warm and uplifting with tones of peach, green and whitewashed hemlock. The set concrete bar is the restaurant’s cornerstone: it’s so heavy that it’s actually fixed into the ground underneath the inn and does not rest on the dining room floor at all. The Moroccan tile, which makes guest appearances throughout, is a striking accent. It’s on the facing side of each stair on the hallway staircase; on the kitchen floor, in the dining room and out on the veranda.

On the grounds, further up the hill, there is a lake, a gazebo and an abandoned kidney-shaped swimming pool that has been filled in and turned into a pond. Rather than buy everything new, the proprietors have taken their time to seek materials much more cheaply. Reclaimed windows dot the dining room.

Tim sees the finished result as “kind of a worldly style, where we’re making it seem like it’s your eccentric, rich uncle who had the place and has been here forever”. He’s been in the restaurant business all his life, since he was 14 years old and has been taking copious notes. His staff will be full-time employees and earn a decent, living wage “that you can take to the bank” obviating tips. As he explains, your tips aren’t counted as income by the bank when you go for loans and mortgages. He wants his future employees to have the chance to be part of the community not slaving away on minimum wage.

He envisages a large portion of his clientele being Brooklynites “exploring the region and making it their own” so he’s keen to keep the prices reasonable. Go here to read their blog. Watch out for details of my radio show on WIOX in which the erudite and enthusiastic Tim will be a guest on Monday April 20th, talking all things hospitality. 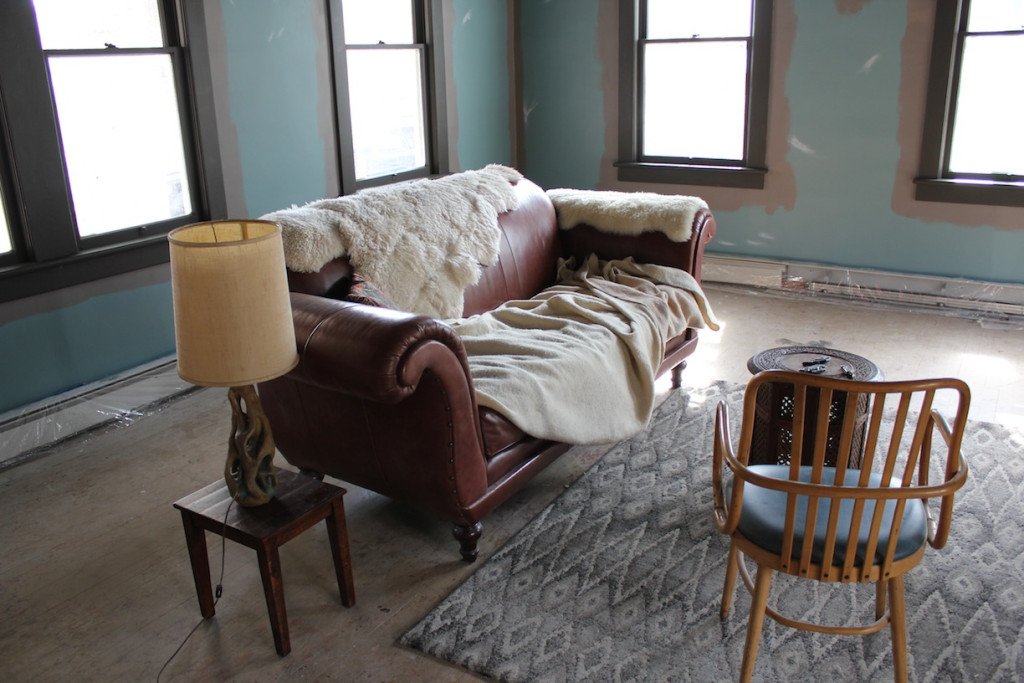 © J.N. Urbanski A cosy lounge in the making. 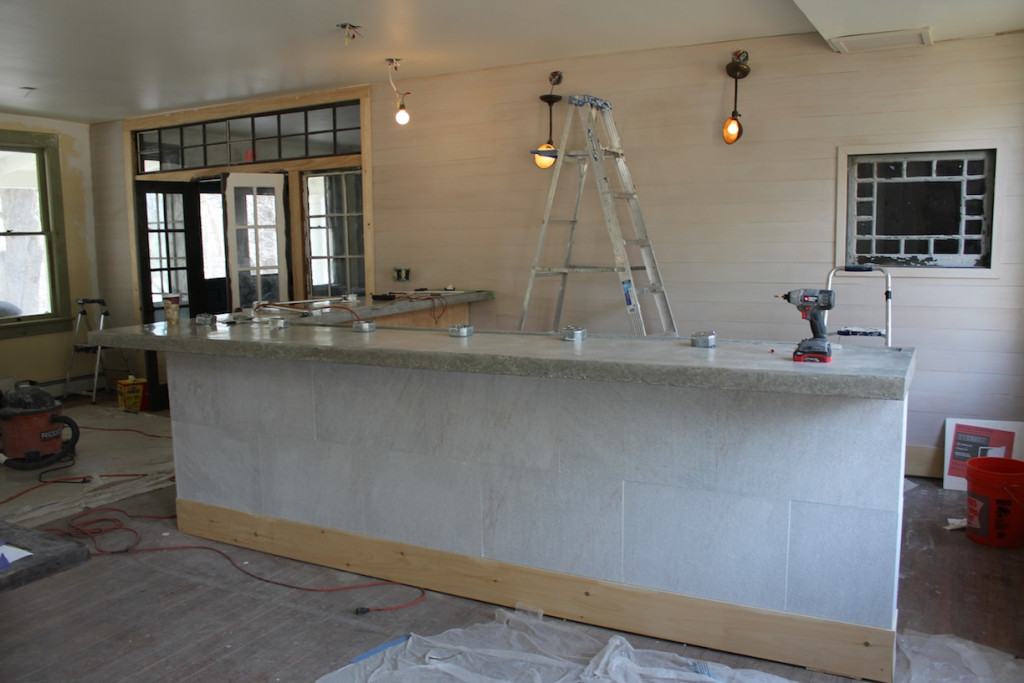