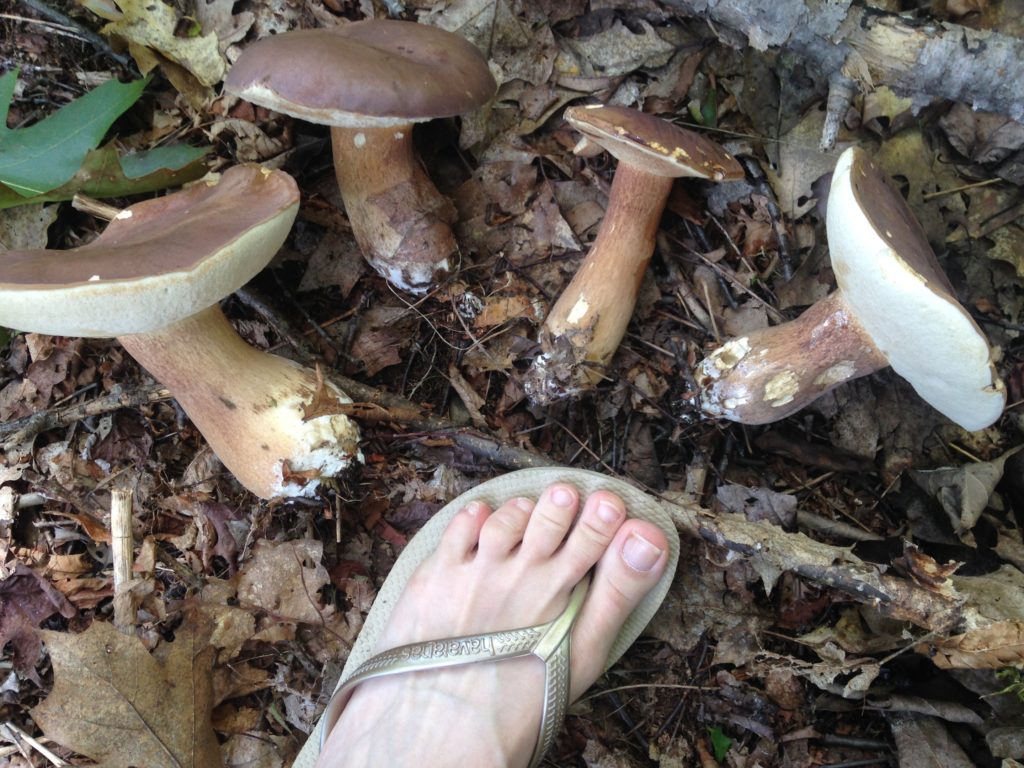 It’s mushroom season and while foraging I found a huge stand of bolete mushrooms growing under maple and oak trees on the edge of my forest. I’m a novice forager, so I had FOUR separate people confirm that what I had was edible. Before proceeding to eat any mushroom, you must first be certain of its identity. Seek the counsel of experts as it’s simply not worth making a mistake in this case. Even as my mushrooms are cooking, I’m still worried about eating them. A couple of neighbors have applauded my courage, so it’s safe to assume I will have what I cook all to myself. I will keep readers posted as to the state of my stomach. Over the next month or so, I will be taking some foraging classes, but in the meantime, I wanted to get started and make the most of what my garden had to offer.

Bolete mushrooms reproduce by dropping their spores out of a multitude of tubes that makes up the spongy underside of the mushroom. These mushrooms have a strong flavor that’s perfect for gravies, soups and curries. If you want to encourage the mushrooms to return, don’t pick them as I did (pictured above). I found out from my expert that I should have cut them at the stems and left the roots behind.

Finally, don’t go foraging in flip-flops. Wear boots, socks and trousers. I found our bolete at the edge of our forest and then spent the rest of the afternoon researching and developing recipes, which you’ll find in the next post.

To prepare these mushrooms, I sliced off both the spongy spore part and the stem and kept the white part to cook. I noticed that the white part of the mushroom smelled fantastic, like a mixture of dirt and forest floor, whereas the spores didn’t smell nice at all. I’ve heard you can also use the stems, but I wasn’t feeling that adventurous so they went in the compost. You’re also supposed to cook these mushrooms as soon as you bring them home as they go off quickly.

Here’s how I prepared them for cooking:

First, turn the mushroom upside down a slice it in half. You will see the difference between the spongy spore section that you will cut off and the white of the mushroom. I wanted to keep only the white part. 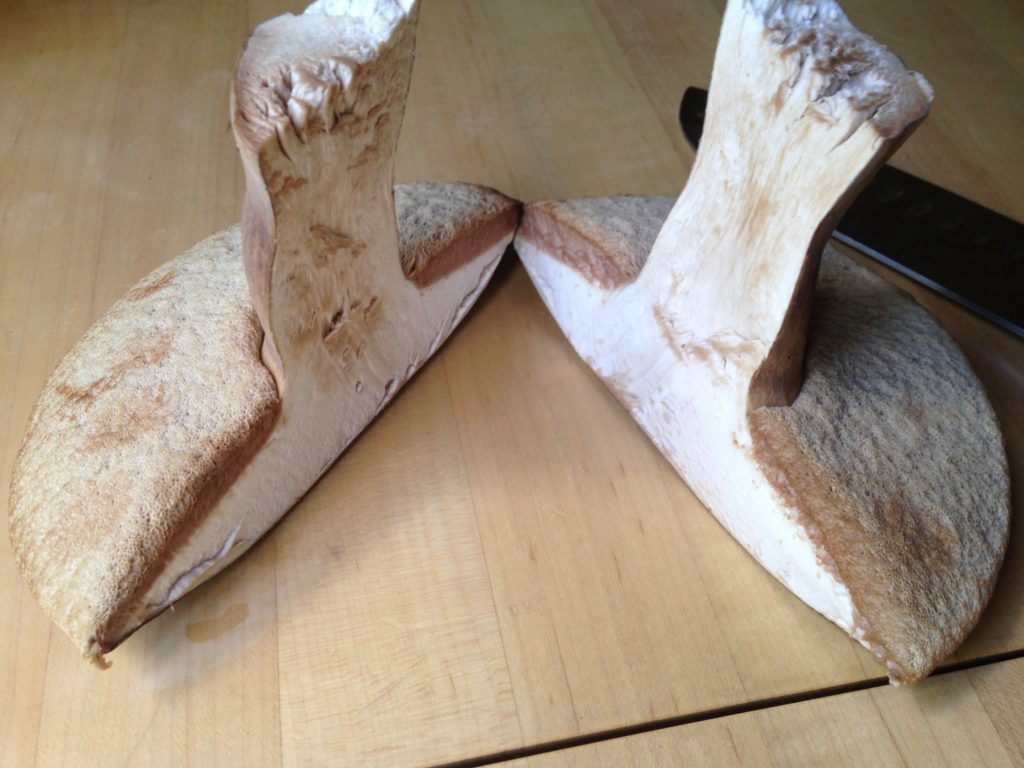 Then, take a knife and slice off the stem and brown layer of spore: 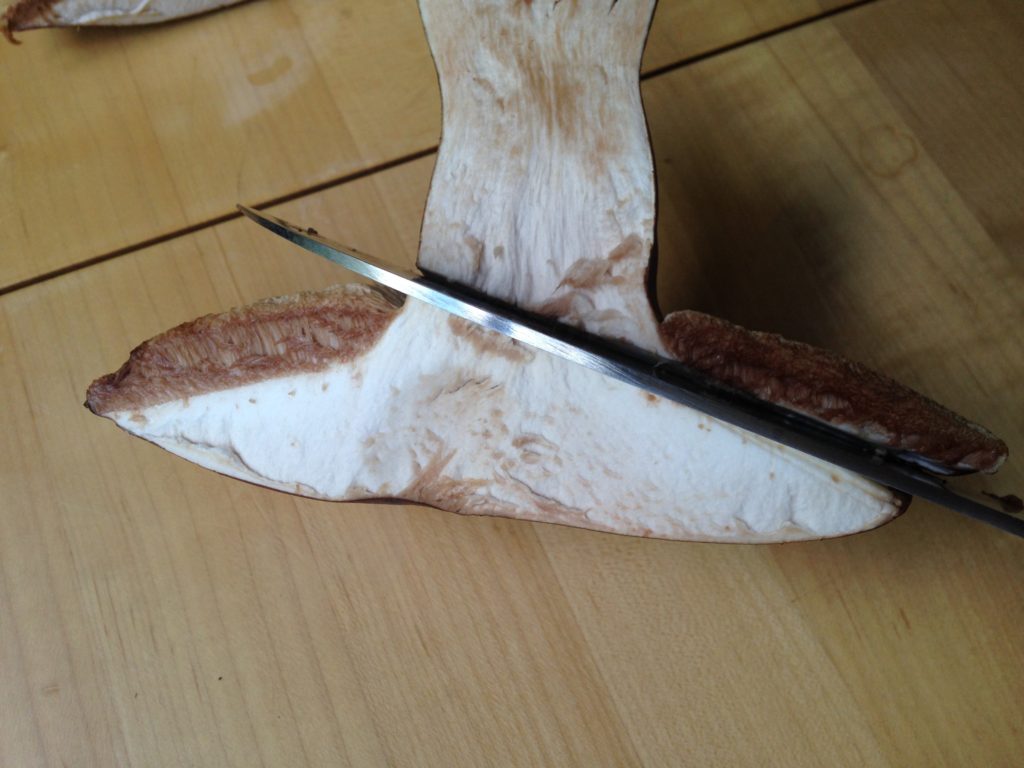 Once you’ve finished you will be left with the white part (at the bottom of the picture). Discard the rest. 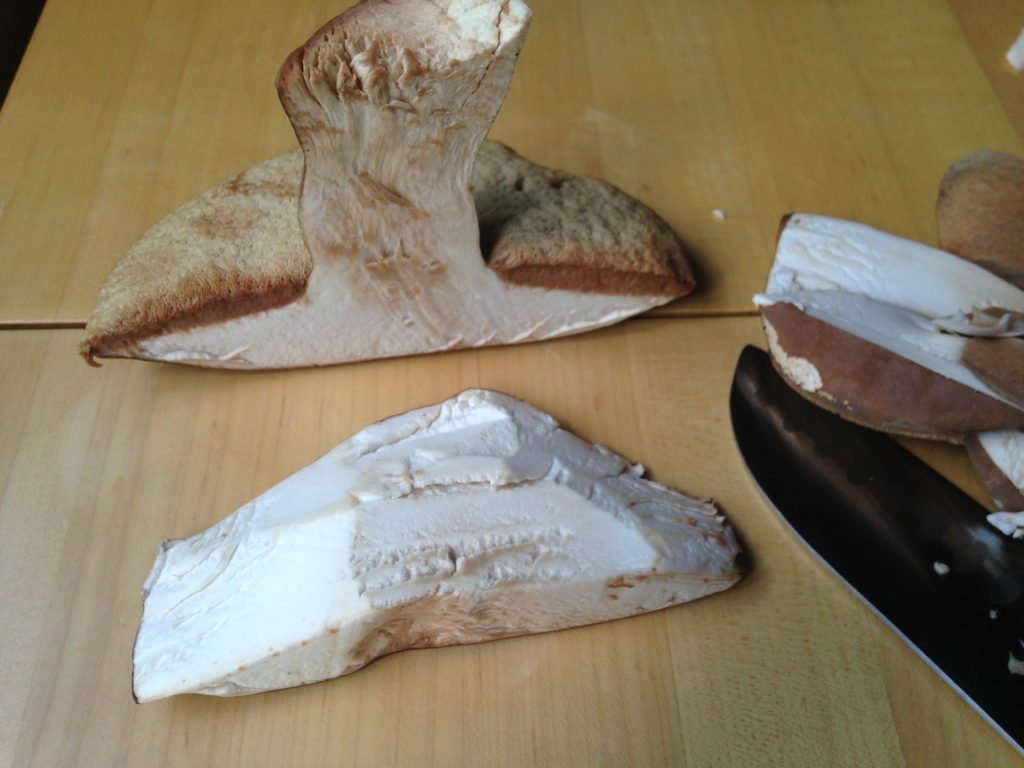