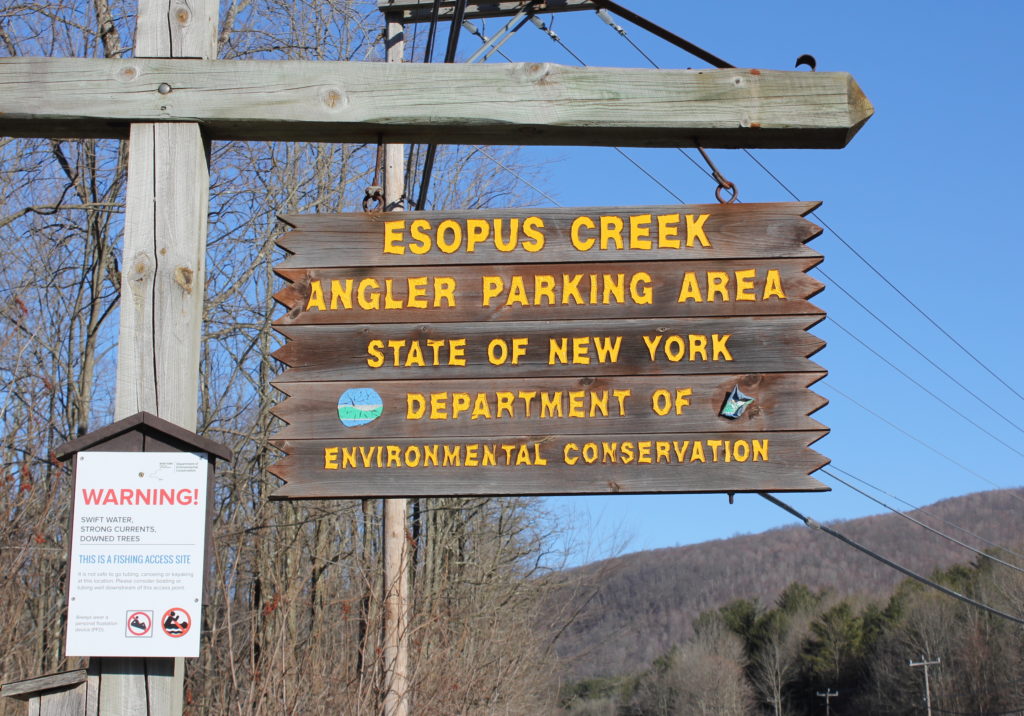 “Indeed, a certain quality of youth is indispensable to the successful angler, a certain unworldliness and readiness to invest yourself in an enterprise that doesn’t pay the current coin. Not only is the angler, like the poet, born and not made, as Walton says, but there is a deal of the poet in him, and he is to be judged no more harshly.” John Burroughs, Speckled Trout

Catskills residents enjoy liberties that they never take for granted: hunting and fishing are permitted here and, for many, these are reliable, cheap and honest ways to feed their family natural food. In the Catskills, fly fishing season begins on April 1st. Fishing permits are available for residents and visitors. A ceremonial casting usually takes place every year at Junction Pool in Roscoe, a body of water formed by the confluence of the Beaverkill and the Willowemoc rivers, where the fish linger a little too long, so the fishing is favorable. Roscoe is known as “Trout Town USA”, the birth place of fly fishing in this country.

The most popular place for Catskills fishing, however, is along the banks of the 65.4-mile Esopus Creek that originates at Winnisook Lake at the base of Slide Mountain, a favorite hiking spot of the local writer and naturalist John Burroughs who died about 100 years ago. Fishermen and women come from far and wide to fish this creek. From Slide, it runs alongside Route 47 to Big Indian, turns in a south-easterly arc and heads south alongside Route 28, until its impounded at the Ashokan Reservoir, so that New York City can have its drinking water, then heads north to the Hudson at Saugerties. There were few anglers spotted on the river today as this year’s gloomy opening morning coincided with the Easter holiday.

You don’t have to use fishing as an excuse to get in the river, though, especially if you’re thinking of practicing catch-and-release fly fishing, where you throw the fish back in the water after you’ve admired it for a few seconds. Along Route 28 and its adjoining roads, there are several access points to the Esopus where you can you can park and dip in a toe, or two, or even wade in and gasp at the spectacular beauty around you, which residents are used to doing. It’s impossible to convey in words or images just how remarkable it is to live in an area of such breathtaking magnificence. Plus, there’s nothing more mesmerizing and ethereal than flowing water. Crouch at the shore of a Catskills’ river; listen to the water babbling, rushing or crashing into froth against natural stone weirs; watch it gliding around smooth rocks like quicksilver, glimmering and twinkling in the sun as it flows downstream; stick your hand in the rapids and wash your cares away or be a boulder for the day. No permit is needed for meditating. 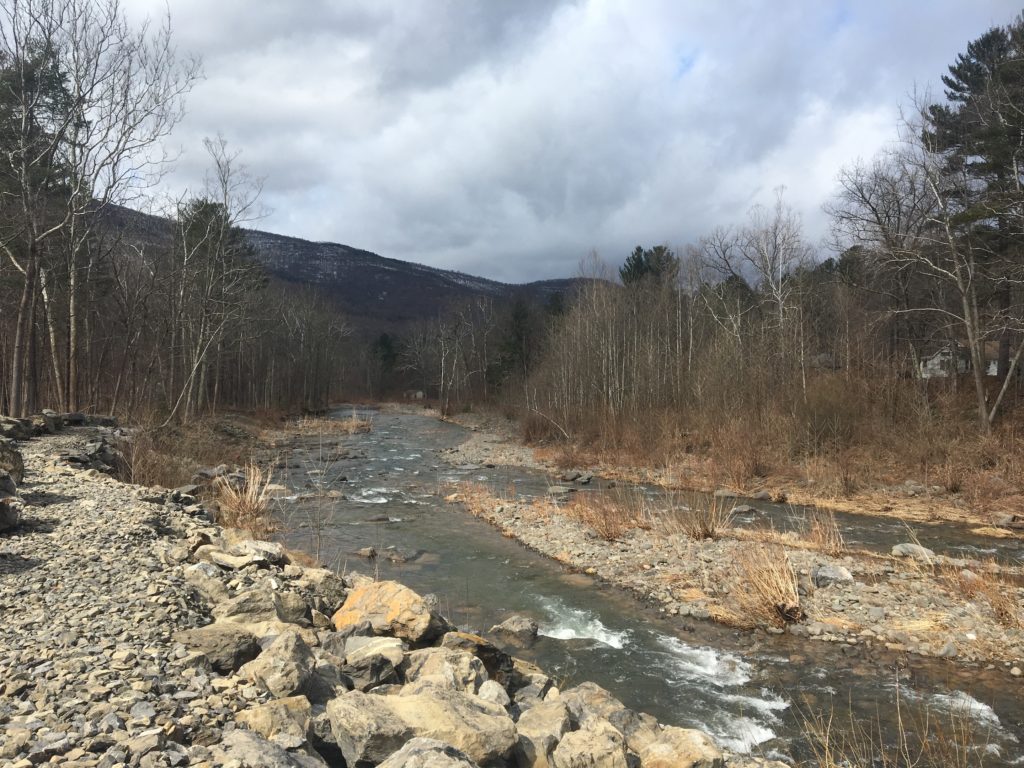 John Burroughs wrote: “when a heated and jaded refugee from the city first sees [the river], he feels as if he would like to turn it into his bosom and let it flow through him a few hours, it suggests such healing freshness and newness. How his roily thoughts would run clear; how the sediment would go downstream”. He implored readers that the next best thing after that would be “to tramp the banks and surrender to its influence”.

Burroughs, a lifelong angler, writes of walking home as a boy having “brought more game than my creel showed”, meaning that he had a stuffed creel – a lidded basket in which one carries fish – and probably more in his pockets.

Trout is delicious, but once you’ve caught your limit, don’t cook it stream-side like Burroughs did unless you’re prepared to eat the entire fish or take the entrails home. Doubtless, bears, coyotes, or a mountain lion would thank you for leaving them behind, but it’s illegal to leave entrails within 100ft of a public waterway.

A permit is needed to fish from April 1st to October or November, depending on area, except on those weeks of the year that the New York State runs a “free fishing” week in February, June, September or November. Daily limits for trout caught in Northern Delaware County and Ulster County are quite generous, with the catch limits for most rivers being 5 trout of at least 9 inches. Daily limits for trout caught in most reservoirs are Pepacton: 2 (to include one over 21 inches), Canonsville, Neversink, Ashokan and Rondout: 3. You may fish in Big Pond and Little Pond all year round, but your catch has to be at least 12 inches.

Read more about fly fishing from Upstate Dispatch here. See you on the Esopus.

“… the great secret was this, that whatever bait you used, worm, grasshopper, grub, or fly, there was one thing you must always put upon your hook, namely, your heart; when you bait your hook with your heart the fish always bite”. John Burroughs, In the Catskills 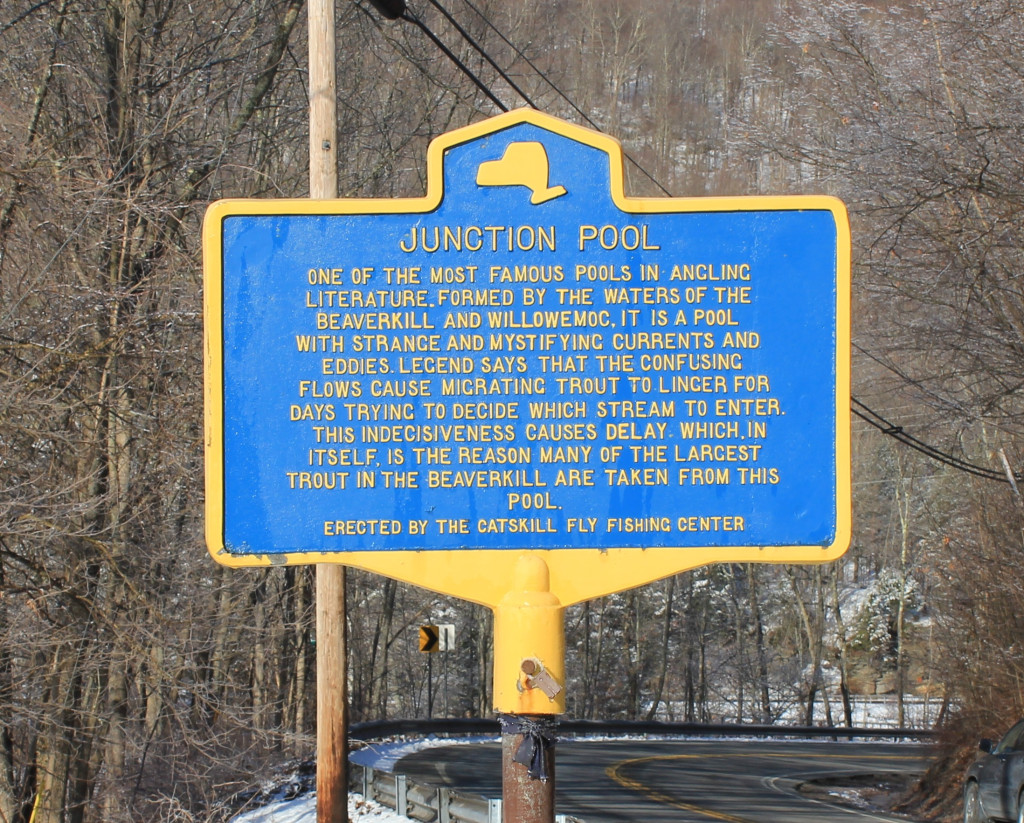 4 thoughts on “Fly Fishing in the Catskills”