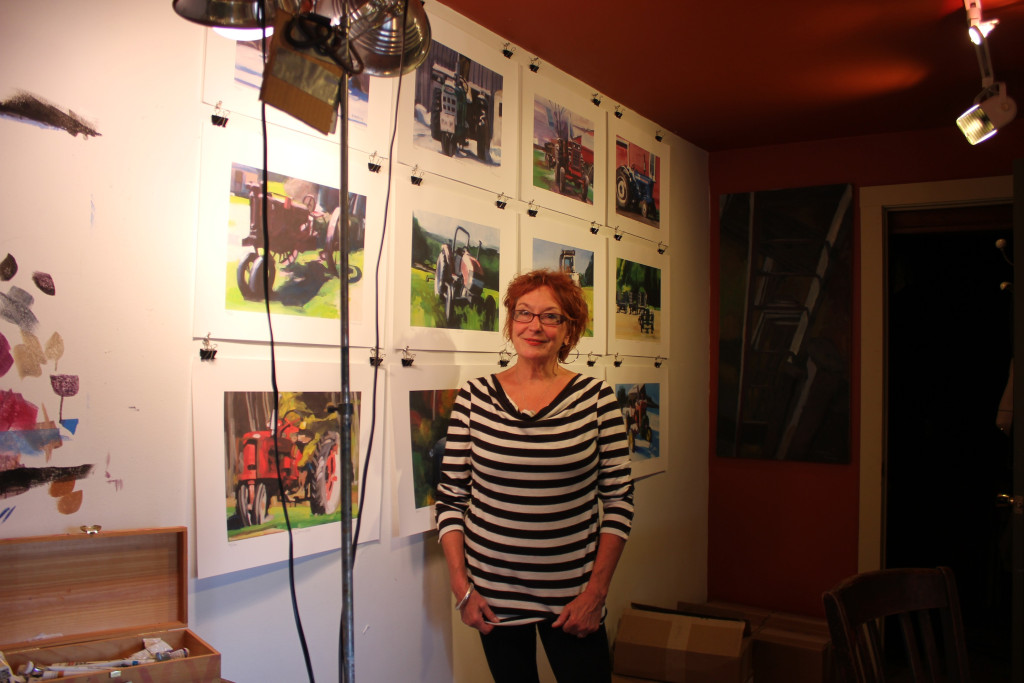 Lisbeth Firmin works out of her warmly inviting art studio in Margaretville, in upstate New York. She was part of the Catskills Open Studio Art Tour last weekend in which she showed many strikingly gorgeous cityscapes in oil.

LF: I moved from New York City in 2000, but I kept my apartment down there, so I went back and forth for a while.

What were you doing in the city?

I was a painter and I had a two-bedroomed apartment on Sullivan Street and I painted in one of the bedrooms. My career was just taking off and I needed a bigger space, so I bought a storefront in Franklin, upstate New York.

That sounds very Williamsburg. I remember, back in the day, artists used to buy storefronts and paint out of them. Those were the days.

Oh man, those days, Williamsburg. You can’t even go anywhere near the city these days. I’ve heard Newark is happening.

Really? You expanded into the Catskills, which is much nicer than Newark. So you’re a painter. Are you a New Yorker?

I lived there in 1979. I left my husband. We got divorced and I took my daughter and we moved to the city because I had a one-person show there called Out of the Blue down on Bond Street in 1977. I decided I would go to New York and it was going to be that easy [laughs] you know what I mean? But it wasn’t. I think it was another ten years until 1989 that I showed anywhere. I was just too busy just trying to pay the rent.

What did you do to pay the rent?

I learned how to do graphic design and I parlayed that into a really nice full-time job, but I was painting a lot this whole time. I had a couple of dealers in the late eighties. And then I decided to paint the city in the early nineties and that’s when my career really took off.

I’m not surprised because you’re a really great painter.

So are you from New York?

I did one year of college at the University of California and then I dropped out. It was a liberal arts college. I didn’t go to art school.

Well, you didn’t need that did you? Why put yourself in debt for something you’re really good at anyway?

What did you do before you moved to New York City?

When I got pregnant, my husband and I moved to Provincetown in 1970. I went there to study. I wanted to study with these two guys from Manhattan called Victor Candell and Leo Manso. My husband was a portrait artist on the street, a really good one, so he made all the money. I had my baby. So we spent our summers in Provincetown and our winters in Puerto Rico.

Actually, it was a lot of work for me because we had to move twice a year. I had a baby and a sheep dog, but it was very bohemian.

You look like you paint a lot on the streets of NYC. Do you set up your easel on the sidewalk and how long does it take you to make a painting?

No, I have done that, but I much prefer to work in my studio, so I work from my photography. I just shoot what I want to paint and bring it back to the studio.

How long does it take to do a painting?

An oil painting takes quite a long time. I call them “passes”, where I work on a painting and I give it a complete pass, like a layer. So it starts off like a very loose dark and light abstract thing and it’s almost like a photograph being developed as I keep working on it. I would say it takes ten to twelve passes. And then there’s a lot of tweaking after that. I like to sit on it for at least a few months and just look at it, you know? Or not look at it and look at it again after a few months. They take about a year. I’m working on four or five at a time. So I’m getting those four of five done within a year, let’s say.

How many have you done in total? I’ve looked at your website and it looks like you’ve just got loads.

Where is your favorite place to be? Where do you feel most settled out of all the places you’ve had a studio?

I loved my studio in my house, but then I broke up with my partner and didn’t want to be up here alone. The winters are really long. Then I met this really wonderful guy and we got married and I’ve never been happier. That’s really been good for my work because I feel very secure and that’s good for me. I don’t really have a lot of worries on that end. I feel very tethered. I can go to my studio, shut the door and just paint full out. So I would say now, I’m feeling pretty settled right now.

How many paintings do you have on the go at the moment?

I’m painting for my show in Provincetown next year and I’ve got three on the go and five more in the works. I’m starting a new painting today.

My subject matter centers around painting the light, especially as it describes the human figure. These days it’s much less about painting the urban environment.

Do you think you might do any Plein Air or Catskills scenes?

I have done that. I’ve painted some Plein Air from Franklin. I just got done teaching a Plein Air painting group up in Provincetown. I don’t really enjoy doing Plein Air. I much prefer to be in my studio in the controlled light.

It’s true. If you take longer than a few hours to do a painting outdoors, the light changes so drastically from moment to moment. So much painting is about looking. And if you’re looking, looking, looking and every time it changes, there’s no point in looking.

I love your paintings by the way. They’re so refreshingly different.

Thanks! What are your favorite artists?

My subjects are alone usually, but I think Hopper captures quintessential loneliness. My people are just alone. It’s different.

Who were your biggest influences growing up?

I could always draw. It was just something I was born with, but I didn’t grow up with art around the house. I just grew up on my own, just being able to draw. That was my thing. I just kept working on that. When I first saw Paul Klee it blew my mind. And then I would walk into these art institutes as a kid to do these figure drawing classes and just being there would make my whole body shiver with joy! I just knew that that’s what I wanted to do. It still happens actually. I walk into an art store and get all shivery. Oh, I want that and that…