Nothing makes you more alert than hiking an unmarked, bushwhack trail to the top of a very steep mountain. It was such a relief, after doing a quick pitstop at Hurricane Ledge (for the picture above), to return to the summit to find fellow hikers. KHP, as it is known, is not for the faint of heart, the inexperienced, or anyone with the slightest bit of vertigo. Map and compass-reading skills are essential for this hike.

Kaaterskill High Peak was once thought to be the highest peak in the Catskills until someone took actual measurements. There are several ways to approach this peak – the southern approach to the summit is the most steep – probably one of the steepest ascents in the Catskills. An easier way to access the peak is from the northern part of the loop of a snow mobile trail that encircles the mountain close to its middle in the flatter part before the steep ascent to the summit. The easiest way to ascend is to approach from the west, but this begins with a bushwhack right out of the gate and a short walk through private property.

The most popular route is from Platte Clove Road, east of the Platte Clove Community, where you can pick up the Long Path and go north on it. About a mile up, there is the connection to the yellow-blazed trail that’s about 1.4 miles to Huckleberry Point with views of the Hudson River. If you take the blue-blazed Long Path for 3.3 miles up a rocky ascent through several whisper-quiet hemlock groves, you will rise into what’s known as Pine Plains where you’re enveloped in pines: 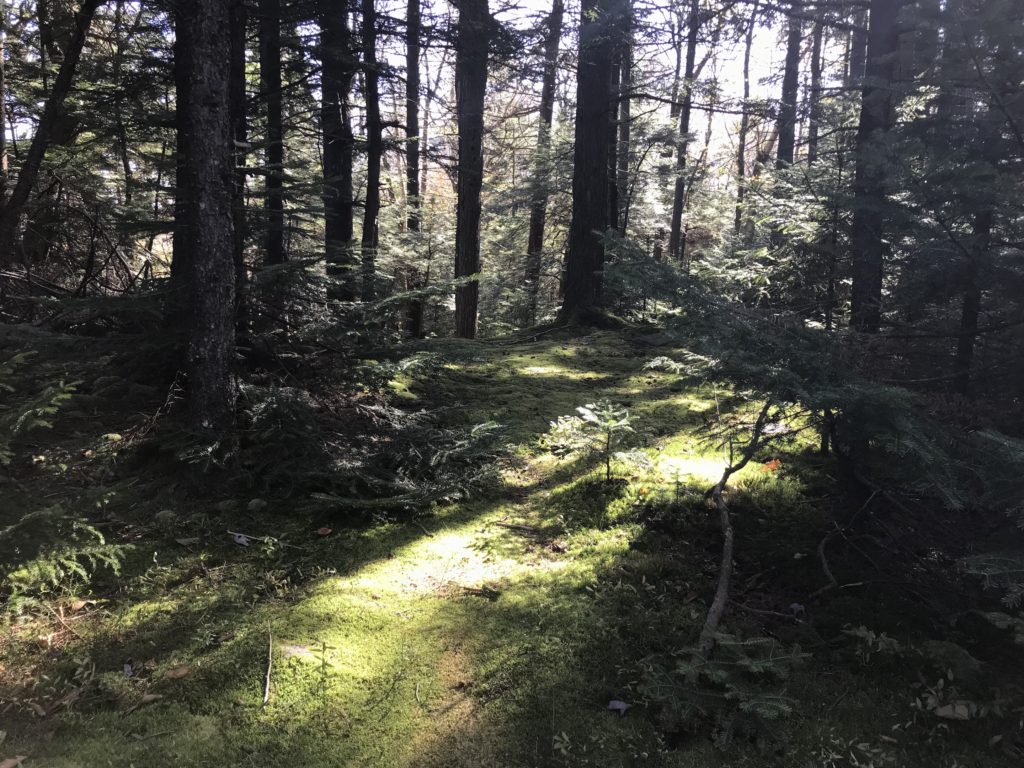 Halfway into Pine Plains, the going becomes very muddy and water-logged. Waterproof boots are required and there are several places where its obvious that hikers have bushwhacked around these parts.

After Pine Plains, there is a sign that direct the hiker onward on the blue-blazed trail to such Catskills wonders like Poet’s Ledge and Wildcat Falls:

The summit is visible from here, covered in its evergreen cap, and it looks pretty intimidating: rocky with sheer, steep drops. Here you can take a left at the red-blazed snow mobile trail for a few minutes until you reach more signage (pictured just below) telling you that you have arrived at the loop and can go either left or right. 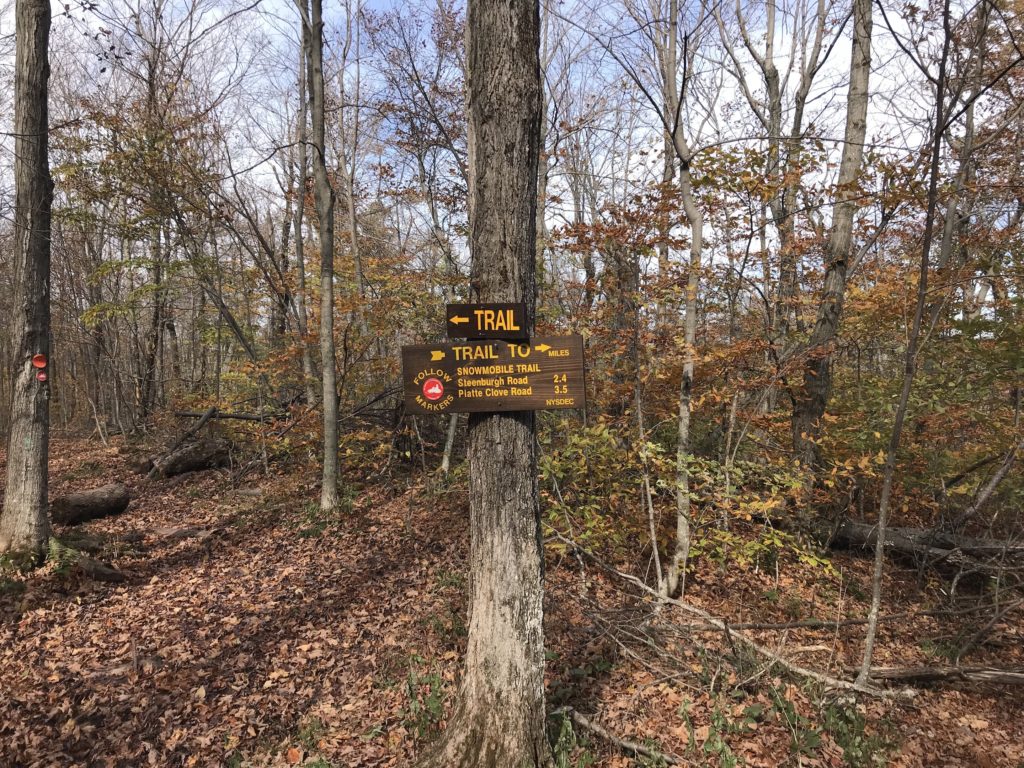 From here, if you follow that “TRAIL” sign and go right onto the snow mobile trail for the same short distance you just came, you will arrive at the access point to the bushwhack to the summit. There are faint blue markings on the trees making them seem like a little doorway to the wilderness and yesterday there was a pile of cairns marking the spot (pictured below), but you should never rely on cairns because they can get knocked down. On the day of my climb, I asked a descending hiker how to get to the peak and I talked to someone who had already done the hike. On my descent later in the day, another hiker confirmed the route with me before he proceeded, double checking that the cairns were still there. 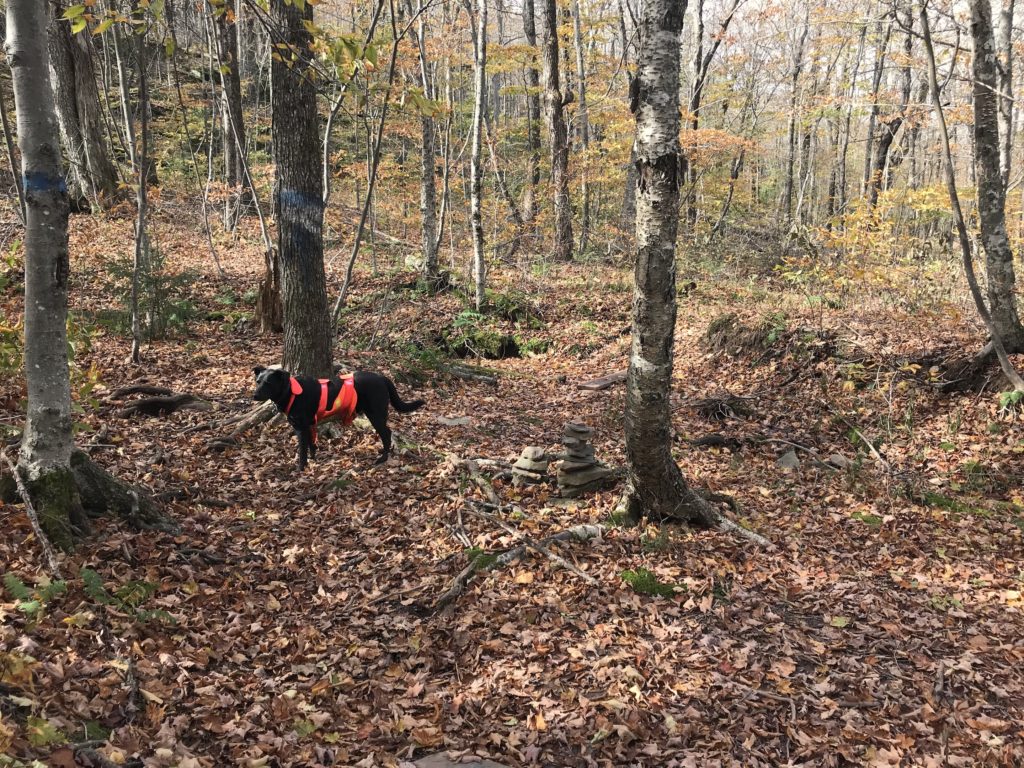 Yesterday, the dog and I ascended the summit starting at the cairns on the faint herd path that’s probably barely discernible in the summer, but yesterday there were traces of crushed leaves visible in areas from previous hikers as we wound up the mountain. On bushwhacks, you must also periodically look back to memorize the terrain into which you will be descending on the return. On the map, this herd path is represented by a dashed line, but there are no markings on the trail at all.

This is where the vertigo kicked in and I almost turned back. 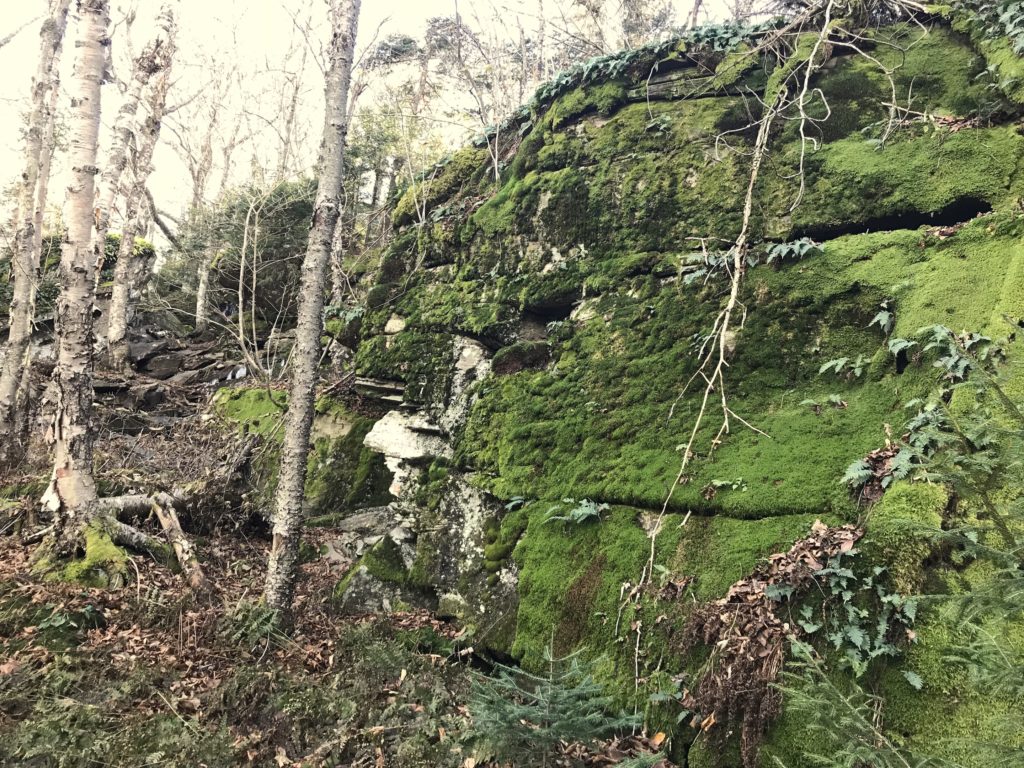 Catskill Mountaineer does very detailed descriptions of Catskills hikes, but I overshot their recommended short cut for the north access and their directions became useless, so I switched to the map from the NYNJ Trail Conference. There are two plane crashes on this peak that I missed, because there are three paths to the summit and I didn’t want to get confused. So I went to Hurricane Ledge and then made my descent, but will be returning to climb this mountain from Platte Clove because there are so many surrounding attractions. For example, Huckleberry Point is popular place where hikers arrive late in the afternoon to view the Hudson River as the sun sets.

Only very experienced, fit hikers should attempt this peak. The Catskill Mountain Club led a hike to Kaatskill High Peak last week and their volunteer members regularly conduct hikes. Check their calendar to find out what hikes they are leading in the future.