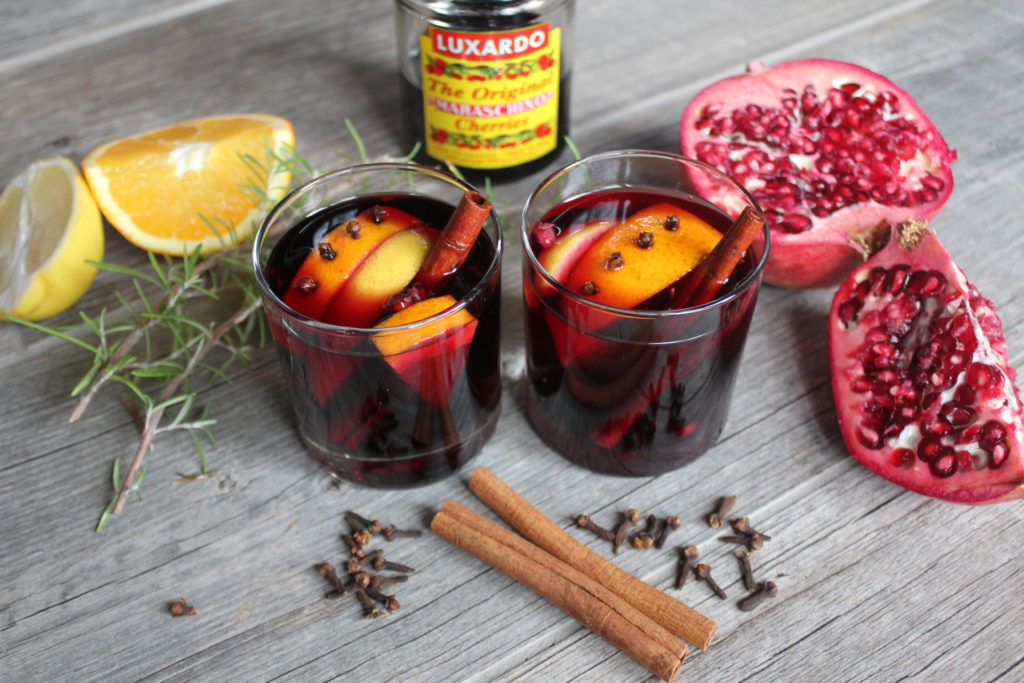 It’s going to be a Catskills Christmas this year, so there’ll be hot toddies, Irish coffee and spiced, citrus port.

Mulled wine is a seasonal, holiday indulgence, so it may as well be rich and sweet with some luxury ingredients. There were three lonely pomegranates remaining in the fruit isle at the grocery store, so one of them is now simmering gently with maraschino cherries, cherry juice, orange, lemon, cinnamon and whole cloves. As soon as the pomegranates were cut open, they exuded a thick, fragrant juice that was added to the saucepan. The cherries work well because they’ve been soaked in sugar, so there’s not really a need for a great deal of sugar in this recipe. If you inadvertently add too much lemon, use more of the maraschino cherry juice to dilute it. If your wine gets super-fruity, add more cinnamon. It might even take continual adjustment, but that’s half the fun and, of course, as the night goes on, your mulled wine will transform, perhaps being a completely different taste and smell by the end of the evening if it lasts that long…

If you double or triple the recipe below for a large party and your wine does simmer all night, you’ll need to keep adding water while it’s simmering. Instead of just adding water, dissolve a tablespoon of maple syrup per pint of (warm) water that you add.

Mulled Wine with Cherries and Pomegranates

Slice the lemon and orange into wedges and then peel them. *Save the peel for garnish. Cut the pomegranate in half. Catch any escaped juice and scrape it into a large saucepan. Separate the pomegranate seeds and any more juice it produces in a bowl and put to one side. Pour the wine into a saucepan and bring it to a low simmer. Add the lemon and orange to the pot, half-squeezing them to release juice into the pot. Add all the other ingredients except the cherries and pomegranate seeds. Simmer on a gentle, slow boil while stirring for about five minutes. Add the cherries. Muddle the pomegranate seeds to release more juice and stir them in. Simmer for another five to seven minutes. Remove from the boil and serve in small cups with the citrus peel garnish.

*If you like the zesty taste, don’t peel the citrus and push some whole cloves into the peel.