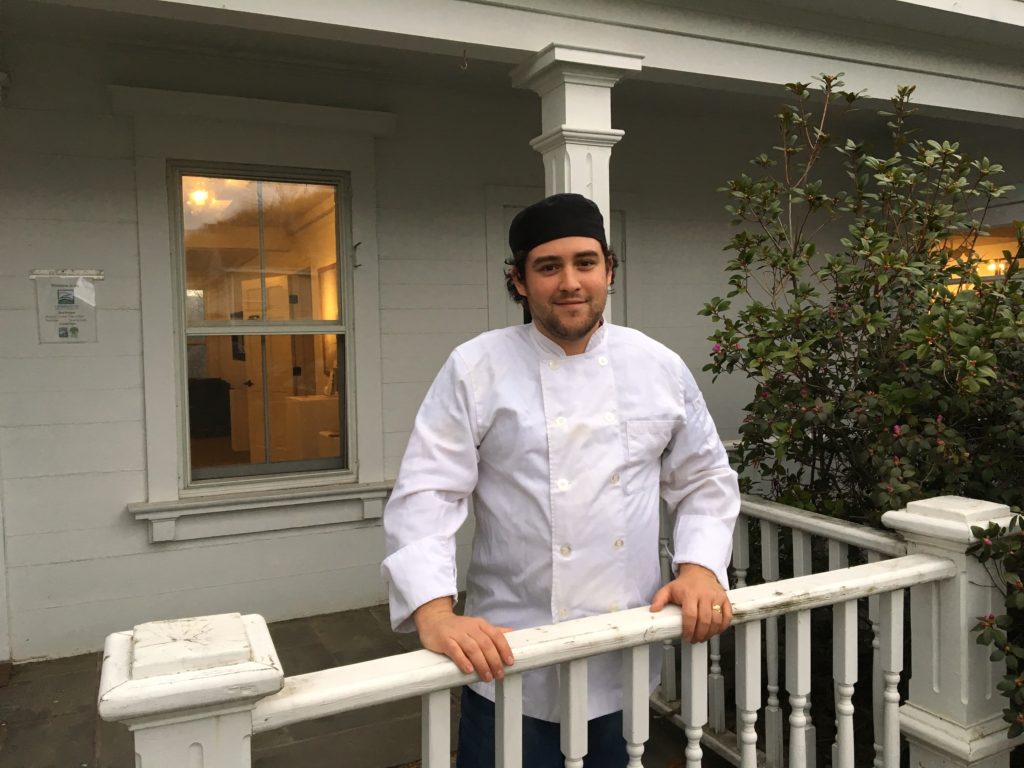 Rob Handel, the talented, dynamic and accomplished full-time chef at Heather Ridge Farm in Preston Hollow, grew up on a Catskills resort in Upstate New York and became interested in food at an early age through his grandmother, who ran the kitchen. “She really shared her love of food and cooking with me at an early age and I learnt a lot from her as a child. She sparked the interest in foraging in me. Whether the resort was there or not, I think her love of food would have been what turned me onto cooking in the first place,” he says.

After a short time away at college, Rob returned to work in the family resort, but quickly looked to further his career early: “I had been working with my family at the resort and I wanted to leave and strike out on my own and do something that involves more creativity and more latitude, using more local and foraged ingredients. You know, the resort was a classic Catskills family-style resort, so I was making roast beef for 150 people every night and that’s what those people wanted and it was a system that worked for them. But I wanted to be able to do more”.

Although these fabled mountains are continually welcoming new transplants as the cities experience the infamous urban exodus, it still seems like young people are still leaving the Catskills in droves. It’s always enlightening to meet energetic, young millennials like Rob who have never left, except for college, forging their own unique careers here. Rob adds: “I love the influx of new people we experiencing in the Catskills right now. A lot of my friends are people I’ve befriended through Heather Ridge who are second homeowners or recent transplants and I love that because it does bring a lot of fresh energy and vitality to the community. However, I would like young people to see people moving here and take a step back and look at their communities and see what’s unique about them and how they could stay and contribute to those communities”.

He met the owner of Heather Ridge Farm, Carol Clement, years earlier when he was much younger, when he was interested in beekeeping and a member of the Catskill Mountain Beekeeping Club, of which Carol was a member. “When my friends found out I was looking for something, it fortuitously coincided with Carol looking for a chef and they hooked us up.”

Heather Ridge Farm raises sheep, goats, cattle and pigs and has a farm store and a restaurant, The Bees Knees Cafe, open year-round. They also run eclectic, monthly supper clubs and host fried chicken dinners. The farm is also available to rent for large parties and weddings with full-service catering. The next Fried Chicken dinner is this weekend, September 30th.

Rob also runs food classes, workshops and foraging walks at Heather Ridge and other places like Cornell Co-operative Extension and The Catskill Center. He is also a member of the Mid Hudson Mycological Society. When we caught up with him last spring, he had designed a root beer that the farm bottles and sells, so he was working on the marketing and production for the root beer. He cans and pickles what he forages to use in the supper clubs and to sell in the farm store.

Rob has inspired many of the food posts here on Upstate Dispatch, like the simple syrup cocktail recipes.

Also, wild grapes are going to be ready to pick soon. They’re tiny, the size of a wild blueberry. The leaf looks like the cultivated grape leaf and the vines look very similar, but the grapes are much smaller and hang down in the cluster. They are very tart and they have this large seed. I strain the juice to remove the seeds and skins to make a grape soda or syrup out of it that you can put on pancakes.

UD: Are we coming to the end of our foraging time?

I think we have a few weeks left at least. There are still the wild greens out there. There’s garlic mustard, with a two year life cycle. In the spring, you’re picking the early shoots from the second year and the seeds that were dropped the year before are just starting to germinate. Those seeds are now grown large enough where you can pick the end of the first year garlic mustard.

There are still some other greens: dock, plaintain things like that. Nuts that are starting to fall, like hickory nuts and black walnuts.

A couple of weeks ago, I did a walk at the CIC and we found some blackberries that were out there still. There are still some black elderberry, which usually is an end of August thing, and lots of golden rod, which is still blossoming. You can harvest that, dry it and make a tea out of it.

UD: So how’s the Summer been at Heather Ridge Farm?

It was good. We started doing this Grange Kitchen, but a lot of people didn’t understand what the term Grange Kitchen means. We were trying to harken back to the concept of having a local grange and a grange hall. [Historically], the grange was a local organization to help farmers gather and share information. When one of the land grant organizations would get the results of a study, for example, the grange would get that and would be able to disseminate it. The grange hall was a place for the community meet and for farmers to get together have a meeting and talk about what the issues were and help each other.

We wanted to do a casual dinner at a lower price point. We put out a bunch of food and let people pop in through a two hour window, rather than have people sit down and stay for the whole thing. That went alright for a while, but we decided to move that into our Fried Chicken Dinners, which were a huge success. We developed this gluten-free fried chicken recipe and we stuck with the chicken recipe rather than changing the menu every time, alternating the sides. We had a ukulele band. The brewery from the Cary Center, the Helderberg Brew Shed, came and were sampling some of their beer and selling some of their beer. We had about 70 people show up for that. The next one is September 30th.

UD: Will the Supper Club dinners continue throughout this winter?

We’re still evaluating that. We don’t have any schedule. We’re going to evaluate and publish a winter schedule at some point.

UD: What are you doing right now in the kitchen? Are you pickling, preserving or canning?

I’ve done a lot of that and that season is coming to a close too. There are some tomatoes, but that’s probably going to end soon. So the farms are starting to transition into some of the fall produce: and I’m using that now. There are incredible sweet potatoes from Barbers. The winter squashes are just starting to roll in. Believe or not, it takes this long for the peppers to ripen. They start having green peppers in July, but to get the ripe, red peppers are only just starting to coming now. They still have some corn and there’s broccoli and cauliflower.

UD: Are there any classes, demos or workshops coming up that you are leading?

Right now, I have a workshop scheduled. It’s the final installment of the Catskills Center workshops, on the first saturday of October in Tannersville at the Platte Clove Preserve. If fall is shorter than we would like it to be there might not be enough to forage. We’re playing it by ear.

UD: When we last spoke in the spring, you’re go-to dish was avgolemono. What have you been cooking for yourself lately?

I’m starting to make more cool weather stuff. We’ve had a few nights where it’s dipped down into the high thirties, so one of the things that I really like to make in the cool weather is roast a whole chicken over a big pile of broccoli rabe. The chicken juice drips over the vegetable as it’s roasting. It’s a very simple dish. I don’t make any sauce for it. I’ve starting doing some soups at home to get ready for cold weather. I do a pumpkin spice mole that’s a kind of tongue-in-cheek jab at the whole pumpkin spice phenomenon!