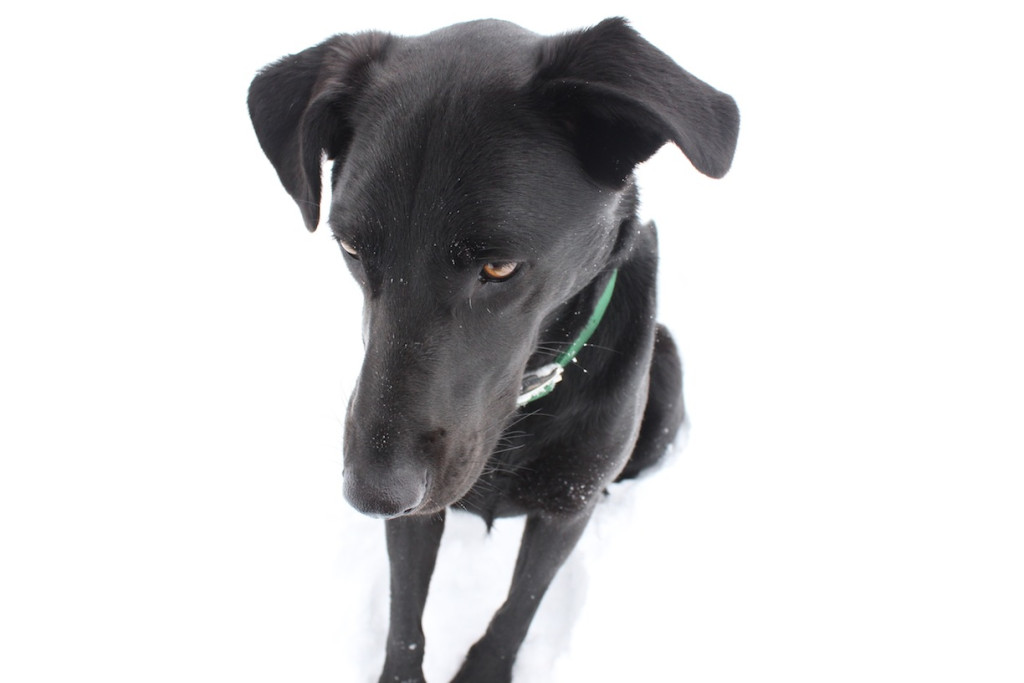 Years ago, a new country neighbor confided that whenever her husband went away on business she slept with a loaded shotgun by the bed, but I believe in accidents, sleepwalking and all the other disasters that Hollywood screenwriters can mustre. A shotgun only wakes you up after it has blown off your leg when you knocked it over reaching for a glass of water. A dog, however, wakes you up before something happens (or will ever happen).

Enter Alfie, my first dog, who barks when someone crosses the street a mile down the road, has a sense of smell so strong he can tell that the UPS guy will be here in an hour and follows me from room to room like a family member who’s afraid I’ll commit suicide. I only have to look out the window with a slight frown and he goes to the window and starts barking ferociously. Last night I gasped at a movie and he awoke with a start and issued a dead stare right in my eyes with one ear cocked until he was confident that all was well. He takes his position in the household as Head of Security as seriously as a Black Lab/Shepherd mix can. In Alfie is combined both the sheer comedy of a Black Labrador with the bossiness of a Shepherd. More important, as a first-time dog owner I don’t even see myself as the master of this dog; he’s not my dog, rather I’m his human. I can’t be alone in believing that the master should not be picking up faeces off the road and carrying it in a little bag. No, I am the servant for the next… ever.

What nobody tells you before you get a dog is that dog ownership is, in fact, a lifestyle. If, before your dog, you once were a pasty indoor person, a solitary writer, say, you are now a natural born hiker who walks three times a day for at least 20 minutes in any kind of weather or temperature. If you wore clean clothes before dog ownership, you will now be continually dirty. You will vacuum three times a day and find very clean black hair in your white laundry. Before you were a dog owner, if you didn’t mind rain, you now dread it because it means mud all over your kitchen floor through no fault of your own. Sometimes your country dog, an avid gardener, might prefer your lavender bush to be inside the house, or he might decide to replant your Aloe Vera. If only he could have mentioned this, so you had time to buy him some gloves.

People call their dogs “their children” but you can’t take your dog into a restaurant like you can a screaming baby. Most people coo and fawn over a child, but only fellow dog people will counter your exuberant puppy with matching enthusiasm, the likes of which comes as sheer relief. Dogs aren’t allowed in anywhere, so they get left home alone a lot and when you go on vacation, so must the dog. A very common problem for shelter dogs is separation anxiety and I try and take Alfie everywhere. I did get him a crate and it’s his little den, but if he can’t enter the building with me he prefers to wait in the car like a small dog likes to be in a handbag. If you get a dog and he has separation anxiety, don’t suffer needlessly, start crate training immediately. Of course, never leave a dog in a car over the summer. Expect to never go anywhere in the car with a Black Lab during the summer months unless your car has a commercial refrigeration unit. Even in mild summer months, Alfie is mostly found lurking in the shadows, panting. On winter hikes, he dives into freezing swimming holes like its 80F. When he comes out he’s roasting hot and when he returns from an hour in the snow, his paws are always hot. Don’t get a puppy in the midst of a Catkills winter because you will sleep in your snowboarding pants for the first three months so you can let him out to poo at 4am.

I did bask like a true hero in the unexpected glow of admiration from every dog lover I met when I told them my puppy was a rescue from the Kingston ASPCA instead of a purchase from a breeder. Moreover, there’s such a thing called Hybrid Vigor, as my people call it. Mixed breeds are hardier, stronger and more limbre than purebred animals. I’ve never met a purebred animal that didn’t suffer bad hips, weak immune system, dodgy posture or dietary difficulties. I know someone who has to manually clean her purebred dog’s vulva because the poor animal is too short to reach her hindquarters. I rest my case.

The most unexpected aspect about having a dog is their sheer joy de vivre like it’s their last day in paradise. Alfie’s motto is “bring it”. There is no hike too long, no snow pile too high, no burrito too large and no temperature too cold for him to handle. There’s only one thing he hates and that’s a blanket. He simply does not understand what a blanket is and won’t abide it. He might suffer a blanket for about five minutes but it goes in the category of the other things I make him wear for fun like hats, headscarves and bow ties. When my husband and I got him from the shelter, they had three possible dates of birth for Alfie and, in retrospect, we now suspect he was nine months old when we brought him home because he has almost doubled in size. A year later, priority number one for the day is still trying to wear out the dog. When I can get away with it, I’ll pretend to throw the ball, so he’ll spend twenty minutes running all over the place looking for it: job done. This winter’s truly hilarious spectator sport has been throwing a stick from the road into our field over a three-feet-high snow bank that the plough has created over our ridge’s water gulley. Alfie dives over the bank and flies through two-feet-high snow like a dolphin across water’s surface to retrieve the stick, but on the return journey he flounders in the snow bank. I almost die laughing as he sinks into its fluffy depths, gamely struggling until his claws get a grip on the road’s edge and he hauls himself out, coated in snow from head to tail. Repeat until exhausted.

Talking of tails, the wagging Labrador tail must be one of life’s wonders of the world, moving from side to side when he’s happy and round and round like those old car antennae when he’s looking for a ball. When I approach for a hug, if he’s lying on the floor the tail bangs on the ground as if inviting me to sit. I’m in love with the ears. Black, silky, soft, floppy: a combination of the flat Labrador ears and upright German Shepherd ears. Remarkably, they are completely independent of each other and have a necessary multitude of positions. When we hike, one earflap is slightly raised, listening ahead for imminent danger. The other ear is pressed back, monitoring my progress behind him. When he dozes, one ear is fully erect and follows my movements like some furry, Orwellian, revolving satellite dish. When he wants what I’m eating, his ears flop towards his eyes in a full-scale barrage of intolerable handsome. Alfie is so handsome that professional photographers take his portrait (see the picture below by Shannon Greer). 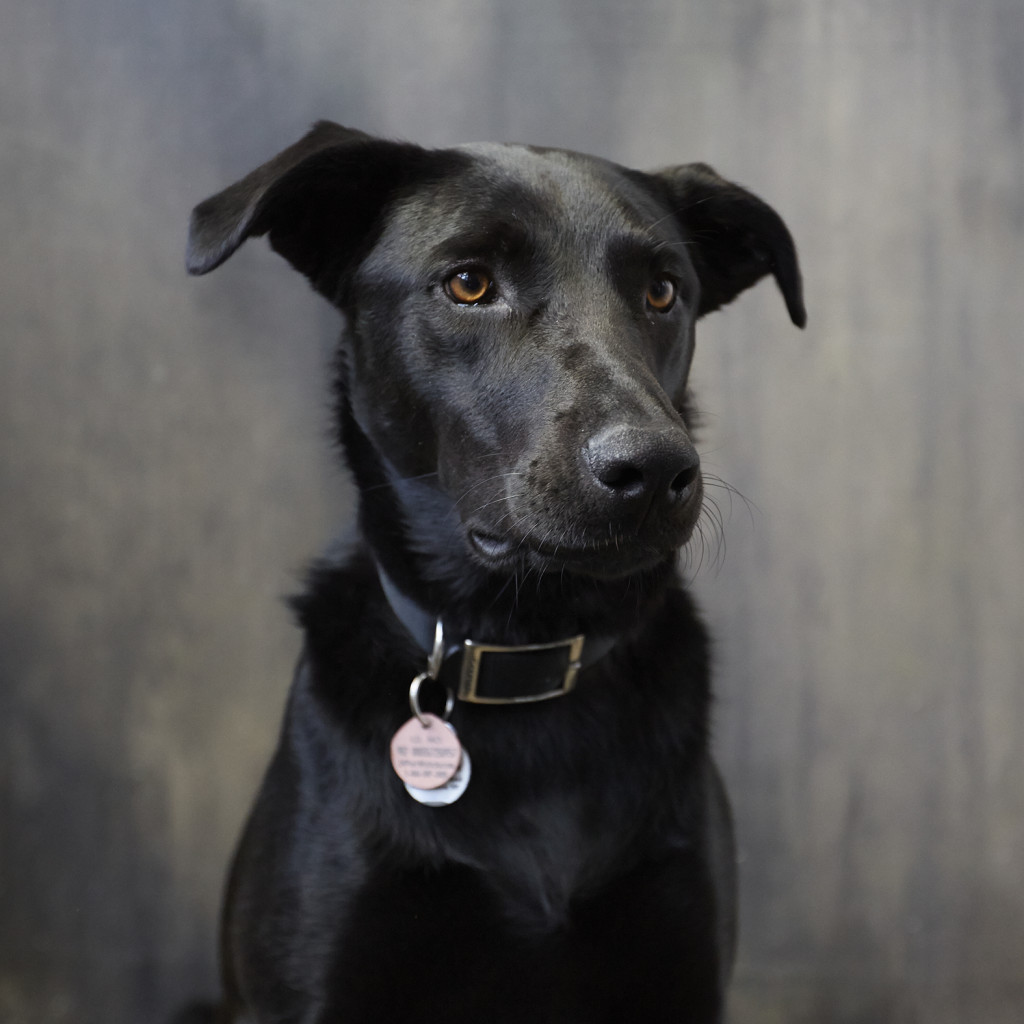 Head of Security is also responsible for sniffing everything that leaves and enters the house like a TSA shakedown, which means socks, shoes, bags, coats and, sometimes asses. Alfie sniffs the air and then licks his lips like he’s also tasting the smell for good measure.

Most important, with other dogs, Alfie is a lover not a fighter, an extravert who is never happier than when he’s in a room full of people or animals. He’s as fast as a whippet and can outrun any other dog, which makes him cool and aloof in the face of aggression, declining all duels. A Southern gentleman, he was rescued from a kill shelter in Louisiana after being picked up as a stray puppy in New Iberia, a town founded by the Spanish who briefly owned the state for thirty years until the French took it back and sold it in 1802. Alfie was driven from Louisiana with a couple of other similar dogs (maybe his siblings) to Kingston when he was a puppy. He was named Noble by the shelter after his character, for he is indeed a noble fellow, a dog of his own, independently minded, loyal and a tad rebellious. Being impervious to pain, he’s not fazed by the vet and adores her dearly and is a big hit with her assistants and the receptionist. A “counter surfer”, he likes to assist the vet in entering data into the computer and insists on helping to prepare any meds or vaccinations.

I believe this to be a cosmic accident, but somehow the utmost importance of yoga slipped in to his DNA in addition to his obsession with the art of retrieval. Urdvamukasavasana is a thrice-daily routine that happens with or without stick, meaning, the stick might or might not have been retrieved when urge to pose strikes.

Finally, to the digestive system: Black Labradors have an infinite capacity for food. As one person said: “there is a black hole where their stomach should be”. They will eat anything and not get ill. Food goes in and in and in and yet, he remains ravenously on the brink of starvation, ready to eat his own leg if necessary.

I knew Alfie was the dog for us because I was hesitant at the shelter, but when we took him for a walk, my husband took the lead and I brought up the rear, lagging behind to put on my coat and gloves. Alfie, who had been striding ahead with my husband, resolutely ignoring a chorus of farewell barking from his shelter mates, suddenly stopped and turned around to watch me. He was waiting for me to catch up, gave me a sniff and we all continued together.

Read Part 2 Dog is in the Details, and Part 3: Act of Dog, of this series.

5 thoughts on “First Person Dispatch: For The Love Of Dog”