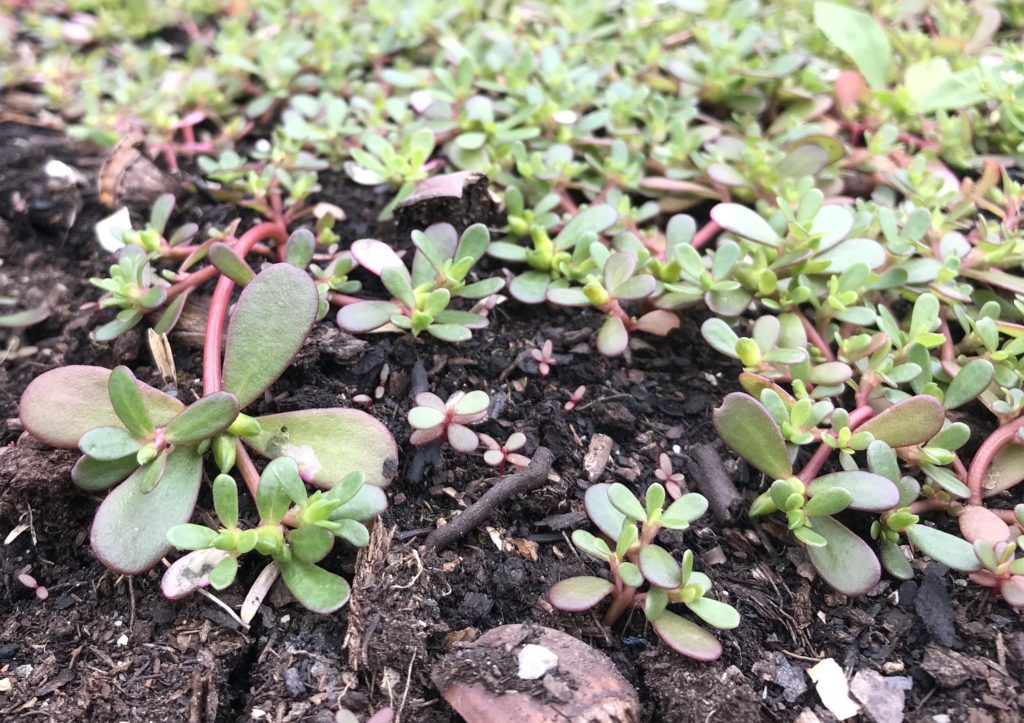 Most of the weeds that are considered a blight on the lawn are edible, including purslane. One of the tastiest and power packed with nutrients, purslane is quite distinctive from other weeds because it’s a succulent so when you bite into it there will be a crunch and some juice that tastes like a mix of lemon, cucumber, and a dash of pepper that’s much milder than arugula. The juice contains pectin, so it also makes a good thickener instead of flour for gluten-free cooking like soups and stews, but really it’s good for every meal.

Purslane is said to have more Vitamin E than spinach and more beta carotene than carrots.  Allegedly, It’s also a rich source of Omega-3 fatty acids. It goes nicely raw in salads, or cooked well in soups. If you put it in a soup, cut off the red stems as they are a tad bitter. Leave the red stems on if you’re putting it in a stew.

Like spinach, a widely cultivated and popular vegetable, purslane is on the FDA poisonous plant list. Like spinach, purslane is high in oxalates but so are beet greens, lamb’s quarter, rhubarb and Swiss chard – also very popular vegetables. This is something to be considered before you eat it. The FDA states that these vegetables interfere with calcium absorption in the diet in certain amounts. Oxalates are present in most foods, even fruit and nuts, and are virtually unavoidable, but high levels in the body could lead to kidney stones or other ailments.

However, despite this it is becoming so popular that farmers are now selling it at markets and because it takes little to no cultivation or effort, naturally appearing on the understory or in empty beds for two months between summer and fall, it’s a vegetable with a high profit margin. If you buy purslane, you’re helping a farmer. And of course, if you have a garden and find it carpeting your raised beds, it’s free for a couple of months out of the year. If you don’t want to eat it, use it like a nutritious cover crop to restore your soil and turn it over in the raised bed like farmers do with clover. Just don’t spray weedkiller on it.