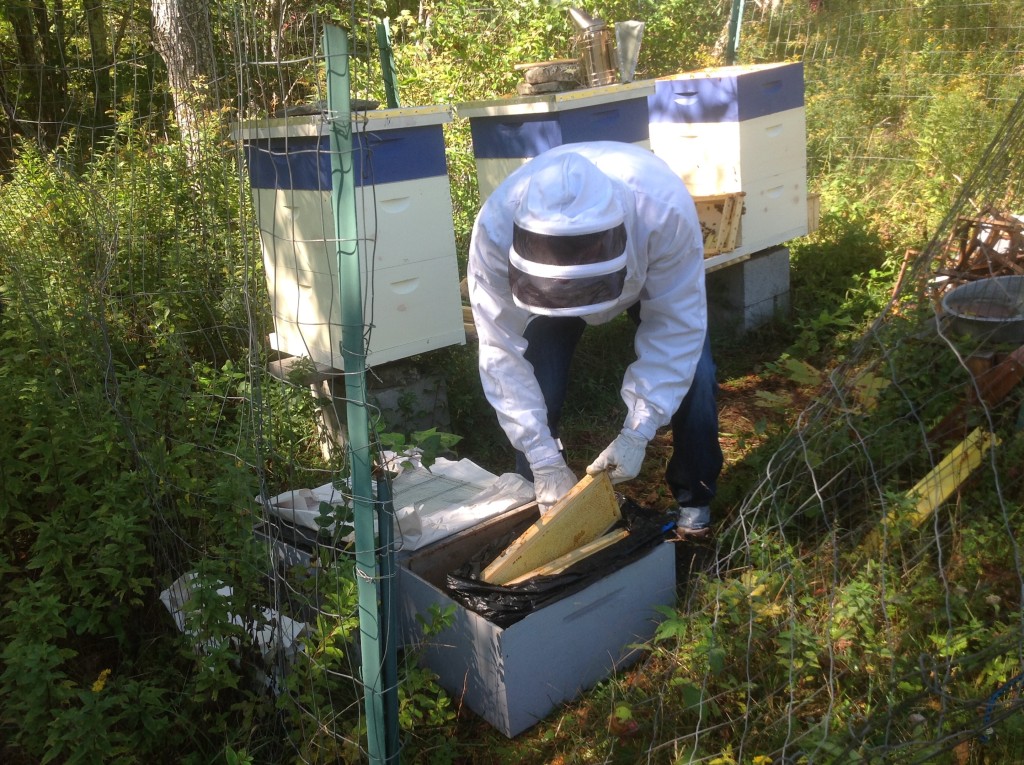 Last week, I spent a morning on Chasing Honey Farms in Fleischmanns watching Chase Kruppo harvest honeycomb from his three hives. I had to beat a hasty retreat after the bees became agitated and it turns out I was correct to turn on my heel when I did. Shortly after my departure, some of the bees swarmed and stung a fellow observer, but I’m told the chap took it like a champ.

Hives are numbered 1 to 3 from left to right, as pictured above, and Kruppo has made detailed observations. Hives 1 and 2 have Italian honeybees and Hive 3 contains Carniolan bees. Kruppo installed the hives and the bees in the first week of May of this year and wanted to experiment with different kinds. “I wanted to see the differences in how they perform in the area. Each different type of bee has different characteristics and they are bred for either resistance, or honey production and how they manage their population.”

He picked the Carniolans for the rapid expansion of the population in the spring and then a rapid decline of the population in the fall. The rapid increase early on allows them to quickly build out the hive, and expand the brood nest, producing honey as soon as possible. Supposedly their population drops off in the winter, allowing them to have more food for fewer bees. Hive 3 made their speedy start as predicted, but the Italian honeybees had caught up by the summer. Hive 3 will be under close observation for a sharp population decline in the winter. Hive 1 (Italians) was weaker than the other two, which could be due to the queen not laying fast enough, the position of the hive (if it was more shaded) or there could be some honey-robbing going on.

Let’s hope the Catskills doesn’t have another brutal arctic winter, but if we do, the Carniolans will have more food than the Italians. To survive the winter, the bees huddle in a ball much like penguins but the last two Catskills winters were gruesome punishment for the industry, destroying countless hives across the mountains, with many lifelong beekeepers being forced to start again.

Last week’s harvest was eighteen frames of honeycomb and the Carniolians had filled in almost a whole empty frame (without a wax foundation) in the preceding week. This divine amber nectar tastes light and ethereal and the bees are being raised pesticide-free, which makes it seem so much sweeter. On his five-acre property, Kruppo has a large carpet of blackberries, strawberries, a heritage apple orchard and various wildflowers.

Kruppo has not even finished tallying his harvest, but the current count is about 150-175lbs of cut comb for the five members of his Honey CSA (including the company’s own share). He was not expecting as much honey as this and says that people are clamoring to buy it. “Going into it, based on how the hives were set up, with relatively little to start on, with a brand new queen, three pounds of bees with no wax comb in place, they had to basically build everything from the beginning of May through September. A lot of the time, the general advice is that with situations like mine, you’re unlikely to produce excess honey, if any at all, in the first year. So being as we were able to take as much as we did and still leave honey inside each of the hives [for the bees to live on over winter], I feel very happy that the bees were able to succeed so well. I’m looking forward to next year, when we won’t have to start from scratch.”

Go to the Upstate Dispatch facebook page for video. 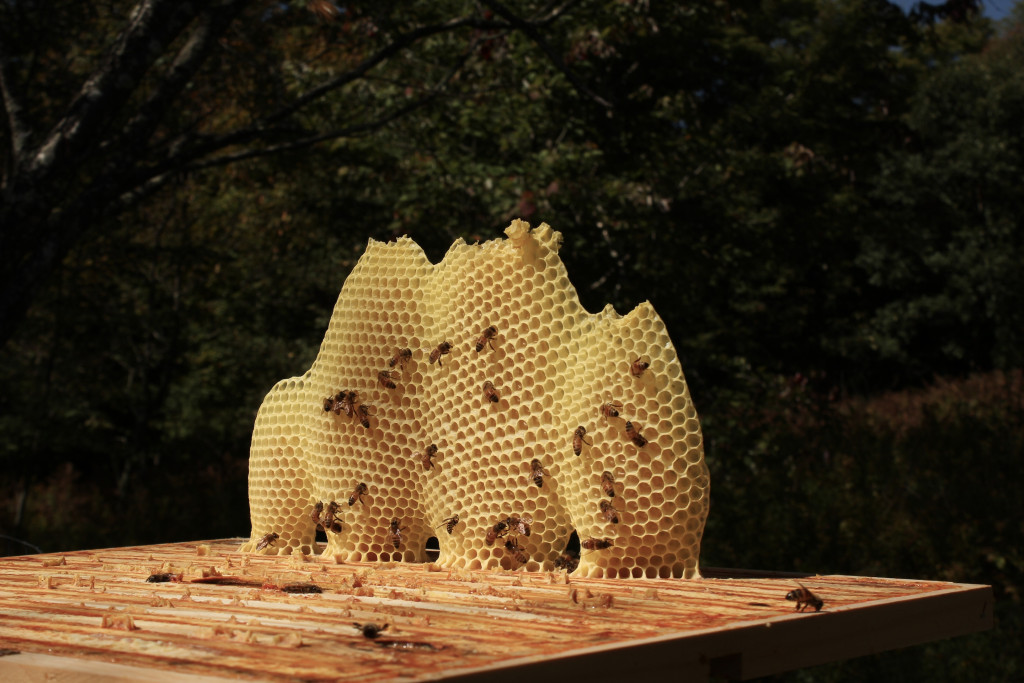 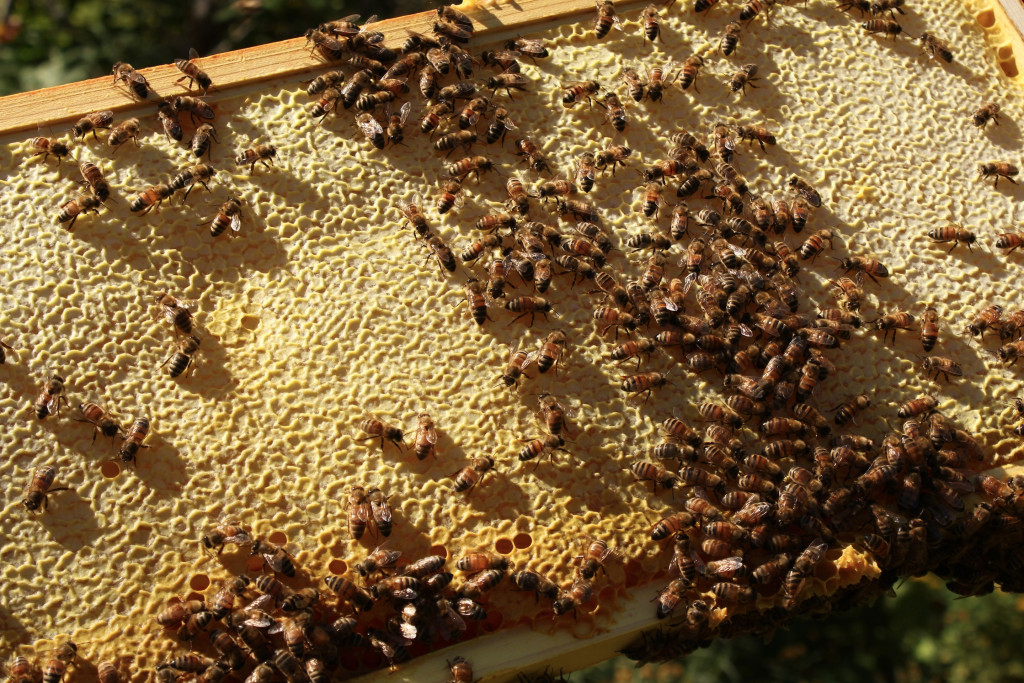 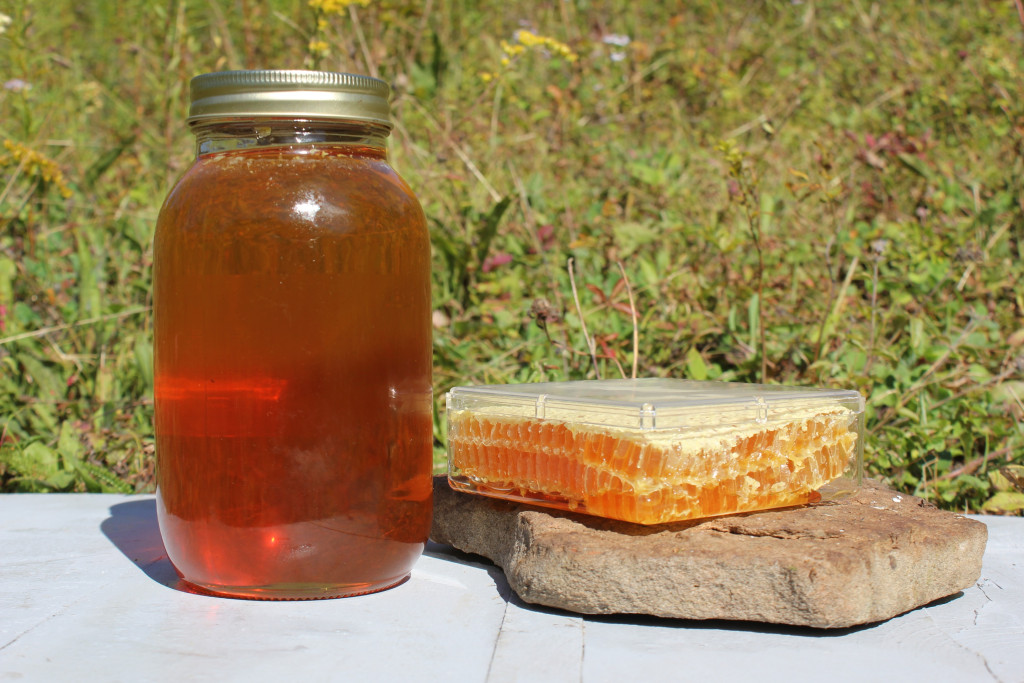