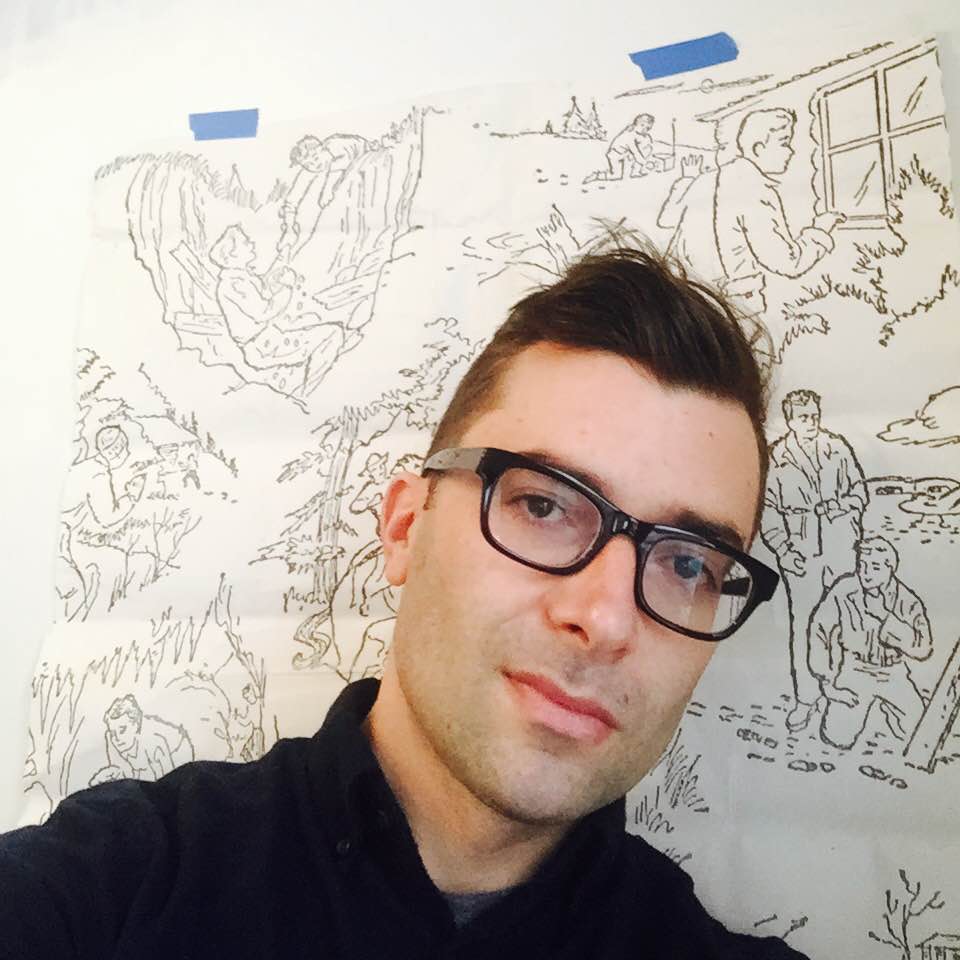 Entrepreneur Keith Carollo closed his NYC business and moved to the Catskills full-time with his husband Chris. They are both pursuing careers in the arts, with Chris directing the local school play.

It was for financial reasons really. We had a business that we closed and at the same time, they were increasing our rent in the city, so it just seemed like it made sense to come here where our expenses would be lower. And that became the next adventure for us.

We had a little bit of money saved from the business and decided to take that money to try and pursue things that we had always wanted to do. Chris has got really involved in the theatre and I’m working on an art career.

What was your business in the city?

We had an online store selling clothing and gifts: a bit of everything. I don’t spend anywhere near as much time on the computer now as I did then. So that’s good. We had the business for about 15 years. We started it really early in the lifespan of the internet as we know it now and it did really well in the beginning and then business just got more difficult; so it was just time to do something else.

So you were pioneers in the internet selling?

Yes, we would have people telling us that we were the first order that they ever placed on the internet.

Are you from New York?

No we’re both from Chicago.

Why did you move to NYC?

I wanted to be a fashion designer. I wanted to go FIT, but I had a little bit of money. It got a tiny bit of money from an inheritance, but I decided instead of using it for school I would start a business.

How do you like the country? Which do you prefer?

Oh, I prefer the country. It’s surprising because I’ve always been a city boy, but I love it here. Right away, I was struck every day by how beautiful it is. The outdoors, having a yard, having a front porch and we both feel like it’s oddly more social than the city. I always feel like there’s tonnes of things to do, but generally I don’t do that much. [Laughs].

What is your ideal day of relaxation?

I love to go out for coffee, so I would go somewhere for coffee to meet a friend. I love to hike. I recently learned how to drive and that’s really fun and brand-new for me. I love to drive to a new town that I’ve never been to. Table on Ten is over an hour from where we live, but sometimes I’ll just drive there for a cup of coffee.

So you’re working on an art career while you’re here. How’s that going?

We have a little office in Kingston, so we have our work schedule every day and will go to the office every day. I’m work on making things, but then also entering Call for Entries and contests and things like that. This year I’m focusing on entering European contests because the prize money’s better. Last year, I entered the Call for Entry for Kingston’s 0+ Festival, so I painted two murals in the festival.

In some ways, we feel busier than we were in the city, which is weird because we’re not working, but we have a lot of appointments. Right now, Chris is stage-managing the local high school musical and he’s just working so hard at it! He’s been doing some plays and always has rehearsals or stuff like that. Typically, I try to get to my office by 9 at the latest. I always go to Outdated Cafe to get my coffee. I usually grab a little lunch somewhere. I’ve made friends with a few people that work in the area. An ideal day includes a cocktail at Stockade after work. They have a cocktail called the Paper Plane, which I highly recommend.

I’ve been asking this of everybody lately: what is work?

I think it’s something that you do that you love that also benefits others. I’ve been very fortunate. I’ve worked for myself for a long time. I definitely think having passion for what you do is important. I do think work is art. You hope that you’re giving service or help to other people.

I would say that the natural beauty by far, but also, I do feel especially in Kingston that there’s this cool energy. There are way more cool people here than I thought there would be. We live a mile from Mount Tremper Arts and I remember, when we first moved here, I couldn’t believe there was a dance space here. It’s pretty wild stuff and I was on their board for a short while. That’s actually where we got married. In the Catskills, there’s this great combination of beautiful nature, and then some culture and design.