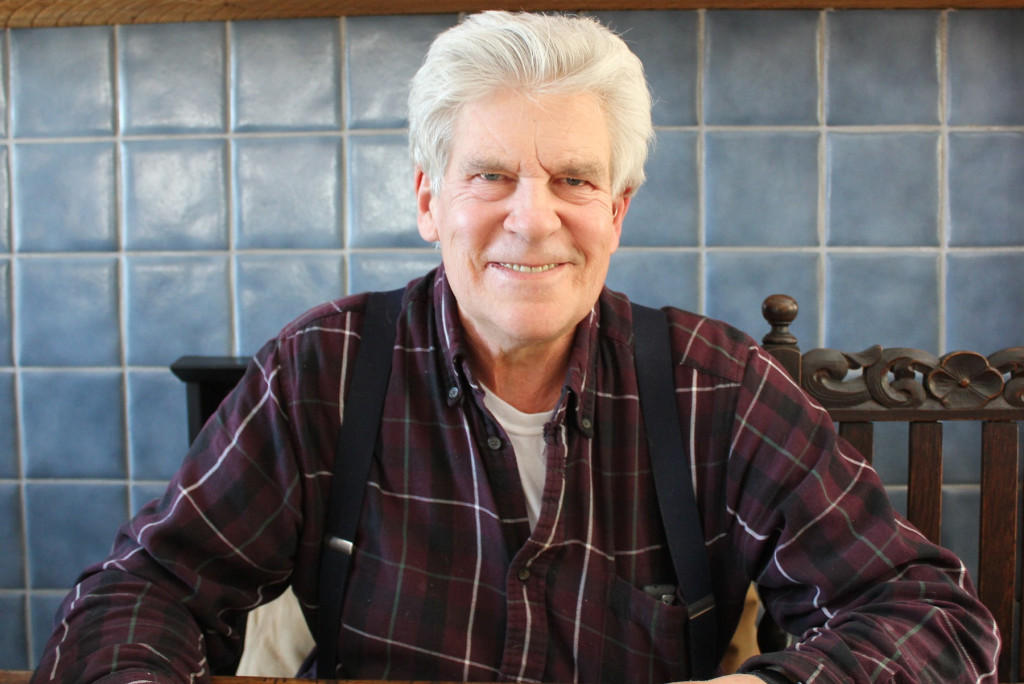 John Hoeko, a lifelong fly fisherman, owns Fur, Feathers and Steel in Fleischmanns. He’s writing a book about his life and times and his work with the Catskills waterways.

My whole life, except for one day. I was born in Jamaica, Queens. My grandfather was Chief of Radiology in a hospital in Queens. He thought that the local hospital here in Margaretville, the old one, was too provincial. So he insisted I be born in New York City.

So you’ve lived here in Fleischmanns ever since?

Yes, my parents originally lived off Ellsworth Avenue, while they were building our house.

What was Fleischmanns like when you were growing up?

I’ve been asked this question a thousand times. It was extraordinary, an incredible difference. All the hotels were here, and it was primarily a Jewish resort, but not a Borscht Belt type of resort. You had more people in the arts and culture: Viennese, German, Austrian Jews as opposed to Russian-Polish Jews, pretty much. We had an antique dealer, the A&P and we had Nat Israel’s camp and hotel supplier. He made the best kosher dill pickles. He taught my father how to do it. This guy Lustig used to sell antiques to Sigmund Freud in Vienna. The population of Fleischmanns and environs swelled to about 10,000 in the summer, but then all the hotels burned down. For the next generation, there was cheaper airfare, young people were expanding their horizons and the previous generation was old. Since there wasn’t a dollar to be made, they closed up and the inevitable happened. There was a horrific series of fires.

Where does the Hoeko name come from?

My grandparents on my father’s side had a farm in the Red Kill Valley: a beautiful 250-acre dairy farm. They had Guernseys and Jersey [cows]. My grandfather was a beekeeper too. He learned how to forage for mushrooms and berries. Then in the thirties they went into cauliflower production too

Do cauliflowers grow really well in this region?

It’s the world capital. It certainly was. Not Fleischmanns only: it was the Red Kill Valley, Halcott Valley but primarily the New Kingston Valley. New Kingston was big. My father used to take a load of cauliflower to the market either in Philadelphia or Hunts Point. If he did it in Hunts Point, he would go to Long Island because potatoes were grown there so prolifically and cheaply that he would buy potatoes and sell them here and make money on the way back. He would also stop at Carbondale and pick up a load of coal. Then, he wanted to increase his cauliflower production and it was during the war and there weren’t any tractors available, but there was a place in Hobart called Foote Brothers, they had this thing called the bulldozer. When cauliflower boom declined he discovered that this bulldozer had a blade on it and he got into the excavation business, which is in my blood too.

Well, not wells with it, but foundations, ponds, landscaping. You need a backhoe for septics. But to answer your question about the name Hoeko, my grandparents came over in 1917 during the Russian Revolution. They were from Bellarus, Minsk. They had vast landholdings over there that was very fertile land for agriculture. They lost everything, came here and my grandfather worked in the coalmines in West Virginia for twenty years, saving up money. My grandmother worked in boarding houses in New York City, and then they bought the dairy farm. Now today, it’s a Chinese summer camp for kids

The old homestead. I spent all my summers up there.

I’ve been retired for eight years, but I had a career in civil construction. I ran my father’s business and then I had my own business and then I worked for other companies. I was known for my ponds. I didn’t consider it excavating ponds, but I considered it sculpting ponds. Typical ponds are round or tear-shaped. I used to put graceful curves in and that sort of a thing. I liked my ponds to be incorporated into the landscape, not just blown out of it.

What are you starting now?

This is a full-service fly-fishing shop.

Operating in the winter too?

Yes, although I’m considering carrying other items in the winter. Maybe cross-country skis and snow shoes, that sort of thing.

So you’ve been a fly fisherman all your life?

Since I was about seven or eight. My uncles on my mother’s side taught me.

Where have you fished?

I went to Columbia University for about two and a half years. I hated it. I was in a five-year accelerated program: engineering and liberal arts. I didn’t like the program. I had come out of a four-year military school for high school. I went to school in Fleischmanns until the eighth grade and I should have stayed. It was a wonderful school. I hated military school. I lost my study habits and didn’t apply myself at Columbia. All I did was spend my time down on 96th Street at the Symphony watching film revivals.

Then they suspended classes during the riots of ’68, I think it was. I just hated it. I’d wake up in the morning with a layer of soot on my pillow and the noise of the garbage trucks. So I said goodbye. My guidance counselor said, I think you’d like the University of Denver. They had one of the top business schools in the country at the time. So I switched to business. I used to fish more than I was in the classroom. I hung out in a fly shop, which gave me inspiration for this place. I read voraciously every angling book that I could. I have a collection of about 300. They are not here {in the store} yet. I’ve fished in Wyoming, Montana and Idaho.

And you protect the local waters too. Are you part of an organization that does that?

I feel that people who fly fish have a responsibility, a duty even, to give something back for what they take out. Conservation is a big word with me. I’m a member of Trout Unlimited. I got an award from them in 1976.

How many species of trout are there in the Catskills?

Three. The Brook Trout, the Rainbow Trout and the Brown Trout.

I’m asking this of everyone lately. What is work?

Life. Play. Being and doing. It’s anything but sleeping. To me everything I do is work, but the work is play. It’s receiving. It’s giving. Giving is far more important to me than receiving. I much prefer to give. That’s why I feel that it’s very important to get people involved in conservation and preservation. Trout Unlimited is dedicated to the preservation and enhancement of cold-water fisheries in North America.

Do you have a problem with garbage in the streams here?

Absolutely. That’s why I conducted a stream clean up project last year. It was quite successful.

What else to do you have to do to be a steward of the water?

Years ago, I did water monitoring in the Bush Kill. I monitored dissolved oxygen: the higher the better for trout. Water turbidity, E-coli, My results went into the DEC.