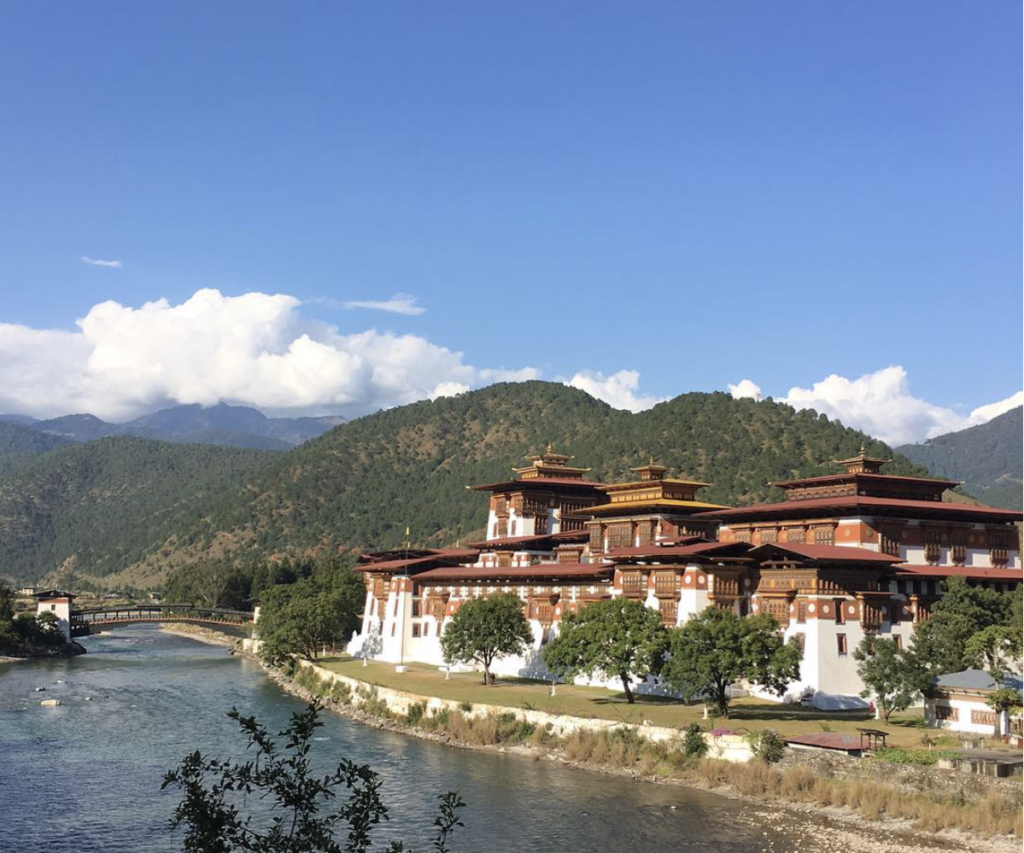 I recently got back in touch with an old guest on my radio show, writer Linda Leaming, an American who moved to Bhutan twenty years ago. Linda and I are beginning a podcast series of interviews that we will conduct between here in the Catskills and her home, Thimphu, the capital of Bhutan, because we have found that there are many similarities between our lives. We are both living in stunningly gorgeous, mountainous, rural regions in countries in which we were not born, with different cultures, and in doing so, we’ve learned so much about ourselves, the world and have much to share about this experience.

When I interviewed her in 2012 she had just published Married to Bhutan and now has written a second book on this magical country called A Field Guide To Happiness. You might recognize Bhutan’s ornate Tiger’s Nest temple, covered in colorful prayer flags, that is built on a top of a mountain, famously only accessed by a rope walk attached to a sheer rock face. Talk about vertigo! One day I will climb that rock face, but for now, I’m dealing with other challenges here in the Catskill Mountains. I can’t even go all the way up a 50 ft fire tower. To prepare for our radio show last week, I read her second book A Field Guide to Happiness and in talking with Linda again, I have experienced what she calls “drive-by enlightenment”.

I’m a city girl and when you live in the city you develop a thick skin, which for sensitive introverts like me is pretty useful. City living is pretty anonymous. In living in the country, it’s a relief to relax and remove that big, old, thick skin like you’re pulling off a heavy coat. In the dumping of the thick skin, all the “feels” come flooding in. This includes not just a new-found love of nature and friendship found locally, but also the fear and rage that is continually fed to us through the media. And in America, we have rage in abundance. I didn’t realize that I had been soaking it up like a sponge and did not notice how it was affecting my sense of well-being.

Last week, I took a quick jaunt down to New York City last week to see friends and wasn’t there that long before another old friend, who had also moved away, starting talking to me about how much he notices the anger in NYC now that he’s moved away, but it’s not just a city-wide problem, it’s a systemic problem reaching us constantly through the internet. Writer Hunter Thompson called it “Fear and Loathing” and named a few of his books similarly, like Fear and Loathing in America & Las Vegas, or Fear and Loathing on the Campaign trail, when he was covering politics in the late sixties. In our era, it’s related to the increasing cost of living combined with stagnating wages.

Part of my problem, though, is the isolation. I work from home and spend a lot of time alone, which has it’s very good and very bad effects. Linda and I touched upon this in our first podcast, which we recorded today – the perfect way to spend the Spring Equinox – that I am now editing, but I’m hoping we’ll do one podcast solely on this subject. Geographical isolation definitely has its benefits, although if you combine it with certain social media, it might just send you bonkers.

I’m hoping that our periodic podcast between the Catskills and Bhutan will be a lifeline in studying an ancient philosophy, comparing notes on our lives and feeling happiness in one of the most beautiful parts of the world: these Catskill Mountains. Already having read the book once has helped enormously. It’s split into 22 recommendations that Linda found has helped her navigate a country that is very different to where she grew up. To give you an idea, Bhutan measures Gross National Happiness instead of Gross National Product because it cares about it’s citizens. Life is considerably slower in Bhutan. It’s a Buddhist nation having adopted the Bon philosophy. They don’t use pesticides, don’t have guns, and still have endangered Bengal tigers roaming their mountains. When approached by tigers they don’t shoot them, they just open an umbrella towards the tiger and that scares them off. Always take an umbrella when hiking in Bhutan. They have high mountains – the eastern Himalayas – and lush fertile rain forests. Kindness is a way of life. Such is the success of conservation efforts in Bhutan is that it is the world’s only carbon-negative country. It’s not merely carbon neutral, but it sucks up carbon from the rest of the world.

In both areas, the Catskills and Bhutan – or Thimphu where Linda lives – walking in the forests and over the mountains is a breath-taking adventure and, if you know any writers, many of them cite walking as a necessary past-time. In both areas, there is much need for collaboration in our communities. People help each other and there are many volunteer opportunities. Sitting on the boards of non-profits in the Catskills is a way to contribute what’s called community service: helping others.

Watch this space for our first podcast. Happy Spring!