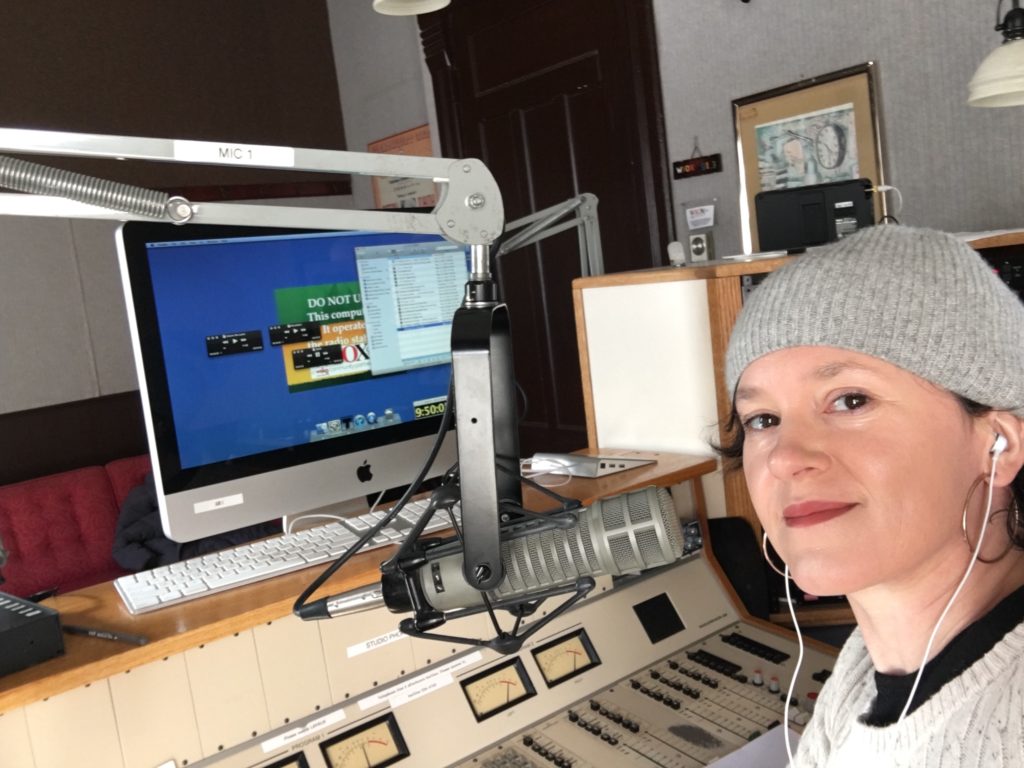 Here’s a picture of me working hard at the radio station while I take a break from Upstate Dispatch this week. My guest on the radio next week, March 19th at 9am, will be Linda Leaming, author of Married To Bhutan and A Field Guide to Happiness. You can stream the show online here: WIOX Radio. In both books, Linda writes about her life in Bhutan, a tiny buddhist country in the Himalayas between India and Tibet, and what we can learn from Bhutan’s trail blazing accomplishments in areas like the importance of the arts, conservation and the well-being of its citizens. The government has a metric called Gross National Happiness that it measures often, instead of Gross National Product. Bhutan has decreed that a very large portion of their country will remain forested. There is no styrofoam and very few plastic bags in Bhutan. In Married to Bhutan, Linda writes that the Bhutanese “have foregone opportunities to make money off their considerable natural resources – lumber, water, minerals, plants and animals in favour of their quality of life. That alone makes it a world apart”. A Field Guide to Happiness is her second book on Bhutan and gives us tips on how to be happy.

These subjects were on my mind while was in New York City last week and between appointments decided to pick up Linda’s book on happiness instead of just ordering it online. I went to Rizzoli Bookshop, Strand Bookstore, Bookoff and Barnes and Noble. I was told that Linda’s books are not stocked in any Barnes & Noble in NYC, (but they should be – and he will put in a request to order them). Then, because I just decided to be on a mission – I was in NYC after all – I called Greenlight Books, Bluestocking books, Community Books, BookBook and Unnameable Books in Brooklyn but not one stocked A Field Guide to Happiness. It occurred to me that the book did not exist in New York City because if happiness was actually attained there, the earth would violently tip off its axis due to the sudden unloading of the weighty burden of abject disgruntlement in that part of the world. If everybody in NYC became satisfied with their life or just simply decided not to be in a huge hurry, or if everyone smiled at the same time, the city would crumble into dust and wash out into the ocean out of purposelessness. On occasion I smile at people in NYC and they look at me with a confused “do I know you?!” expression. So I caved and ordered the book online. It came from a happy place far away.

While walking around Manhattan in between meetings, I ducked into a restaurant and had a cup of tea at the bar while flicking through Linda’s first book Married to Bhutan. In it, she writes about how “Bhutan doesn’t need the world, but the world needs Bhutan”. The country is very wet and generates much of its electricity using hydropower and sells it to the Chinese.  Even Bhutanese paper is sustainable. It’s made from the bark of the Daphne tree: “when the bark is pulled off the tree for paper, it regenerates”, writes Leaming.

I stopped reading and watched the bartender mix lunchtime cocktails. Bartenders taste each drink using a straw by dunking the straw in a drink, putting their finger over the top of it to block the hole. When they pull the straw out of the drink, some liquid is trapped in the straw for the bartender to taste. How many drinks does a bartender make in one shift? How many straws does he use to taste, 300? 500? How many bartenders in New York City? A million? How many of these tiny, one-use straws go into landfill per shift? Half a billion? I’m exaggerating like a true New Yorker. Or am I? Even if there were only 50,000 bartenders in New York City, that’s still 25 million tiny straws that go into landfill every shift.

Tune in on March 19th at 9am to talk about all this and more with Linda Leaming on WIOX.

Linda is a writer whose work has appeared in Ladies Home Journal, The UK’s Guardian newspaper and A Woman’s Asia. Originally from Nashville she has an MFA in fiction from the University of Arizona. She teaches English in Bhutan.