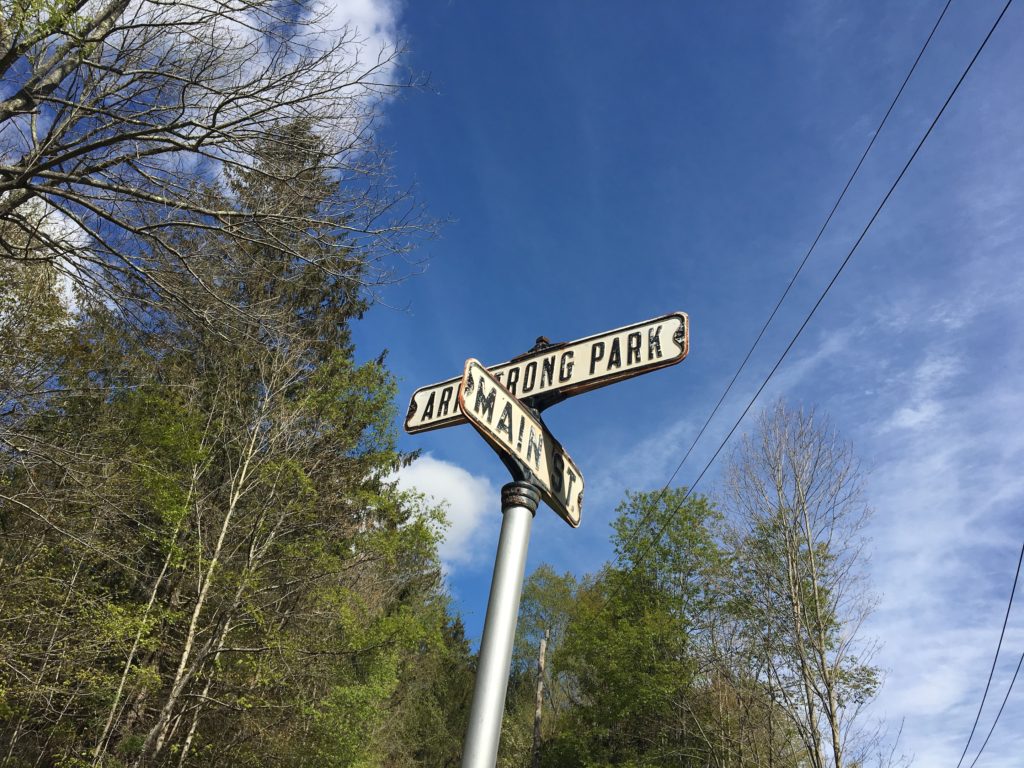 Bit hard for me to make a hero

of him, Matthew Griffin, though

lots of folks do. It’s hard not to

on his weathered face as he sat

front of his office (or shop)

over his head behind his chair. Maybe

he believed that founder stuff himself.

Armstrong Park must stay out of the public view,

a gentleman’s name need only appear

in print when he is married and when

The gentleman would be in residence

as folks liked to say, or seemed to.

They said it. The gentleman is in residence.

Never the lady, though she be there

nearly every time, except when the gentleman

comes up in the autumn-time to hunt

with his gentlemen friends. That fellow

was just the gentleman’s man, made a little

profit for himself buying furs and grain and

selling whiskey and deed-papers and

taking care of the gentleman

and the gentleman’s property.

and a few settlers to make things easier

wish anything, and so happy we are to

have the gentleman with us.

Griffin was an agent. A river man,

self-taught mostly, practical in the law

and surveying and the drawing up

of contracts that garner

just enough profit for the gentleman

that the Park itself, and the settlement

the Park provides for. One hand washes the other.

For the gentleman was of the family

who divided these mountains up long before.

His Tract, as they called it

in the deed-papers that Griffin or

for whomever was the gentleman then.

And the Park was his park. Carved

out of a hill looking west

over the new land. Mountain ash

and Paper birch, Sugar maple and

hemlock and jack pine came down,

not at Griffin’s hand, but at his voice

and eye as he hired and contracted and

stored and sold and made

So the gentleman kept coming back,

every August with his family to

again in the fall for hunting. Until

the gentleman died and another

father to son to son again

until there was no son.

and undesirables bought the hill

across from Armstrong Park.

was a mill, and above the mill

was a store and in that store

was the second post office in the whole town,

worn into the bank of the Bush by the Red Kill’s flow.

The first was down on the old Waterbury Place,

what was then Colonel Grant’s,

connected as he was to the Jefferson Party

through Burr, a name that still resides here now,

he got the Post Office. The Colonel was succeeded

by his son, and the son by Daniel Waterbury himself,

first ever Republican Assemblyman from this district,

back in the 1860 election along with Lincoln himself,

and then when the Rebellion broke out. Went

self-made man, and then Union College

up on the Mohawk and then to law school

from his city law practice to his family lands

when his Grant uncle died on original Grant homestead

lands at the bend in the river down there by Margaretville

of the town where the Dry Brook runs into the Fish

and the land flattens out wide. The Colonel

was the first to bring goods up from the Hudson

at Parker’s Ferry up over the old Post Road,

from the big river to the Wallkill, then up and down

to the Rondout and Sopus Creek, follow the stream

up over Belleayre, down the Bush Kill to Arkville..

Later, John Beadle put a store in Covesville and

they made him postmaster, too. Took the mail

up to all the farms and places upstream from there,

up the Vly Creek and the Emory Brook

ill in 1848 when Matthew Griffin himself

made postmaster and the beginnings of my village.

Born at the foot of the patent-holder’s park,

mid-wifed by his agent, Griffin,

postmaster & storekeeper, steward to the Park,

(make way for the big house!

grow below the August Park of river aristocracy,

from transition, change to meet the market:

those turned away at the inns of polite society

took the train to this mountaintop,

found a hill west of the Corners, opposite

here, make our place on the patent, the

Founded in the last decades of the nineteenth century,

from the anti-Semitism then ramming its way through the Springs and Beaches that were the tonier resorts of the day. A prominent city banker was turned away from the hotel he and his family had summered at for years.

That was the turning point.

The Senator saw river aristocracy parked on East Hill, so

he bought a sixty-acre rise to the west, put up the big house,

called his place Fleischmann Park, and invited friends and family to come:

a summer paradise in mountains that put to mind Austrian hills,

safe from society’s ugly turn. It took off. People came,

cousins and socialites, bankers and merchants,

on the flat below his place, where he put up a grandstand

and baseball grounds for his strapping sons to play, and

riding ring and stables for his thoroughbred string.

Soon, the locals saw advantage in putting up boarders,

working-class and clerking Jews who comforted themselves

Senator Fleischmann had made a fortune in yeast,

in the years after the Civil War, brought Viennese

pastries to the American centennial, then light, rising,

at the very moment his brother Jews were beginning

to be turned away. He was soon the richest man in his city,

even in his state, could buy and sell the goyim

much emulated in his eastern-saddle riding clothes

on Saturdays in the park. So, state senator now,

between stops in these Blue Mountains and got off the train

to inspect the high hills and broad valley and thought

so fresh in these cramped lungs I have, and coughed and

from the west, the first cough since the Blues had risen around him,

the first cough and not a single gasp and breath came so easy,

so he barked – for Senator Fleischmann, while a self-effacing and temperate man

were with him constantly ready to take his wishes and

turn them to action: “Find me the station agent.”

There was no station agent,

just a side-rail stop, and

Senator Fleischmann had to wait

as his young men scurried and

scuttled and ran and rode

the wagon of a kindly farmer who

took them to the law office –

if that is what you could call the one room

in a rustic chair outside the door,

of thick brown tobacco in his cheek

visible when he spat

to the question posed by the young men,

probably “Are you the land agent around here?” or,

perhaps, “Do you know

where my employer can look

maybe, “Are you the Mayor of this village?”

those ambitious and superior young men

asked, because Matthew Griffin would answer

“Yep” to just about any question that

struck him as leading to his making a dollar,

I’m guessing. No disrespect. These mountains

Matthew Griffin had come to these parts

over forty years before

from the other side of the big river,

a young man who had read law

for a week or two or three or four

in a law office in Red Hook

before setting out to walk the fifty

or so miles to the domain of his patron and

son-in law of the oldest and richest landed family in the state,

hero of the Revolution and scapegoat of the second war

with the English, who had been given by his father-in-law

only as an old man had finally decided

to use them for something other than tanning bark

and timber and bluestone and rents.

The General had decided to build a house

and an estate, a park in the mountains, and

the young Matthew Griffin had been chosen to be

his agent, just as these earnest young men

who approached him in his leaning-against-the-law-office

old age were the earnest and eager young agents of

Senator Fleischmann so many years later.

“Excuse me,” the oldest and tallest of the Fleischmann men had said by way

of introduction, and then the question of identity followed by the old man’s “yep” and then “I could probably find you a piece of land. Ain’t much here that

ain’t for sale if the price is right.”

And the price was most certainly right, as Matthew Griffin took the three men back across the railroad tracks to the farm of John Blish, who owned most of the side-hill that bordered the Mountain road, a two rut wagon track that worked it’s way pretty much straight up the side of what the locals called Kelly Mountain. Mr. Blish, spitting brown tobacco juice to punctuate each laconic sentence, was more than happy to greet the young men, set them down on the porch of his small whitewashed farmhouse, have the hired girl serve cool glasses of iced water, and drive a hard bargain for 60 acres of hillside that ran downhill from his farm to the rail siding.

“I can let you have it for, let’s see now, how’s fifteen dollars an acre

It wasn’t long before

the youngest and smallest of the young men

had made his way back down the Kelly Mountain road

to the rails where Senator Fleischmann sat

in his resplendent rail car smoking

Mr. Fleischmann was a great admirer of the humorists – and,

with dignity and not too much haste –

haste being something unfit for a man

sending his young minion back up the hill road

where his older companions sat,

having removed their jackets and loosened their collars,

and, not incidentally, flirting, just a bit,

with the hired girl – comely,

if a bit unwashed – who served them

Mr. Blish being a practical

to accept the draft, so,

while the oldest of the three

Fleischmann men stayed with him

on the porch, drinking cider

and ice-water in turns, smiling

with the old farmer and,

more intently with the hired girl,

Matthew Griffin and the others

rode in Griffin’s wagon back down

the hill into Griffin Corners where

used his keys to open the bank,

after sending a boy on the street

to rouse the Chief Teller, who,

with Matthew Griffin, opened the vault

and turned the bank draft signed by Senator Fleischmann

on his personal account in a reputable Cincinnati bank

which they, Mr. Griffin and the two Fleischmann men

took back up to the Kelly Mountain farm of John Blish.

Matthew Griffin drew up the deed

in Mr. Blish’s parlor and notarized it

and the deal was done. Mr. Fleischmann owned

60 acres of mountain just outside of Griffin Corners.

2 thoughts on “The Final Part of Fleischmanns, by Bill Birns”