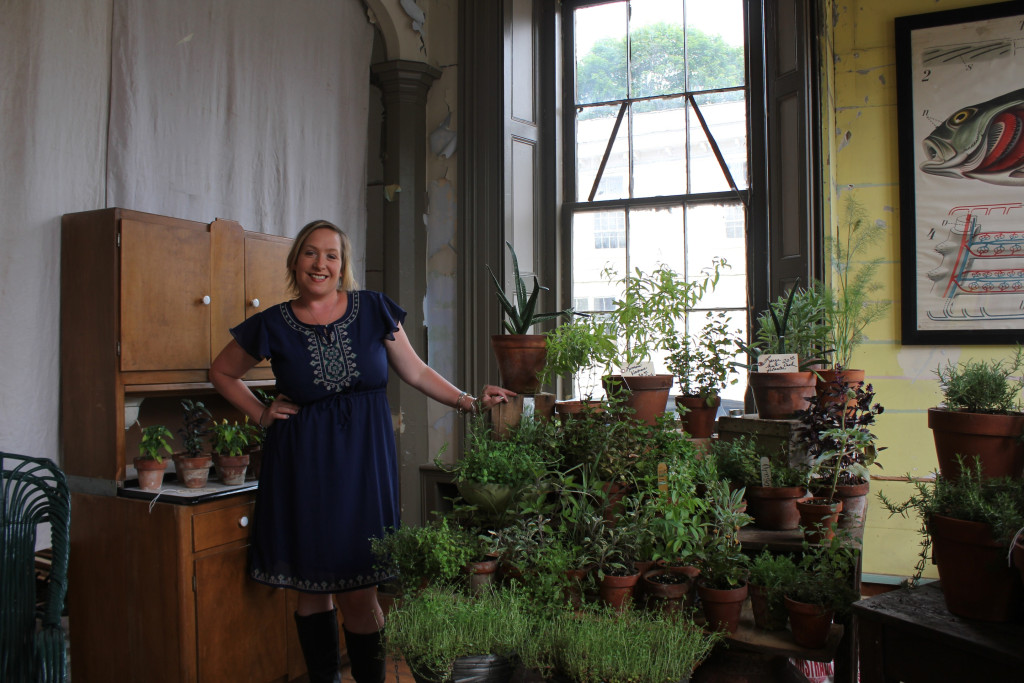 Louann Aleksander sells herbs, which she grows from seed, wholesale and in The Annex in Andes.

It’s going to be eight years on August 1st.

So what made you decide to move here?

We had friends who had moved to Andes and before that my husband would come up maybe once a year and he absolutely loved it. We wanted to get out of the rat race of Long Island. It was getting where you work to go back to work. We weren’t enjoying life at all.

What were you doing on Long Island?

My husband is an arborist and I worked for an outfit called Colorful Gardens in Calverton in the greenhouses. I did the seeding and the propagating in the nursery.

So what’s your background?

We just love plants and love watching plants grow and really enjoying people, enjoying the outside. It’s nice and peaceful.

How was it really a rat race in you were in such peaceful jobs?

Rent was so high and bills were so high that we constantly had to keep working, working, working. We couldn’t take out time to relax and figure out what our next step was because we had to go back to work and it was never enough.

So you decided to move.

Our friends moved up here and then we saw a house. You know, it was so nice that we could kind of slow down a little bit, but then we didn’t slow down and I opened my business and now I’m busier than I ever was.

It’s nice being extraordinarily busy for yourself though isn’t it?

It is. But sometimes I’m like: ahhh, I’ve got to get all of this stuff done and there are only so many hours in the day. But at the end of it when someone buys a plant and tells me how beautiful it is, it makes all the hard work worth it.

So are you from New York?

I’m originally from Riverhead, which is from eastern Long Island.

That sounds like quite an idyllic childhood. I don’t know what Riverhead was like back then, but I bet it’s very commercialized now.

When we were children it was wonderful. I lived near a beach, so I was constantly with my friends, running barefoot on the beach all day and there weren’t a lot of people around and you went fishing and you had fun. My husband grew up in a place where there were potato fields and he would run barefoot through them. As we got older, it got built up and then people were saying: you can’t come here, you can’t do that… We were looking for a place that was like our childhood.

I grow a range of different types of herbs, over 200 varieties, some that you’ve heard of and some that you’ve never heard of: the basics and the classics. Everything I do is organic, even though I’m not certified organic. I use non-GMO seeds. I do everything from seed. I don’t buy any cuttings or anything like that. Anything that is produced is produced on my farm.

Do you have a large farm?

Yes, we lease about 206 acres of property.

How much of that do you grow on?

Not that much of it, because some of it is wooded and some of it is not tilled yet. This year we’re going to put some highland cows across the street and letting them take the brush down.

What plans for the future do you have?

I want to add on to the greenhouses, so I can do a lot more different things with the plants. I want to get into growing all different types of plants, not just the herbs, but also the heirloom vegetable plants. Also, we want to get into putting the herbs into the ground and having maybe a few acres where you pick your own herbs, like U-pick.

So what acreage of herbs do you have?

Right now, I don’t have acreage. I have a greenhouse, which is about 18 feet by 41 feet. It’s a step under commercial: we are choc-full. We are really packing it all in there.

But it wasn’t too nice this past February.

How did that go?

It was a really tough winter.

Yes, it really was. You have to really love being in the greenhouse business to be up here.

Are you growing anything else?

Right now, I have my heirloom tomatoes and hot peppers that I am growing outside and they should be ready for sale in the next two weeks. I sell heirloom vegetable plants, tomatoes that you’ve never heard of. Last year, we did 30 different varieties of cucumbers. Nobody realizes that there are that many varieties. There are other things besides heirloom tomatoes.

Some are definitely good for pickling and some are good for just having in your garden, so you neighbor comes over and they go, what the hell is that?

I’d love to see some pictures of those.

Of course. Usually, people come to me to get something a little bit crazy.

Excellent. That’s quote of the day. What inspires you most about the Catskills?

That, if you have the chance to come up here and get your mind free from everything, you can really think about what you want to do and I think there’s a lot of entrepreneurship now up here. You can get something so one-on-one that you couldn’t get on Long Island. There’s nothing mass-produced. I think it’s genuine and I think we have a great spirit up here.

Is there such a thing as a day off in country life. (I think you’ve already answered that one.)

[Laughs] No, there’s not. It’s funny. We came up here saying we’re just going to relax, but no, because in the morning you have to check on the chickens, walk the dogs, water the plants and try to sell your plants and there’s always something to do. But at the end of the day if you can put your head down and just be like, you know what? I enjoyed my day. It’s hard work, but it’s enjoyable.

I love to grow lovage. It grows well on its own and I love Rosemary. It’s one of my absolute favorites. Literally to smell it, it puts you in an excellent mood. It’s so delicate, yet so strong.