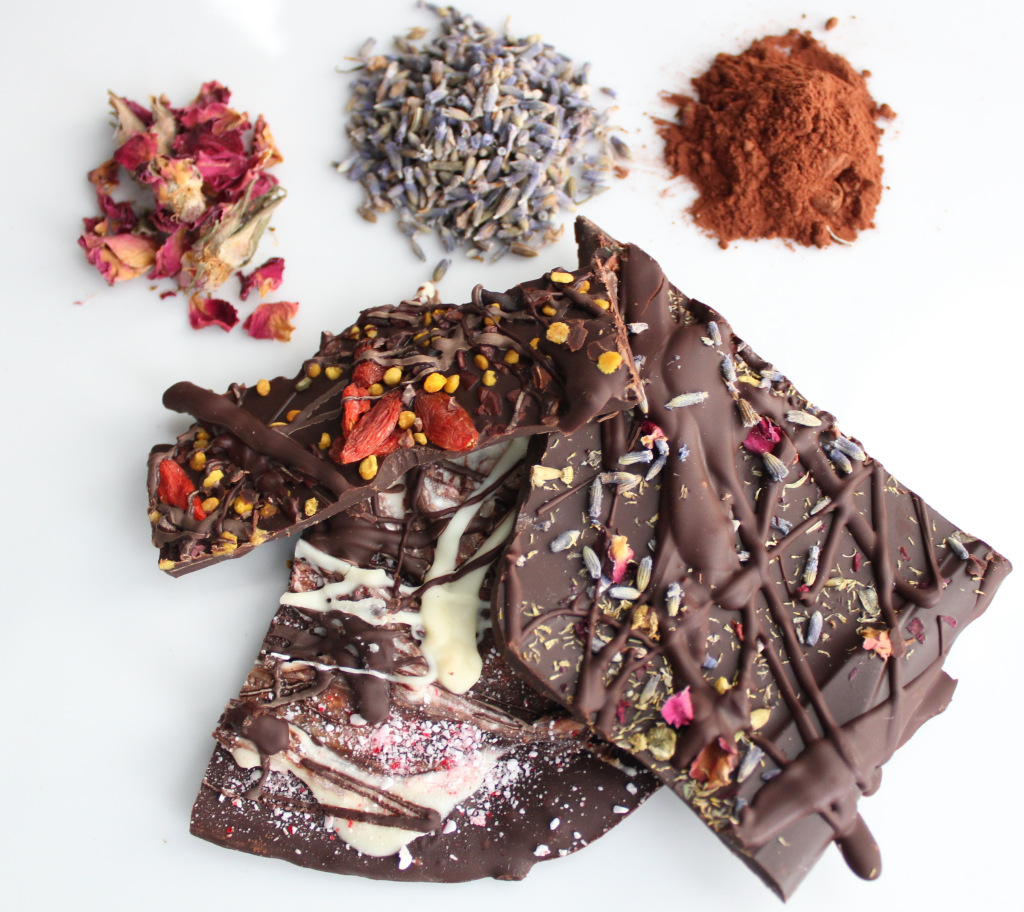 Girl and Bee sells chocolate truffles, chocolate bark and infused honey but it’s the chocolate bark that stands out for both its rough-hewn texture and exquisite organic embellishments which include goji berries, lavender, cacao nibs, bee pollen, peppermint and chamomile. Devastatingly delicious, the bark is a tactile experience, coming in palm-sized slabs and thin enough to permit a satisfying snap that releases a burst of color and aroma. It’s tasty and pretty: perfect for a holiday gifts. The bark comes in 4-ounce boxes for $8 and a 12-ounce tin for $20. If you’re in it for the truffles, they are each lovingly prepared by hand: thick, firm and intensely flavored by the likes of vanilla, rose and lavender. “Every truffle has had my hand on it,” says proprietor Melissa Zeligman who sells the 4-truffle sampler box for $14 and an 8-truffle sampler tin for $25. Gold leaf adorns the vanilla truffle like a little crown and combines a dark chocolate shell with pulverized Madagascar vanilla beans in the center. 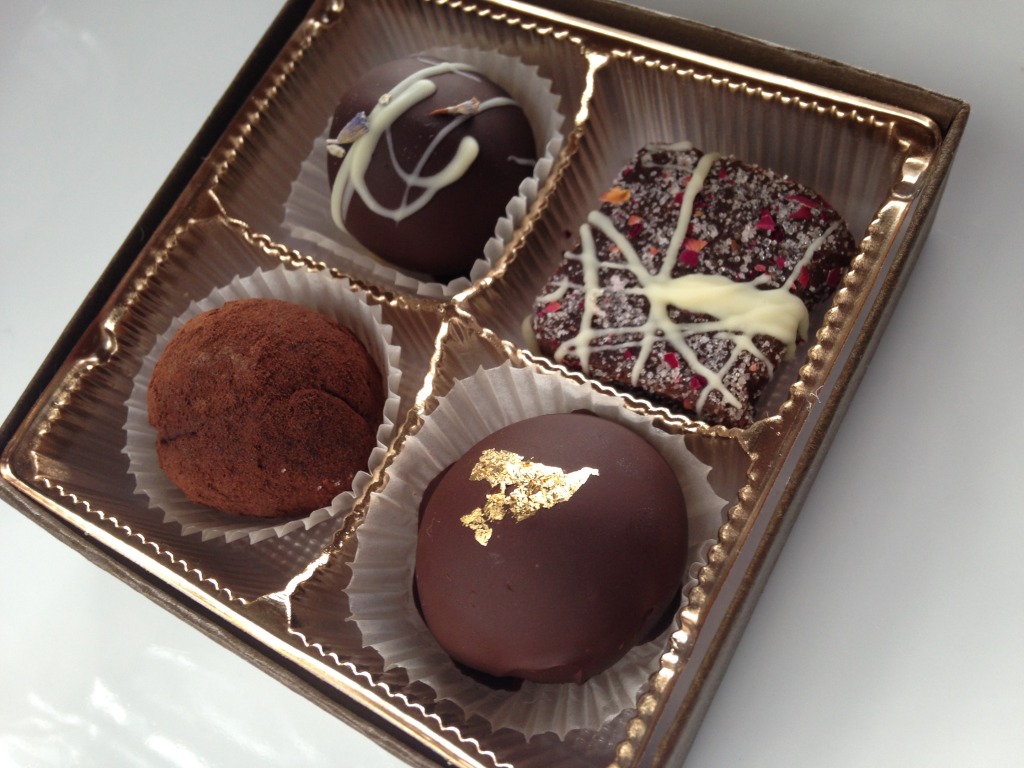 There’s more than a whiff of Vianne Rocher about Zeligman, famous in these parts for her cuisine after only having moved to the Catskills over Easter of this year. In the movie Chocolat, protagonist Vianne (played by Juliette Binoche) moves from place to place seducing people with her baked goods and Zeligman has spent her life doing the very same, only without the red cape. You’ll find her most days at Spillian, where she is Culinary Curator, chopping, sprinkling, tossing and kneading her way to fame. As down-to-earth as the Pennsylvania in which she grew up and as eclectic as the San Francisco she moved to in 1992, Zeligman spent 17 years working with a Youth at Risk program, moving from city to city as her job evolved, but food was her first love and something she practiced on the side. “I catered dinner parties for friends and made confections for holiday gifts for myself and my friends,” she says.

She made her first truffle at age 18 from the Silver Palate Cookbook from a recipe for Grand Marnier truffles. “As long as I can remember, I’ve always cooked,” she says, “I grew up in a very food-centric family. For whatever reason, cooking made sense to me. I understood the chemistry of food and it was a way of taking care of people and a way to be of service.”

Zeligman spent five years in San Francisco, four years in Denver, one year in Portland and then another five years in San Francisco. After she left the Youth at Risk program, in 2007, she moved to Massachusetts to join a private Buddhist monastery. There she remained until 2010 when she moved to DC to work at Elizabeth’s Gone Raw, where she learned how to make vegan, raw chocolate with a low glycemic index for people who are quitting sugar.

Zeligman agrees that chocolate should be a luxury and likes to make chocolate in small batches and seasonally. “We’re so spoiled and have what we want and when we want it. We’ve done a disservice to ourselves.”

She has “tugged on the sleeves of chefs and pastry people” she has admired throughout her career, offering her services in order to learn new skills but it wasn’t until she went to study at Jacques Torres in NYC in 2005/2006 that she met an actual chocolatier. The class “took her to the next level” and after that she “started tinkering” to achieve the base she now uses in her truffles. Order truffles, bark and infused honey here at Girl and Bee and find them at Home Goods of Margaretville from Thursday November 20th. 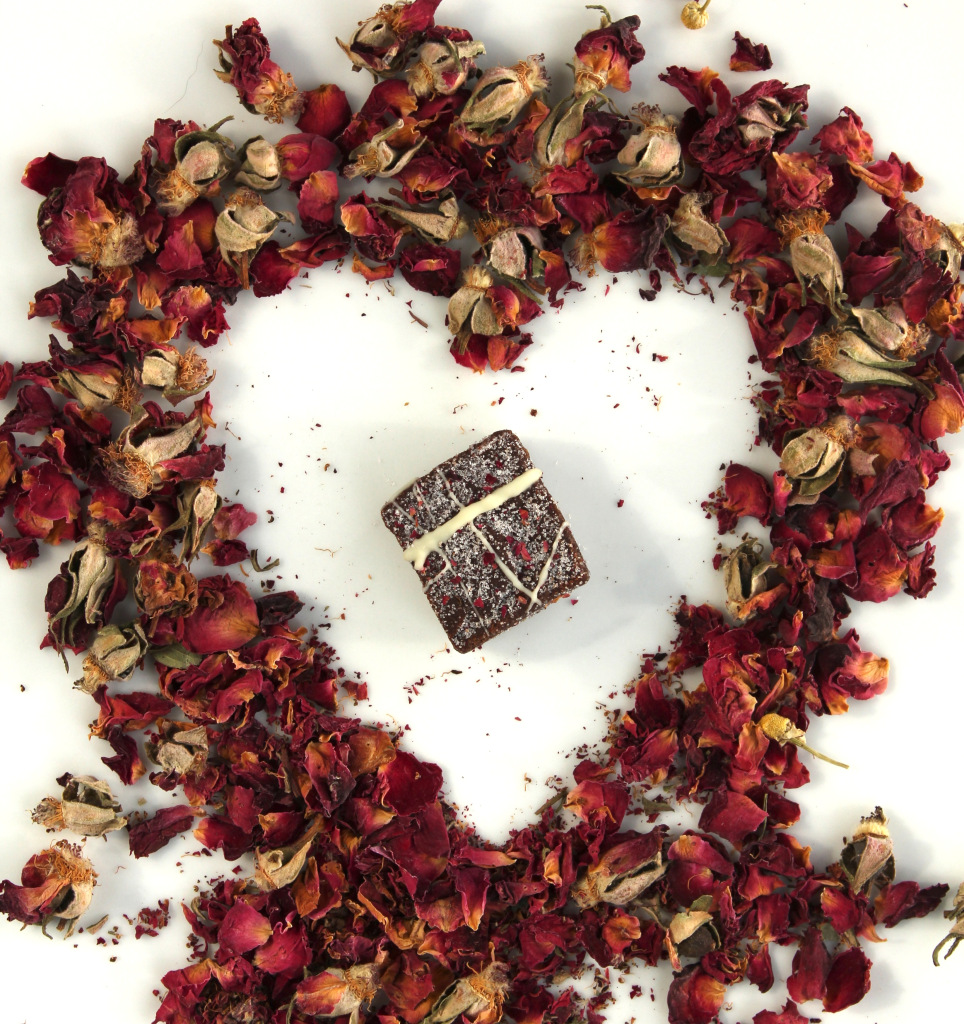