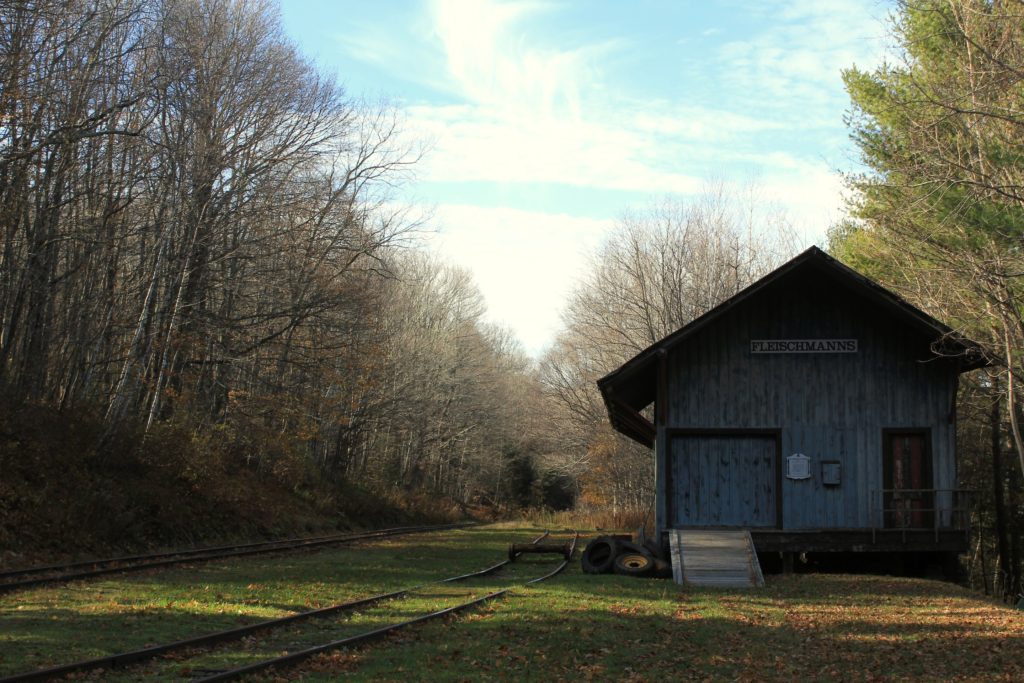 Parts 2, 3 and 4 of Fleischmanns, A Poem in Eight Parts

heirs to Senator Fleischmann, have offered

their good wishes and

the six and a half acre parcel

to the people of the Village of Griffin Corners,

to be used by the people in perpetuity,

insofar as no admission can be charged

for any event within the park and

that the park be called Fleischmann Park, and

a sum of fifty thousand dollars be on deposit

in the village bank for the endowment of the park.

the intention of the village to change its name to Fleischmanns.

These mountains have always been bought and sold

since native hands put marks on tricks presented them,

and Kings gave others’ land as gifts: a brother’s realm

passed to a daughter, Queen Anne, who gave the mountains away.

through who-you-know negotiations and palms,

perhaps, sliding a guilder or two in the right hands.

The good settlers of Hurley Flats had asked

the royal governor (who loved cross-dressing)

for woodlots and pasturage, up-country,

in the wild lands, beyond the west slope.

Didn’t get it. Rich folks did.

(it ought to be here said) the grant was made.

hidden in the deal, insiders, self-seekers

were granted the land settlers had sought –

middlemen! Those pioneers you grew up admiring

lost the land to speculators,

and power and family. They won.

first “one York shilling per acre”

for one hundred acres of land”

(I am quoting here from an old history).

gets all: an American aristocracy!

principles, intermarriage to keep out

became image of the old.

If farms were leaseholds, were farmers serfs?

of ambition and a smart Scot

named Livingston come to this country,

bought and sold, made himself

valuable to the right people, married up,

and got himself a patent from the King.

His manor on the east side of the river,

a couple thousand acres along the shore

and three hundred or so more far inland,

shrewd son of a gun he was, Robert

stole himself all the land-between to make

his manor – hundreds of square miles

he made himself a lord in our new world,

made himself progenitor of a line of patent lands

for the colonial aristocrat deeded to

a Livingston and the land.

Fleischmanns came into being twice:

first as Griffin’s Corners in

as Fleischmanns in the 1880s when

Mr. Charles Fleischmann decided that if Jews were going to

face insult and refusal at goy hotels, then

he’d found his own resort where that sort of thing

He took the train in from the Midwest,

the rich old goys had a park

end of the village, and

sixty acres that included the hill

on the west end of the village.

Those goys were the aristocratic, river valley

the General had built their mountain retreat

where the moneyed Episcopalian Armstrong

and September before returning to

to spend a couple of months before

returning to their Fifth Avenue houses

for the season. General Armstrong,

had sent his agent,

to scout out his 8000 acre property

up here in the mountains. So,

Griffin Corners, when the agent

established a Post Office in what should have been

a couple months after

the completion of his house.