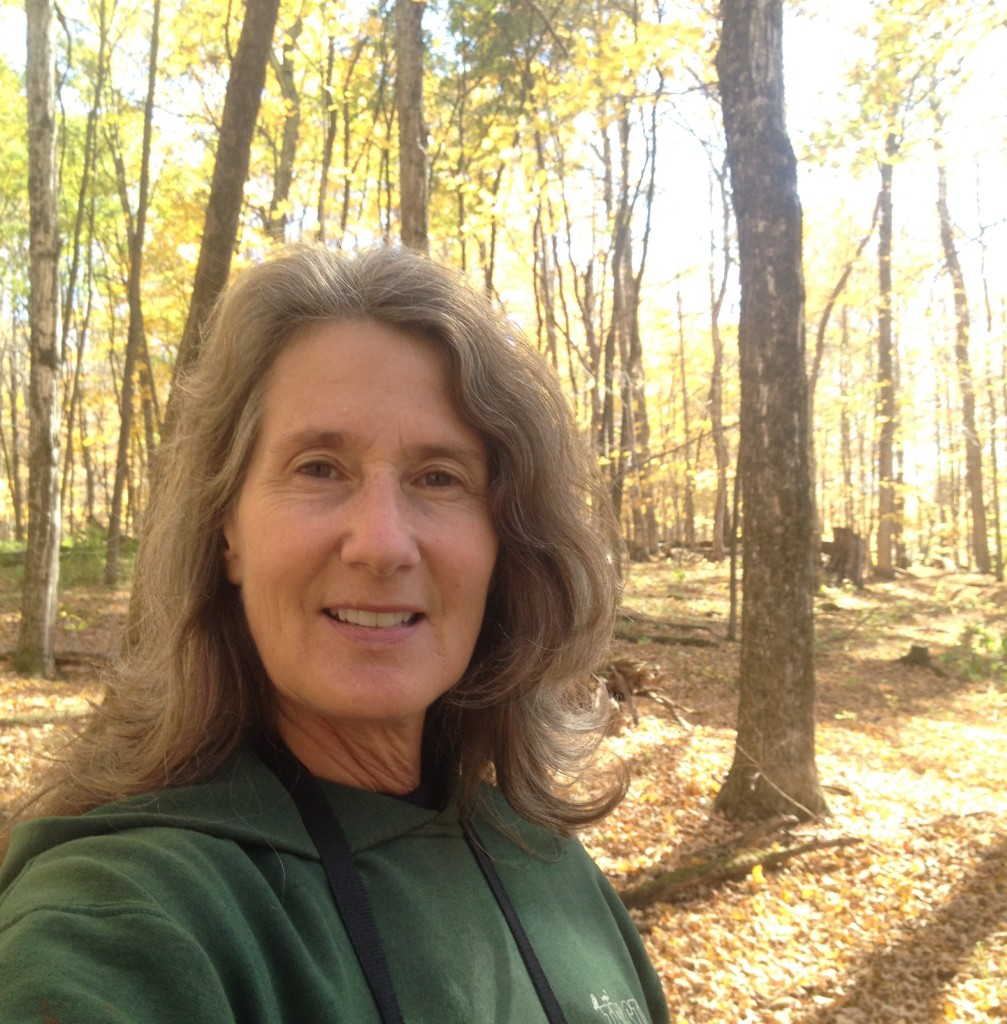 PD: I was born in Margaretville, so I’m a lifelong resident except for five years that Michael and I – the year after I got married, I was very young – we moved to Texas. We lived there for five years so we could finish school for basically free. Then came back and started raising our family here in the Catskills. So we moved back to my Dad’s farm and he gave a piece of it to each sibling.

So my children grew up climbing on the same stone walls that I grew up climbing on and also my grandchildren are [doing that] as well. My brother and I used to bring the cows from the barn down the road up here to this field and then take them back again at the end of the day to be milked.

And how big was the original farm?

What do you do for work here?

I work for the New York City DEP.

I want your job.

I’m in land management. I hike the mountains for the most part, that’s what I do to make a living here, but what I do here really is enjoy the mountains. I enjoy my grandchildren. My husband and I have a lot of things that we do just to enjoy being here rather than thinking about working all the time.

That must keep you really fit, hiking for a living.

How does one go about getting that job?

Is there a list that I can put my name on?

No, I think you just have to go to the website and look at the listings from time to time.

So how did you get that job? What does it involve? Being a steward of the land?

Right. So, I got my college degree and someone had asked me if I would be interested in interviewing. They let me know that there was a job opening and asked if I was interested, and I said yes, so I did interview for the job and I got it. But for the first few months, I was actually working on the septic program and then they opened up the natural resources land acquisition program and asked who would be interested in being involved with that. That program started when New York City started acquiring land from private landowners in the mountains in order to not have to put in a billion-dollar filtration system for their entire water supply. The EPA said that if you can protect the land at the source, then we would not require you to put in a NYC filtration system. That’s when they started acquiring land from people and realized that they needed land managers to take care of the land.

What was your college degree?

How do you go from biology to land management?

The person who interviewed me for that aspect was impressed with my work with endangered species and was thinking that that might come into play at some point in New York City’s management of land. It hasn’t so far, but it was why I got that job. To tell you the truth, a college degree is not required for employment by the DEP in this type of a job.

What was your day-to-day job?

I am managing the land that we already have which means I have maps and then I go and post and paint property boundaries. I deal with neighbors and look for trespassing and deal with that. We also have a lot of recreational users on our land, so there are always questions that need to be answered. Often we go out on the boat in the reservoir and I work at the Schoharie Reservoir. So there are a lot of enjoyable aspects to this job: helicopters, planes, ATVs and boats.

Have you hiked the Catskills 35?

I have not. Because I hike for my day job, I really do not want to hike as a hobby as well. I enjoy it, but I enjoy it enough during the week that I feel that I don’t need to do it at the weekend. What I have for my hobby is that I’m very involved in the Audubon Society, which is a big bird club. I do a lot of work with eagles and I am trying to get more proficient with other raptors. So for example, next week, I’m going to take a day off and go down to New Jersey and work with a friend who is a bander. We will capture and band raptors as they come through for migration: sharp-shinned hawks, coopers hawks, red tails and the occasional other species.

That’s much closer to your college degree. Is that something that you’re trying to focus on – to get back around to?

Precisely, because I was always intending to work with animals so that even at work I help out the wildlife department for DEP as well. So we do a lot of work with bald eagles and other wildlife management, so I’m involved with that.

You really have to love nature to grow up here.

No, you’ve got it backwards. If you grow up here, you really love nature is the way that it works because its what you grow up with. You grow up playing in the streams etc.

I must be comforting to have this kind of legacy. Does your family go back far in this area?

Yes, Fleischmanns used to be called Griffins Corners and we were the Griffins.

I have a map on my wall with the original Griffins Corners on it.

So between the Reynolds and the Griffins, they were major families in the area, so we do go back quite a long way.

On my map there’s a place that I don’t think is around here anymore.

There are lots of them I’m sure. If you go to spend some time at the history museum next to the library in Fleischmanns, they will be able to fill you in on all that.

So where did you meet your husband.

So everyone goes to school at the Margaretville Central School and I was in class with his brother. Not only that, but all farm families know each other too. My parents knew his parents because his family had a farm two mountains that way (towards West Kill), so I grew up knowing who the DiBenedettos were.

So that is a long ride for the school bus. How far does it go?

Well, some kids probably have a 45-minute ride for sure, maybe an hour.

And that was the main school in the district for the whole area.

Well, there used to be two. Fleischmanns had a school until I was in fifth grade and my sister was in the last graduating class for that school and then they merged with Margaretville.

So what sort of farm was this – a dairy farm?

Dairy farm and then there was hay in the summer to feed the cows. Before my father had cows, his family had also planted cauliflower. Actually, the next field over there was called Cauliflower hill, that’s how we designated different areas of the farm. I think they also had sugar beets for a while.

There are apples everywhere. Did every farm have an apple orchard back in the day? Did they just graft a few trees or plant them?

I don’t know exactly how the whole history of it started. It was kind of a Johnny Appleseed type thing where somebody had seedlings and farmers probably got the seedlings from them and then everybody planted their own batch.

For people to use: pies, eating apples, apple sauce and apple cider.

For me, it’s my sense of place and I am borrowing that phrase from Sally Fairbairn who wrote an excellent article a few years ago in a Catskills magazine. I’m just starting to realize that this farm and these Catskills are in my blood and I think that that’s literal also because, for instance, when you grow up and you’re a child on a farm you eat dirt, right? I’ve eaten this dirt. When you’re trying to see if the hay is ready, what you do is, you pull a piece of Timothy grass out of its sheath and you chew on the end of it to see what the moisture content is. If it’s right you know it’s time to hay and I’m sure my mum did that when she was pregnant with me and I’ve done it myself. I think elements of these mountains are in my DNA and I feel it very strongly especially with my grandchildren being around me here. I’m focusing on that a lot lately. I’m very mindful of that.

Do you envisage your children staying here? Because that’s very lucky if they do. Young people move away and how do we prevent that?

Well, I think it’s got to be an economic decision. Every decision is usually an economic one. So they have to have a way to be able to stay. I think most people who grew up here like it and do want to stay. Both of my daughters moved away to college and I was very surprised when they both moved back. My son never moved out. He’s pretty established here with his work. So I think they are here to stay and I know that I’m very lucky to have that. So I think it’s going to be a matter of finding the niches that allow young people to do what they want. These days I don’t think it necessarily means making a lot of money. I think it means living the way you want to live. With the local distillery in Arkville opening up and people seeing that weddings are big business here, I think people are starting to realize that the Catskills can be, in and of themselves, enough of an economic reality to stay here. It’s just a matter of finding the right position to fill or job to do.