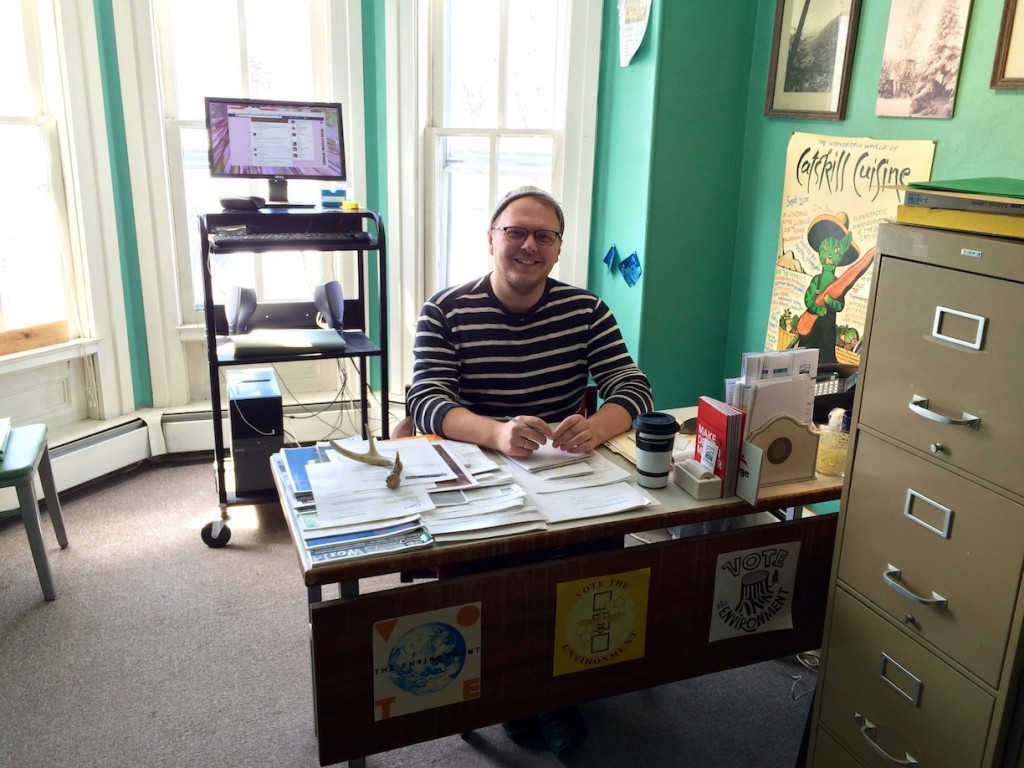 © Nicole Vente – Erik at his office in the Catskill Center

Erik P Johanson has lived in the Catskills for little more than a year, but has already developed a business plan for the redevelopment of the Maxbilt Theatre in Fleischmanns, which has resulted in the building being put on State and National Register of Historic Places in 2014: a formidable achievement in such a short time. He now works full-time for the Catskill Center in Arkville. After having lived in New York City for ten years, Erik and his boyfriend tried the Berkshires, New Mexico and looked to purchase property in Los Angeles before buying a house in the Catskills and moving here full-time.

What first brought you to the Catskills?

About six or seven years ago, a good college friend of mine suggested a group of about eight or ten of us, who had all known each either since high school in Chicago or from college onwards, get together and rent a little place somewhere. He found us a beautiful little ski lodge with a hot tub and a view over in Roxbury, so we rented it for a long weekend and kept on doing that every summer and fall ever since. That was about the time that the Roxbury Motel opened and I was aware of the Catskills. They were always on my radar. That was the first love affair that I had, just one of those beautiful autumnal weekends, driving around.

Where did you study?

I went to Eugene Lang at The New School and studied Science and Technology in Society, a liberal arts degree. My father’s an architect and I have always had a passion for architecture and design. I fell in love with New York and, after I graduated, I knew I wanted to do something with an environmental focus, so I went to work for a hotel development company that was trying to build one of the first zero-emission hotels in the world. [After the group lost funding], an opportunity opened up at NRDC where I was working in development for a while, but then I was part of a 5% budget cut – last one in, first one out – and after that, it was a fun time living in Brooklyn where a lot of my friends were going through the same thing. I moved out to Bushwick, lived in a big loft and hosted parties for an art gallery and things like that. I worked for an art magazine called Tar for a little while before it closed.

So why did you move to the Catskills?

Fernando and I both realised that we could live where we wanted. We had this fancy loft apartment in a hip neighbourhood in Brooklyn that people always wanted. The economy in Australia apparently was strong enough that we constantly had people willing to pay prices competitive with a large hotel room in Manhattan. I was working remotely, as a consultant to a hotel services group, as was Fernando. So we put it on AirBNB a few times – this was before the final determination that you can’t really lease for less than 30 days. Now these short-term AirBNB things are pretty much technically illegal. But for a brief period of time, it was totally doable, and so for periods of time here and there, we went out to East Hampton, decided to try the Berkshires for a while and lived in New Mexico. It was in New Mexico that I thought, hey we haven’t lived in New York for four months and I don’t want to go back. We were staying in this thing called an earth ship outside of Taos. It was my dream lifestyle in a sense, where you know everything is conserved, preserved, efficiently used. There was a real sense of community. The people that we met there, even in the dead of winter were fascinating and interesting folks and to just look out the window and see these Aloe plants while there was snow falling around with the mountains in the distance. It was sublime. We went to the bank and once we got an approval figure for a mortgage, we decided to look in other places like Los Angeles and the Catskills.

Working in San Francisco for a summer had opened my eyes to life beyond the urbane, city person and I still definitely consider myself who’s plugged into the cultural life of the world. I think for me, after having gotten it out of my system, living for ten years in all parts of New York City, I feel like I’ve got that under my belt and I’m now looking to bring that perspective up to nature.

What do you do for the Catskill Center?

My job title is Project Manager. I had a consulting gig that ended six months into moving up here and at that time I sort of had the idea that I would start working part-time for a real estate broker and I started to take the classes. Then about two weeks before the classes, a part-time position opened up here at the Catskills Center. Then a couple of days before the classes, they cancelled them due to low enrollment, so it luckily worked out.

I’m working on getting the Maurice D. Hinchey Catskill Interpretive Center off the ground, which has been a 30-plus year project for the Center, but it is now being built. Last week, I was up in the library here and going through newspaper articles from 1970 reading about people being skeptical that it was ever going to be built, which was funny.

It’s a transformative place for the region in that there isn’t really anything like it. I remember coming up here six years ago wondering if I was in the Catskills yet and not really being able to tell. The CIC doesn’t feel like a nature preserve. I think it’s going to be an opportunity for people who come up here to really understand what’s going on up here: the history and how it’s related to the American identity.