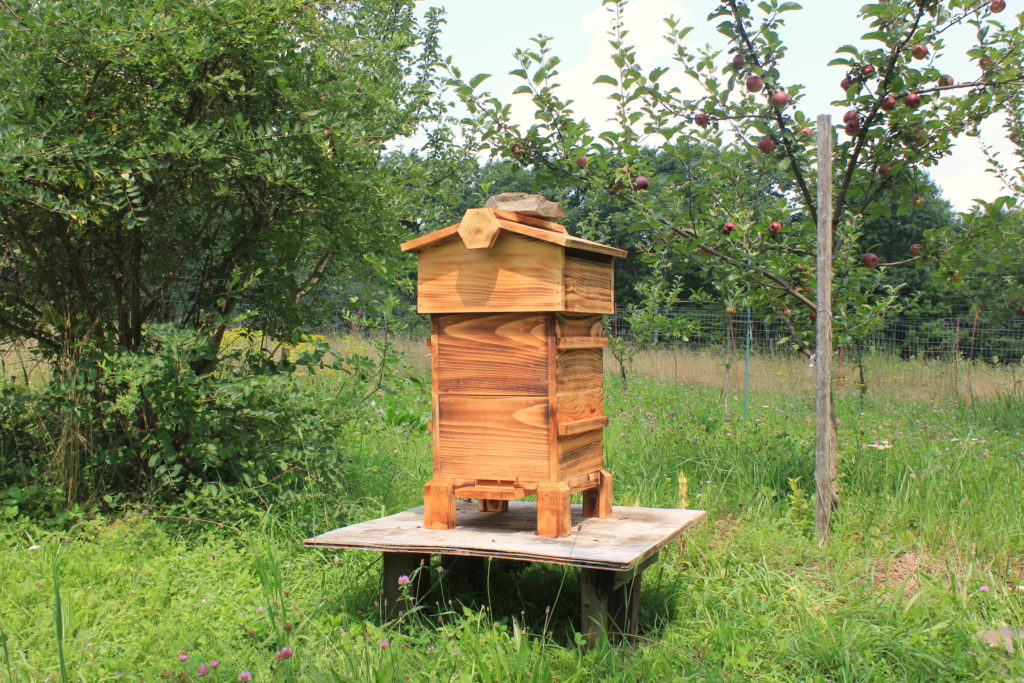 Six weeks ago, we caught a swarm that was attached to a tree close to our first hive and transferred them to a new, temporary hive. A few days later, we moved them to this new Warre hive (pictured above) – a top bar hive – that comes with viewing windows at the back, so you can see what’s going on the hive without pulling out the frames (pictured bottom).

It’s not clear whether the swarm on the tree was a group of our own agitated bees in the first hive that had been robbed several times. It’s possible that they made a new queen and split. However, six weeks later, this new colony in the Warre hive is very calm, unlike the bees in our first hive, the occupants of which are occasionally defensive. (This can only be an advantage when a hungry bear comes to collect the honey later on in the year. A bear has already come within sniffing distance of the hive – he left evidence of his visit – but departed without trying to take anything despite the heady aroma of honey around the hive. The bees are docile when they’re foraging – now the Goldenrod is out – but are always prepared for another invasion. This trait may cycle out with each new wave of brood.) END_OF_DOCUMENT_TOKEN_TO_BE_REPLACED

Our early attempts at beekeeping failed when our bees died over one of the Catskills’ harshest winters four years ago and we never got back on that horse again. Past Catskills winters have been brutal with night-time lows as low as 15F recorded on our thermometer, but that was nothing compared to the temperatures we have just been though this winter: -19F over this past Christmas and the New Year. Not sure how any creatures except the penguin survives these kinds of temperatures, but year after year, we find bumble bees pollinating our crops. They must survive in the wild somehow. END_OF_DOCUMENT_TOKEN_TO_BE_REPLACED