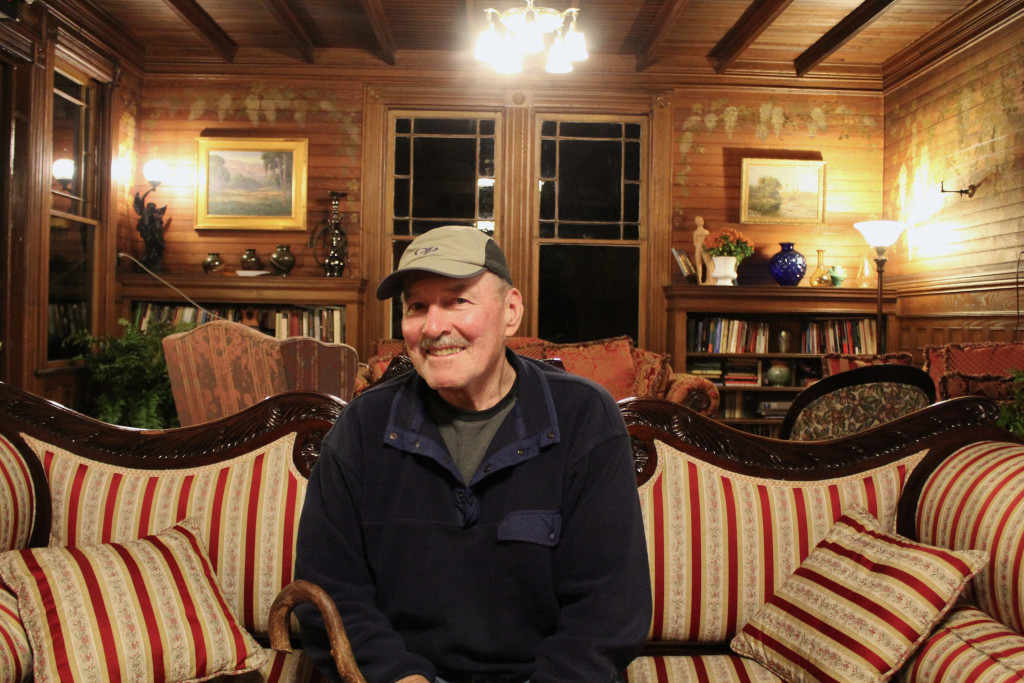 JN: What brought you to the Catskills?
JM: I guess a love of the forest and the outdoors. Nancy and I used to ski a lot up in Hunter and Windham, but we didn’t want to be in a ski-town, so we looked further afield. Plus, we figured that a lot of the open space here would be protected because it’s in the New York City watershed and won’t be highly developed which is what we were trying to avoid.

Where were you living before you lived in the Catskills?
We were down in Long Beach, Long Island.

I have friends there.
The reason I wound up in Long Beach first is because I was born in Brooklyn, but I was big into surfing and fishing and all that, so I found a little studio apartment in Long Beach overlooking the ocean. It was very expensive at $70 a month. [Laughs]

When was that?
A million years ago, but it was great. I was 21, or whatever, and all my buddies would be calling me and asking me if the surf was up. Plus, we would go fishing.

You were surf monitor?
To a degree, yes.

So what did you fish for?
We had a small boat and then got a larger boat, what they would call a Jersey Skiff. A buddy of mine had it built by a Norwegian boat builder. We fished primarily for striped bass and did a lot of offshore fishing for sharks, marlin and tuna about fifty or sixty miles off shore where the Gulf Stream came through.

So how do you go from beach guy to mountain man?
If I weren’t out in the ocean, I would be up in the woods somewhere. I was a bow hunter and bow hunting is a bit different than gun hunting. With bow hunting, you really get integrated into the forest. If you’re a cop in the city, you can go through all the BS on the city streets and get out and get up into the woods and it clears you mind.

So you were a NYPD cop?
From about 1961, but first I went to Ranger School up in the Adirondacks that’s where I learned forestry and surveying and all that stuff. I really loved it. In high school, I rebelled. I hated it and almost didn’t graduate. I was bored stiff and then when I went to Ranger School years later, I got the second highest grade they had given out.

Tells you something about schooling and teaching doesn’t it?
It does. I’ve always had the feeling that kids need a break. You go to school from kindergarten to college and you never get a break. After high school, you should take a year off and go around the world. Well, not all around the world, but travel. After high school, my buddies and I went to Mexico and South America and really had a good time.

That’s really the only time you can do it before you get married and have kids.
Exactly. Although, if you married a flight attendant like I did, you’d get to fly all over the world free.

Have you done that?
I kind of kid around, but I have flown to Europe to ski and down to Hawaii and South America. Not Asia though because I have a thing about population density.

New York City is some population density.
Exactly. That’s why hunting, surfing and fishing are needed when you’re a cop in the city. That’s the break.

So what was it like being a cop in New York City in the sixties? I can’t imagine how exciting that must have been.
It was different that’s for sure. Luckily I was in the good precinct, but worked with good guys and I made good friends. You’d have bad days and good days. It was a wake-up call for me because I was a country kid and people were nuts.

So where did you grow up?
Well, I grew up in Queens but we had a lot of parks and woods and that was my thing. All the other kids would be playing ball wondering where Jack was. He was up in the woods. I made friends with a lot of other guys and we’d go fishing and hunting together.

So what made you decide to become a cop?
It’s interesting. After Ranger School, I was a surveyor for a while, but still had this angst to get out and go places. We decided – three of us – to go to Mexico, so we went to California and did some surfing there. Headed down to Mexico and were there for a few months just surfing and hanging out. One of the guy’s father called and said that we had passed the civil service exam, which was something you did when you were young back then for the possibility of a job in the police and fire department. So one fella, Roger, did go back and became a cop, but we decided to travel more, going fishing in Wyoming and other places. When we finally got back Roger had become a cop. He said: “it’s really cool. You get a gun and shield and a pay check very two weeks!” That was the attraction: some money coming in. Some guys become a cop because they want to, but for me it was the regular check and a lot of time off.

What was the first day on the job like?
It was a whole different world all of a sudden and you had to become accustomed to it. The upper west side at that time was crazy, but you got used to it. Back then, you could take your overtime in either time or money. So I would take mine in time. You were making so many arrests and you’d sit in court all day the next day and that would be overtime. My wife and I – all we wanted to do was travel – so I built up time, so much so that I went to New Zealand for two months without a single day of vacation. I wasn’t interested in police work. It just wasn’t my personality.

How many babies did you deliver?
Two, but they deliver themselves basically. We got a call once to a place where there were a couple of abandoned kids: two kids in a crib. It was kind of tough, you know? It’s tough to see kids have no chance at all at a normal life. The other one is that you have a little old lady in an apartment and she’d get older and older and eventually die. Neighbors would call because of the smell and we’d have to go and take her out. It’s horrible to see people live their lives all by themselves. It can be very traumatic.

Where’s the best place you’ve been?
I always tell people, including my son who hasn’t been there yet, to go to New Zealand. My wife and I went there in 1973. We rented a camper and travelled all over. The people were so great and so friendly. One time we went out to visit a sheep station and when we got back there was a fresh apple pie in our camper with a note: “we know you Yanks like apple pie”. We hung out with the Maori and went fishing with them. The trout was incredible and they used to smoke it. So we would pick up a load of smoked trout and have it in the camper when we traveled.

What do you do now upstate?
I sit around a take interviews. [Laughs]

Because you’re so famous? [Laughs]
Sure! I actually retired when I was about 45 and came up here, but Nancy was still flying. She worked for 38 years. I bought this farm of 235 acres, which is now 370 because we bought the farm on the other side of the road too. I was President of the Catskill Forest Association for eight years and on the board for twelve years. When the city started doing the land acquisition program, I was on the team negotiating with them for things like conservation easement contracts. I’m also the President of the Catskill Landowners Association and The Catskill Club. I started a club called The Andes Hikers back in the Year 2000 and after a while, it grew to 120 people. So we decided to form the Catskill Mountain Club.

Can you imagine 120 people trying to park at a trailhead?
I know. We had all sorts of different characters hiking too. One time we had a Hollywood actor in the club. Hiking attracts different people from all different walks of life and you have different conversations about things you don’t really know about. That was an important part of it. I mean, what do I know about Hollywood?

Jack McShane was photographed at Spillian in Fleischmanns, New York.